Craig and Tag steal the limelight at London’s Big Half 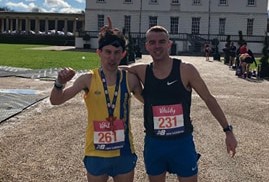 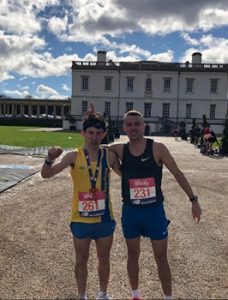 After performing well in the event last year, Rob McTaggart and Craig Palmer were back at the Vitality Big Half hoping they might each be able to seal a seismic sub-70

Whilst much of the attention was focused around Mo Farah’s exploits at the front of the field at the Vitality Big Half, there were some far more interesting events happening slightly further back.

As the cameras for the BBC’s Red Button service switched back to Steph Twell who was leading the women’s race, there were a couple of familiar faces close by that the Dorset running fraternity would recognise.

Bournemouth AC‘s very own Craig Palmer was the man driving the pace of the group featuring Steph Twell and right alongside Steph for much of the early part of the race, was the unmistakable yellow and blue vest of Rob McTaggart.

The weekend didn’t get off to a great start for Craig when he arrived in London and realised he’d forgotten to being his BAC vest. That meant having to make a trip to the shops to buy a new one.

That made a noticeable difference throughout the race as he kept hearing Tag getting shout-outs because he was wearing his Bournemouth AC top and since he was just wearing a regular black vest, Craig missed out on all the benefits from that.

Both Tag and Craig competed in last year’s Big Half race, with Tag bringing home a fantastic new PB of 70:25 which put him in 34th place. Craig didn’t have quite such a good run but still ended up finishing in 51st place, finishing in a time of 71:20.

Could they go one better in this year’s race though and get that illusive sub-70 time to really put them up there with the elites. There was only one way to find out and that was to give it a try.

The Vitality Big Half is a great prelude to the London Marathon, covering much of the same ground but doing so in a reverse direction.

The proceedings got off to a slightly rocky start for Tag though as he hit the deck going round a corner on the third mile. It also just so happened that the BBC coverage had flipped back to Steph Twell at the time so Tag’s tumble was broadcast live to the watching millions.

Fortunately, his experiences of going to ground during various National and Southern Cross Country races in the past seemed to pay dividends as he was somehow able to bounce back up in one free-flowing movement and continue without losing any ground on the pack he was running with. There was even a suggestion that it may have just been a stunt for the cameras. 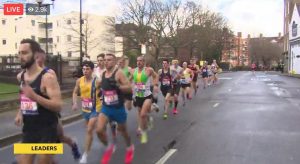 The race rolled on through the streets of London, fast and furious, with Craig looking really strong at the front of the group and Tag looking fairly comfortable alongside Steph Twell. The pair stayed with Steph up until around the 10 mile point when they began to edge away.

Steph was starting to struggle a bit without the BAC boys around to pace her and her lead soon looked under threat. Charlotte Purdue was closing the gap on her fast and once she caught Steph up and breezed past her there was only going to be one winner in the women’s race. 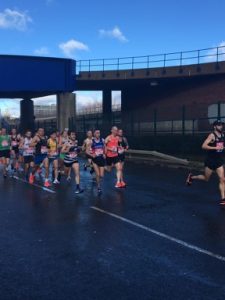 Finishing with some super-strong miles in the latter stages of the race, Craig went on secure a stunning new PB time of 69:37, putting him in 32nd place.

The last two miles were a death march for Tag but he could see that a sub-70 was still within reach. He knew the pace of those last two miles would have to be quick though to stand any chance of doing it. 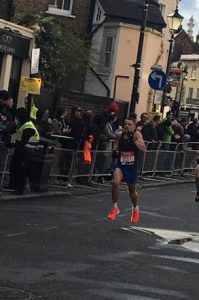 Craig makes a final push to the line to record a spectacular time of 69:37

When he got to the line he was overjoyed to see that he’d finished in a time of what he thought was 69:58. His heart then sank for a minute when Craig’s official time came through and they’d rounded it up by two seconds. If the same thing had happened to Tag, he would have kicked off. To miss out on a sub-70 after all that would have been devastating.

When his time did come through though, it was confirmed as 69:57, which was a cracking result for Tag, putting him in 41st place in the overall standings. 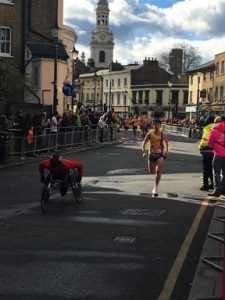 To hit that level of performance and get such great times despite the windy conditions bodes extremely well for Tag and Craig’s prospects at the London Marathon.

In fact, if anything, Craig was actually a touch disappointed with his time as he feels that on a calmer day, he could have done it in 68:30. That shows the sort of high standards he sets for himself.

The only thing missing from Craig’s perspective, besides his BAC vest of course, was the beers afterwards. He had to do a five-to-six mile cool down afterwards so there was no opportunity to celebrate with a nice cold one.

In this kind of form though it will certainly be interesting to see what Craig and Tag can achieve on marathon day. One thing is for sure though and that is that they’ll find their way into the spotlight one way or the other and Craig has vowed to ensure he remembers his club vest for next time. 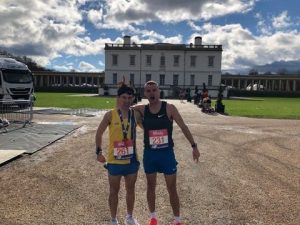