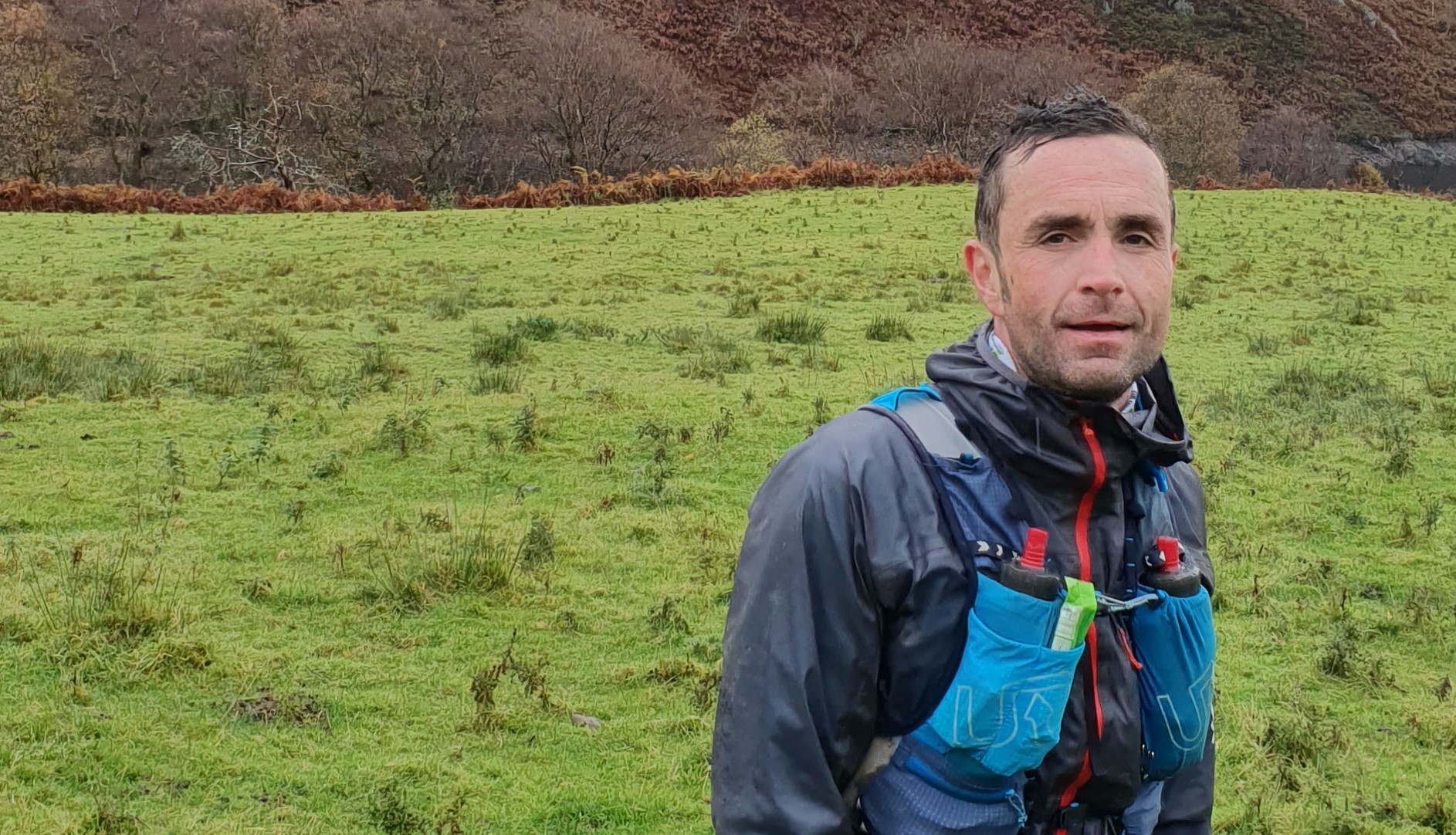 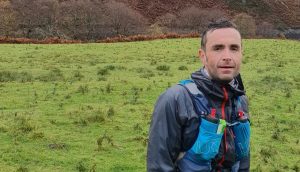 It was only a 75 mile trek along the Glyndŵr’s Way National Trail in Mid Wales, in the dead of night, on Halloween. That was what Damian Boyle faced in the Thwarted Rebellion Winter event. What could possibly go wrong?

We don’t get to choose what floats our particular boat when it comes to running. It chooses us. That’s what Damian Boyle believes anyway and that’s why he’s found himself dragging his body through the mire on numerous occasions on some of the longest and toughest ultra races there are out there.

Even though it means he suffers a lot in the aftermath of a big race and his body doesn’t thank him for it one bit, he still keeps coming back for more and is always looking forward to his next big adventure.

You either “get” ultras or you don’t. For Damian, it’s more of an adventure than it is a running race. The build up and planning and training are great. Then at the end, when the pain stops, it’s amazing. As for the bit in between – he’s not so sure.

At 75 miles in distance (120 km) the Thwarted Rebellion Winter event was the furthest Damian had ever gone, so in that sense, it was a step into the unknown.

Back in 2016 he successfully completed the 100k Ultra Trail Cape Town which incorporated the infamous Table Mountain, amongst other extremely high peaks.

Last year he took on the CCC race at the UTMB. That was 101 km in distance and included 6,100 metres of elevation. Again, Damian made it to end, finishing in 17 hours 53 minutes. He also ran the Ultra trail Snowdonia 50-mile race.

The Thwarted Rebellion would be a step further than all of those races though so Damian knew there was a good chance this one would take him to brink.

The route follows the first 75 miles of the Glyndŵr’s Way National Trail in Mid Wales and features a total ascent of 12,500 ft (3,810 m). It started at 7pm on a Friday night meaning at least one night out wandering in the Welsh wilderness was a guarantee.

With designs on competing in the full UTMB race next year, which is 100 miles, this would be a good tester for Damian to see how he coped, not only with the distance, but also going a night without any sleep.

For Damian, it turned out to be a true adventure in every sense of the word. It had a bit of everything really… Rolling farmland, angry night time guard dogs, vicious sheep, even angrier Welsh farmers, limited aid stations and extremely difficult navigation. And it was wet. Yes, there was plenty of that.

The route started in Knighton, just on the Welsh border, and finished in Machynlleth. It is thought to be one of the most beautiful yet demanding ultra courses in the UK.

It was a fairly low key event with only 48 hard core nutters setting off on a very wet and dark Welsh night. Some had visions of completing the full 135 miles of the Rebellion that would see them out for at least two full nights. Quite possibly three in fact.

Fortunately for Damian and his friend David Parker, who runs for Littledown Harriers, they were taking it gently with a mere 75 miles to get through. That was the “fun run” version, if you like. As for how much “fun” it was going to be remained to be seen.

As Damian, David and the other runners got going, they knew they had a long night ahead of them, followed by an equally long day afterwards.

After 4 hours and 47 minutes had elapsed, they arrived at the first checkpoint in Llanbadam Fynydd. They were now 23 miles into their journey and Damian was, at that time, in 7th position.

The Glyndŵr’s Way runs through lots of farmland and, although it’s a national trail, it’s quite underused. As the night progressed, it became apparent that nobody had thought to warn the farmers that the runners would be passing through.

That meant that in the middle of the night they were waking up every guard dog in mid-Wales. The dogs did not seem happy about it either. Consequently, after the lead guys had woken the dogs, the farmers staggered out of bed and went out to see what all the commotion was.

They then found Damian and David skulking around their yard and they took their annoyance out on the two of them, shouting and probably cursing at them in Welsh. Despite the fact that Damian and David were very polite, it wouldn’t have done much for Anglo-Welsh relations in those parts.

After all that Damian was probably hoping the rest of the night of the night would pass without incident. No such luck though. At about three in the morning they were jogging up a very narrow farm track. David was in front and Damian was following and they happened to be behind three sheep that were also heading down the same track.

When the sheep got to the end of the track though, they realised they couldn’t get out so instead, they decided to turn back and charge at David and Damian. In his head torch cocoon of light though, Damian was oblivious to what was going on.

In order to let the sheep go past, Damian jumped aside. He then turned and shouted to alert Damian. Damian stopped to give them room. The sheep that was in the middle of the three though obviously thought “sod this”, and came straight for Damian.

Jumping the full height, it landed all for hooves on his chest and kicked. Damian was knocked off his feet and landed in a deep muddy pool at the side of the track. He was then left lying there thinking “what the hell just happened?”

David couldn’t stop laughing. It was rather a big sheep and had done a proper job on Damian. Of all the things that he though might happen during this adventure, being attacked by a ninja sheep was not on the list.

They still had an ultra race to complete though so Damian picked himself up off the floor and soldiered on. At 6:37am, they arrived at the next checkpoint, which was in Llanidloes, 47 miles into the race. Having been running for 11 hours 24 minutes and 40 seconds, Damian was now in 5th position.

The dynamic duo were still going well and continued on their journey. For the next 15 miles or so they were okay. From around 62 miles onwards though, it started to get extremely tough. The next 17.5 miles were not pretty.

After a full night’s running, when the daylight set in the spectacular scenery was clear to see

It took Damian about six hours to hobble home from there and he found himself cursing every extra hill. It was a rather strange hobby, this ultra running malarkey.

At 4:28pm that afternoon, Damian arrived at the finish with David, battered and bruised, but not beaten. Finishing in a time of 21 hours 28 minutes and 27 seconds, Damian had come in in 8th place. It had been a hell of a journey, but he’d made it and was very pleased with the time, all things considered.

Out of the 35 runners who attempted the Thwarted Rebellion Winter race, 29 of them successfully completed the course, which is a pretty good ratio for such a long and tough race.

The winner of the Thwarted Rebellion was Frederick Levy of Fulham Running Club who got round in 18 hours 40 minutes. He was followed by Stephen Minnikin of Windsor, Slough, Eton & Hounslow who crossed the line in 18:46:40.

The Welsh countryside proved to be beautiful yet unforgiving surroundings

The full Rebellion was a completely different story though. Out of the 13 hardy runners who were looking to complete the 135 mile distance, only two actually managed to make it all the way to the end.

They were Mark Thompson of Trail Running Association who was 1st, finishing in 45 hours and 50 minutes. Then, taking 2nd place and 1st female, it was Lizzie Rosewell who arrived at the final destination of Welshpool in a time of 64 hours 21 minutes.

Everyone else had retired before reaching penultimate checkpoint of Llanwddyn which was 107 miles in. That gives a true reflection of just how difficult it is to get through the full distance. What probably spurred Mark and Lizzie on to get to the end was that they knew they’d be 1st male and 1st female if they carried on.

For Damian though, he’d successfully negotiated his way through 78.5 miles of a very wet and muddy Welsh countryside trail and that was plenty enough for him. He’d also wracked up an elevation gain of over 14,000ft whilst he was out there so it was a tremendous accomplishment to see the race out.

The courage, tenacity, dedication and doggedness required to make it all the way in a race like this cannot be underestimated, especially if it involves running through the night as well. Hats off the Damian for a well executed and disciplined display and for letting nothing get in the way of his quest to reach his final destination, including a vicious ninja sheep.

Covering 78.5 miles in the Thwarted Rebellion Winter race will give Damian confidence that he could potentially go the full distance at the UTMB