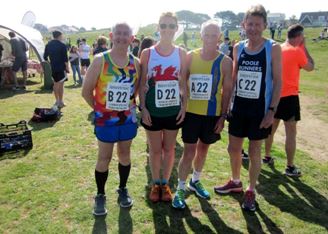 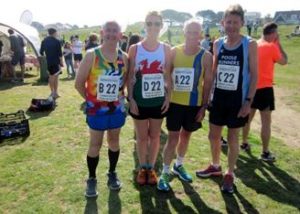 Travelling to Guernsey again this Easter to take part in the Easter Festival of Running, Bournemouth AC’s resident ‘Supervets’ Ian Graham and Dave Parsons readied themselves to tackle the annual challenge of four races in four days.

Dave was attending for the 21st consecutive year and for Ian it was his 12th out of the last 13 years. They were joined by Poole Runners’ own ‘Supervet’ Geoff Scott, who was amazingly present for the 25th occasion since his first trip in 1989.

Ian was defending his ‘supervet’ title from last year and although training had been going okay recently, he had quite a tough act to follow after his success in 2018. Dave was just hoping to get round in each race following a hamstring problem which had severely hindered his training.

The first race on Good Friday was the 5k road race which starts and finishes at the athletic stadium on Footes Lane and is mostly conducted on lovely quiet narrow country lanes, finishing on the track.

Ian ran strongly and was very pleased to finish in a time of 22:49 (just over a minute quicker than last year) for 109th place out of the 186 finishers. 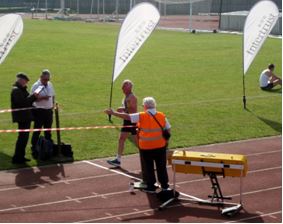 After a slightly conservative start, Dave found a good consistent pace to finish 147th in a time of 25:38 (a few seconds faster than in 2018). Geoff, who had recently been finishing outside 30 minutes in parkruns, was very pleased with his time of 28:37 which put him in 174th place. 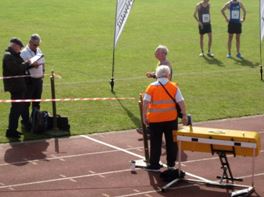 The second race on Saturday was the usual ‘Full Course’ cross country which is held on L’Ancresse Common and is a multi-terrain course of 4.75 miles. This event is held in memory of Keith Falla who was sadly killed when hit by a vehicle  whilst he was on a training run. In addition to being a talented Guernsey athlete, Keith was also at one time a member of BAC.

Although it was quite windy, the conditions were otherwise excellent. 119 athletes completed the course and Ian ran another strong race to finish 72nd in a time of 37:29. Again, he was just over a minute quicker than 2018. 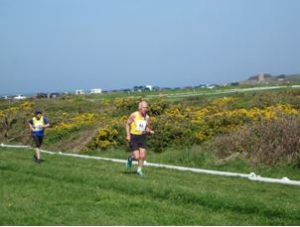 Ian approaches the finish of the ‘Full Course’ cross country

Dave found the conditions to his liking and he managed to establish a pace to suit his fitness and was very happy to finish 100th in 43:39, which was over two minutes quicker than 2018! Geoff also enjoyed the race and was pleased with his time of 47:16 which put him in 109th place.

In the ‘Supervet’ category, Ian was 3rd (77.32%), Dave was 7th (64.91%) and Geoff was 8th (63.01%). It was fairly clear now that there were a couple of runners in this category who, as long as they stayed upright for the final scoring race, were going to be just a little too good for Ian to catch and overtake.  At least that meant that for him, the pressure was off. 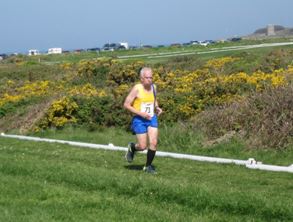 Dave had felt a severe twinge in his left calf just before the end of the race so had some massage treatment in the hope that it would last out the final two events.

And so to Easter Sunday and the ‘Stonecrusher’ cross country relay, an event which no longer counts towards the overall individual results but is a 4 x 1-mile relay over a twisty, rabbit-hole strewn, and rather hilly course.  It is great for spectators but quite challenging for the more senior runners competing against, in most cases, much younger and more agile competitors.

The intrepid Dorset trio were joined by a Guernsey based athlete in the shape of Welsh-born Lisa Evans, who had finished just behind Dave in the first two races. The team name chosen was ‘The Peninsulists’ – a reference to the Peninsula Hotel where Dave and Ian have stayed for many years. Ian took first leg and his time of 7:22 put them into 31st place. 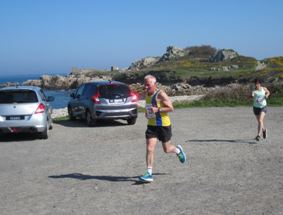 Dave took over but unfortunately, after just under half a mile, his calf ‘went’ and he had to slow down in an attempt to avoid too much further damage. He managed to finish in 8:31 but the team had dropped to 34th. 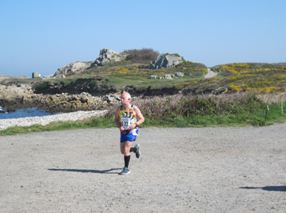 Geoff took over and his leg of 8:57 lost them just one place, putting the Peninsulists into 35th. Lisa ran very well on the final leg and overtook a number of her rivals. However, she was also overtaken by a few and her excellent time of 8:14 brought them home in equal 36th place in an overall time of 33:04. 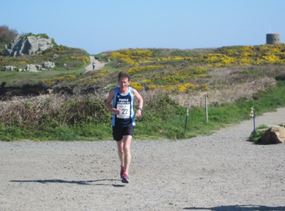 Geoff Scott makes his way round on the third leg

Despite further treatment on his injured calf, it became clear to Dave that his competition for the weekend was over and his role on the final day would be that of a ‘supporter’. 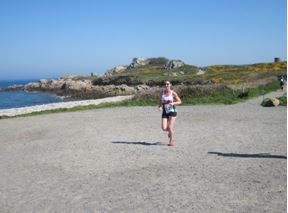 Guernsey-based runner Lisa Evans brings it home for the Peninsulists

Easter Monday dawned and another fine day was on the cards going into the final event – the 10k road race. 165 runners completed the point-to-point course with the individual honours and the overall festival victory deservedly going to Jacob O’Hara from City of Portsmouth AC.

Ian found himself in a small group of runners and was content to stick with them, eventually finishing in 101st place in a very creditable time of 49:33. 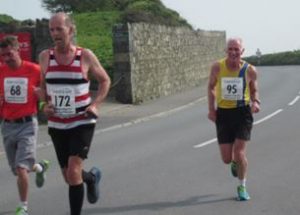 Geoff, although perhaps a little disappointed to just miss out on a sub-60, was far quicker than his last 10k in Guernsey and finished 150th in 60:44. 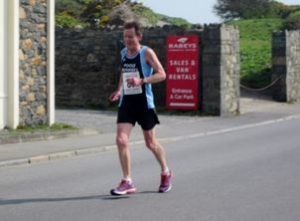 In the overall ‘Supervet’ category Ian came 3rd and Geoff 6th. They should both be proud of their achievements and it is hard to overestimate how tough it is to run four hard races in four days. They, and Dave, are already looking forward to 2020 when, if Geoff can finish all four races, he will have completed 100 Guernsey Easter Races. 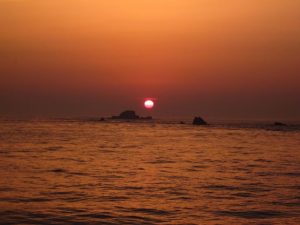 The sun sets on another wonderful Easter weekend for Dave and Ian in Guernsey. Here’s to 2020!