Disco and Craig find their top gear at Chichester 10k 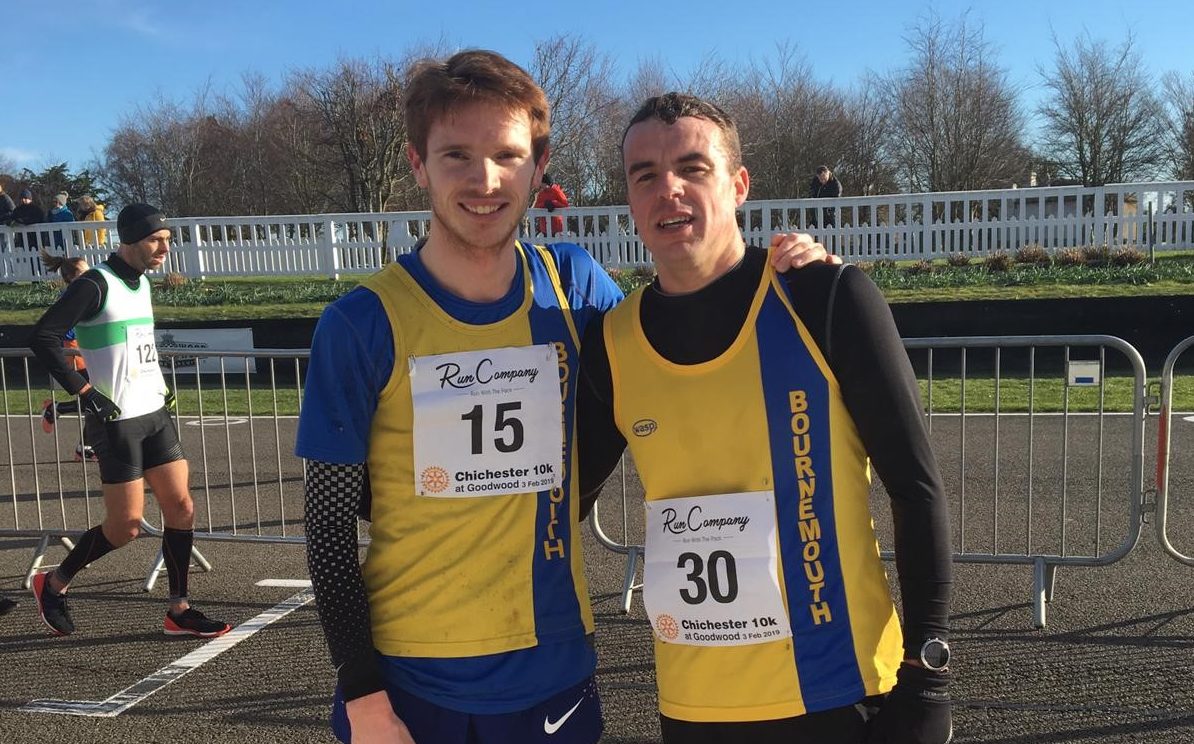 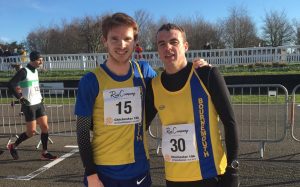 Two of Bournemouth AC’s top speedsters Dave Long and Craig Palmer were brimming with optimism as they set off for the Chichester 10k at Goodwood and with the form the pacey pair have been displaying recently they had every right to be.

Dave has produced some breakthrough performances of late, smashing the Supersonic 10k course record at the Bournemouth Marathon Festival, where he registered an incredible time of 30:42. Then a couple of weeks later he recorded a stunning sub-50 at the Great South Run.

Craig crowned his year with a sneaky sub-2:30 run at the Valencia Marathon in December that sent shockwaves through the Dorset running community.

That kind of magic doesn’t just happen by itself though. It’s a product of, not only raw talent, but hard work and endeavour as well. Dave and Craig have been training together a lot recently at the Disco Track Club Elite and their heartrate focused sessions have been carefully designed to steer that improvement curve to a higher plane.

Could they mix it with big guns at the Chichester 10k though, where the standard was expected to be astronomical? That was the big question.

The Chichester 10k is promoted by the Rotary Club of Chichester Priory and is staged on public roads for the first 6 kilometres before finishing with a lap of the Goodwood Motor Circuit.

The course starts at the entrance of the motor circuit in Claypit Lane, passing the Rolls Royce factory before heading along the historic Roman road of Stane Street. It then passes through Strettington and back along New Road before entering the motor circuit for a complete lap and finishing in the pit lanes.

Although it may have finished in the pits, Dave and Craig certainly weren’t stopping off to refuel or change trainers at any point. They blasted off at a frightening speed and from that point on, the challenge was to try and maintain that pace for the rest of the run. 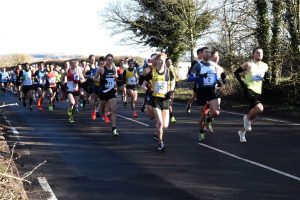 The 2019 edition of the Chichester 10k gets underway, with Disco and Craig in amongst the front runners

To begin with, Craig was going at roughly 5 minute mile pace. Disco was significantly under that, going through the first mile in 4:42 and the second in 4:48. He was looking to keep on terms with the lead group as they hurtled round.

After another quick mile at 4:51, Dave arrived at the 5k point in an astonishing time of 14:51, which was technically a 5k PB for him. He knew then that if he could dig in and keep going, he could be onto something really special.

Reaching the half way point in another remarkable time of 15:21, Craig also recorded his fastest ever 5k. He wasn’t stopping to think about that though. He was eager to press on and push even harder in the second half of the race.

For the next mile, Disco registered another fast one at 4:50. It was around the 8 or 9 kilometre mark that he lost focus a bit and began to drift off the back of the lead group. Dave is his own harshest critic though and felt he should have tried to grit his teeth and dig in a bit more at that point.

Finding some resolve over the last kilometre, Dave laid it down as hard as he possibly could, gunning for that super sub-30. As he reached the line though, the clock had just ticked over and he ended up finishing in 30:01.

He didn’t mind though really as it was still a huge PB for him and was a 41 second improvement on his Bournemouth Marathon Festival time. It was another magnificent breakthrough performance from Disco, giving him 8th place in what was an extremely high calibre field.

The race winner, William Mycroft of Enfield & Haringey AC crossed the line at 29:32 so Dave was less than half a minute behind that extremely impressive winning time.

As for Craig, he actually managed to pick up the pace after the first 5k, going through the following two miles at 5 minute mile pace. He then demonstrated amazing strength to record his fastest mile, registering a 4:54 for the sixth and final mile.

It turned out he’d actually run a superb negative split as he went over the line in a tremendous time of 31:19, which put him in 17th position. It was also a PB of exactly 1 minute for Craig, although he does admit that his previous best time at the Leeds Abbey Dash in 2017 was the day after he’d done a tough cross country and drank five pints of Guinness after.

It was a really pleasing time for Craig though and he could certainly be really proud of his efforts, especially since he only really did the race as part of a bet with Tag that he could get a sub-32.

That’s something Tag has been trying to do for quite some time now. They all went to the pub together the day after though to celebrate so no doubt Tag bought Craig a few beers then to satisfy the bet.

In total there were 1,472 finishers at the Chichester 10k, which underlines how well Disco and Craig did to place as high up in the standings as they did.

It wasn’t really even a big target race for Dave and he didn’t fully taper for it. He has his sights set on the Reading Half Marathon in March.

Since he doesn’t go up to half marathon distance very often in races, it will be interesting to see what kind of time he can do when he goes all out. He’s hoping for a sub-66 effort but most importantly, he’ll be looking to race at the front of the pack and be up their vying for the top positions.

Craig will be in action at the Lytchett 10 this weekend, where he will be using it as a marathon pace training run. That should still see him over the line in 56 minutes or so though. Then a couple of weeks after that it’ll be the next Dorset Road Race League fixture, the Bournemouth 10, where he will look to go quicker. 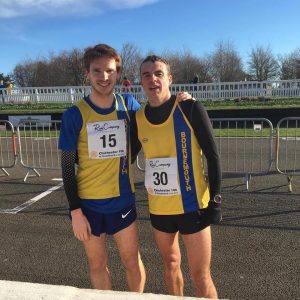 The race was a huge success for Dave and Craig and with both of them recording terrific new 10k PBs, they went home elated with what they had achieved