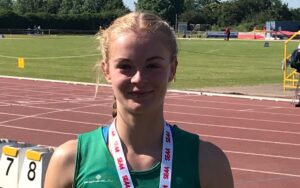 Currently making a real name for herself on the track in recent races, Bournemouth AC‘s very own Amelia Verney has been excelling over 100 metre and 200 metre distances.

Recording an 11.82 for the 100m and 24.97 for the 200m at a South of England Track & Field Academy Sports Pro Event in May, Amelia had every reason to be confident going into the South of England Athletic Association Championships.

Competing in the Under 20 category, Amelia did not disappoint, running a time of 24:42 in her 200m to heat to qualify for the final in 2nd place. Then, in the final, she improved on that performance to cross the line in a magnificent time of 24:07. That was enough to see her secure a silver medal. 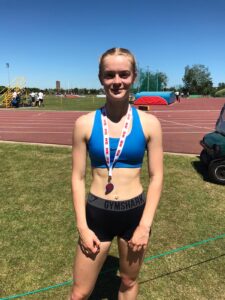 Demonstrating that she can mix it with the best of them, Amelia came away with medals to show for it

The next day she followed up those heroics with a lightening quick 11.99 in her heat to qualify for the 100m final in 2nd place. Then in the final she clocked a time of 12:09 to seal a bronze medal.

The 11.99 time she ran was legitimate as well, with no wind assistance, and it was only Allanah Fashanu of Shaftesbury Barnet Harriers who managed a faster time that day. She recorded an 11.93 in that same heat.

Breaking 12 seconds is a remarkable achievement for Amelia. She will now be seeking an England vest, which is a real possibility for her given the huge potential she is showing. 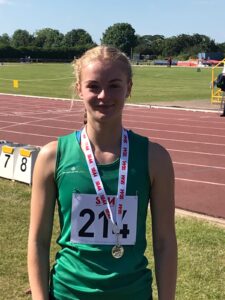 With the talent she possesses, an England call-up could well be in the pipeline for Amelia

Next up Amelia will be returning to Bedford to compete in the England U20 Championships this coming weekend and she’s also been invited to the British Championships in Manchester the following weekend.

It’s certainly going to be interesting to see how Amelia gets on when facing off against the very best in the country. The way she’s running at the moment though, another impressive display will likely be on the cards.