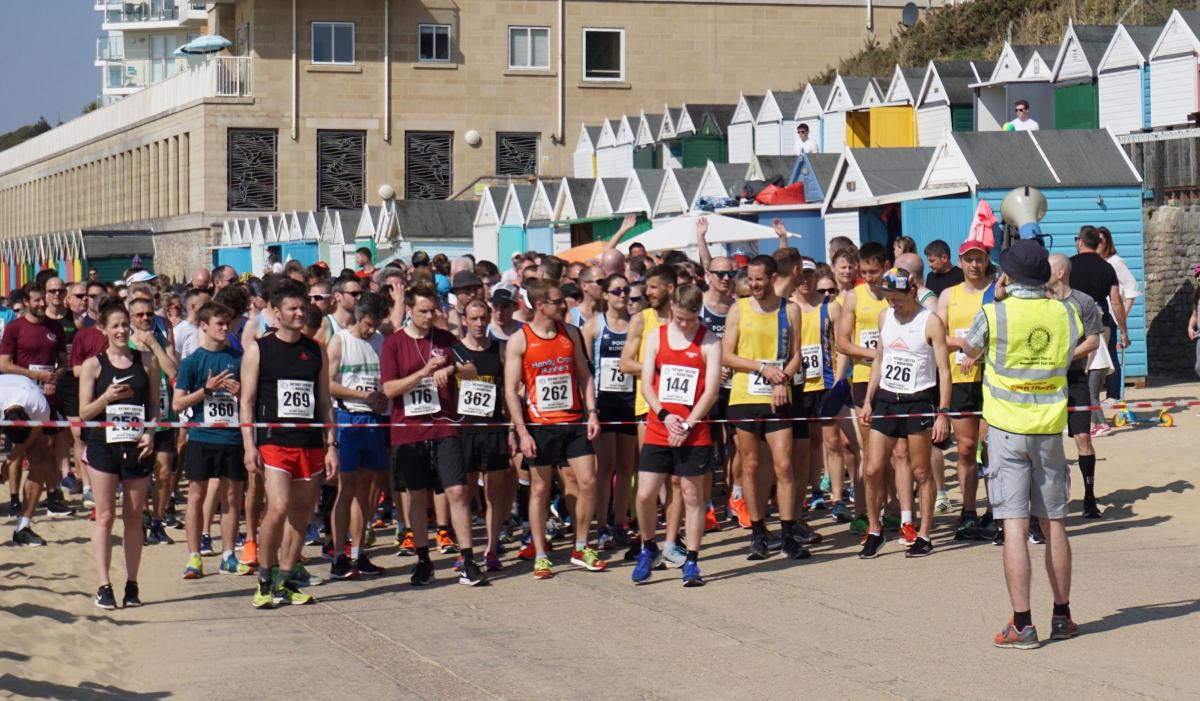 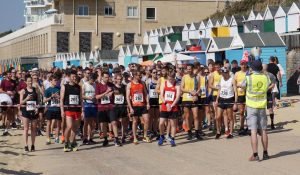 In the midst of a spectacular and sun-kissed Easter Bank Holiday weekend that had people flocking from far and wide down to Bournemouth, the Rotary East Cliff Easter Quarter Marathon provided another reason to get down to the south coast.

Although it wasn’t a Dorset Road Race League race this year so the numbers were slightly down on what they were in 2018, the race still attracted some of the county’s big names and boasted a highly competitive field that would provide plenty of intrigue.

Amongst the main contenders were some of Bournemouth AC’s finest in Jacek Cieluszecki, Steve Way and Anthony Clark. They were all competing as part of a longer training run, with other more important race goals to consider further down the line. 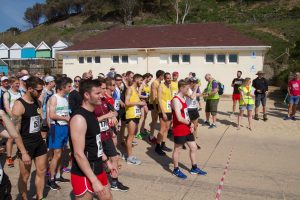 Other BAC members taking part included Stu Nicholas, Alex Goulding, Stu Glenister and Julia Austin. There was also another familiar face in the starting line up in the shape of Graham Robinson, a man who has represented Bournemouth AC on many occasions in the past.

Of course, there were other strong contenders taking to the start line as well including Gavin Pritchard of Lonely Goat RC and Bill Day of Poole Runners. 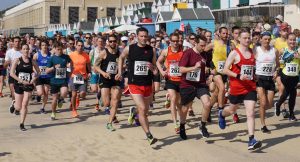 JC, Steve and Ant were all planning to run at least 20 miles that morning so they weren’t expecting to go as quickly as they would in a target race. The likelihood was though that with the ability they have, they would still be up there vying for the top positions.

In fact, they had all run 8 miles before the Easter Quarter Marathon got underway. Even so though, the pace they started off at was too quick for the majority of the competitors. They were running at around 5:40 pace for the first few miles.

And their off!! The runners and riders are out of the traps and on their way along the promenade

Ant and Steve were planning on hitting marathon pace for the race effort. Steve wasn’t feeling too great though and had to drop the pace down after the first couple miles to ensure he would be able to complete the rest of his long run.

Ant managed to persevere and continue at exactly the pace he was supposed to be running at. On the fourth mile though, JC moved into another gear and took the race by the scruff of the neck. 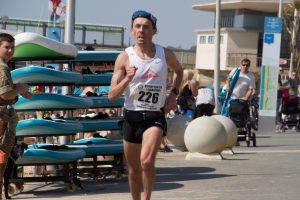 A blistering 5:24 mile saw him open up a gap over Ant who was in second and from that point on the result was a formality. A strong last couple of miles at 5:35 and 5:33 pace saw Jacek arrive at the finish line to take a convincing win in a time of 36:33.

He then went on to run another 8 miles giving him a total of just over 22.5 miles for the day. Next up for Jacek it was off to Miami for the Wings for Life World Run, where he would look to win his location race for the third consecutive year. 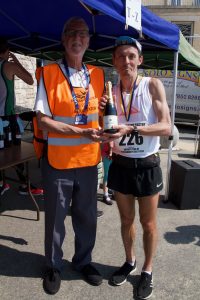 JC receives his bottle of champagne after an impressive win

Reaching the line in a good solid second place, Ant completed the course in a time of 37:11, so again, a very strong and very disciplined run from him. He subsequently completed the remaining 6 miles of his planned training run.

Third place went to Graham Robinson who had an excellent run to cross the line in 37:36. Graham has been suffering from a dodgy calf since before Christmas but on this occasion it felt fine and he was able to get a good run out. 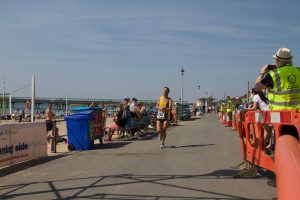 Anthony Clark comes in to take a superb second place

Gavin Pritchard of Lonely Goat was the only other man to get inside 38 minutes. He finished in 37:56 to take fourth place. Having not quite had the race that he was hoping for, Steve arrived at the line in fifth place, registering a time of 38:32.

He was disappointed that he’d failed to match the average pace he’d managed in the Manchester Marathon a couple of weeks prior. Steve has been finding his body to be rather unpredictable these days though and he never quite knows what he’s going to get. He did go on to complete the rest of his 20 mile run afterwards though.

Sixth place went to Bill Day of Poole Runners who crossed the line in 39:03, before Alex Goulding arrived at the finish to take seventh place in a time of 39:35.

When Alex entered the race he never dreamt he’d have to be contending with such intense heat in April! His only real concern before realising it was going to be so hot was having to run over all the sand that seems to have taken up permanent residence along the prom.

As the race started Alex watched the front runners zoom off as he made a concerted effort to not get carried away trying to keep up with them. His plans for a negative split went out the window though when the fatigue set in from the heat.

With the race being an 11am start on such a glorious Saturday, the prom was really busy which made it more of a challenge to navigate through all the walkers, dogs and cyclists, as well as the council van that for a short time blocked the path.

At the halfway stage Alex was still feeling strong having been encouraged by moving up a couple of places. As he began the ascent along the cliff top he struggled to maintain a decent pace though as the heat began to take its toll.

Using all his mental energy to keep focused on the race and not to keep thinking of excuses to give if he dropped out, he was disappointed to look at his Garmin and just see his pace dropping as the race went on.

The last couple of miles were pure drudgery for him and he found it to be one of the most mentally tough races he’d ever done. That confirmed for him that more work is needed in order to get back to his previous form.

In the latter stages it also felt a bit solitary for Alex as the front runners were way in the distance and he could only see glimpses of the runners behind him. It was a huge relief for him to get to the finish though and receive his chocolate Easter egg.

It had only been a week since Stu Nicholas had run a splendid new PB of 2:43:10 at Brighton but he couldn’t resist the lure of a chocolate Easter egg.

Struggling out there in the heat though and with the marathon effort still in his legs, as well as the 17 minute parkrun he did that very same morning before the race, Stu didn’t have the best of runs. He still managed a top ten finish though, crossing the line in a time of 40:43.

Taking 22nd place in the overall standings, Stu Glenister was revelling in a cracking little battle that he was having with Joe Godden and Neil Sexton of Poole Runners.

The Poole Runners pair just managed to get the better of Stu in the end but he was pleased to complete the course in a stellar time of 43:41. Next up for Stu he was off to Shropshire for back-to-back half marathons.

Putting together a decent performance to take 55th place overall, Julia Austin won the Female 50+ category posting a time of 49:27. That made her 6th woman over the line. 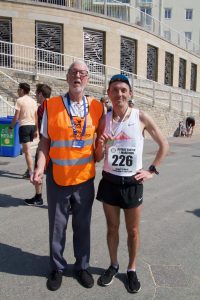