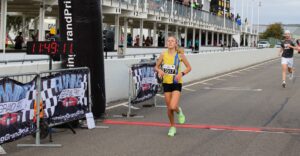 There can be few better places to race than Goodwood Motor Circuit if you have a need for speed and the Running Grand Prix organised by RunThrough presented athletes with a great opportunity to do just that.

And with the course being on a race track it meant a smoot, tarmac surface was guaranteed and since it didn’t clash with any motor races, it would also a traffic free environment on this occasion.

Interestingly, Goodwood Motor Circuit is the only classic track in  the world to remain entirely in its original form and that dates back to September 1948, when it was first open to the public. It played host to Britain’s first post-war motor race meeting and then became the permanent venue.

Each lap of the course is around 5k which makes it ideal for staging a running event and the RunThrough Running Grand Prix featured five different distance races. A 5k, a 10k, a Half Marathon, a 20 Mile and Marathon.

That was enough to wet the appetite of one of Bournemouth AC‘s brightest young prospects, Erin Wells. She was lining up on the grid for the 5k race where she was hoping to put the pedal to the metal in a big way.

It wasn’t going to be easy though as at just 13 years of age she was up against mostly older and more experienced athletes than her. But she has raw talent and a maturity that allows her to be competitive at a higher level.

Her impressive cross country displays last season demonstrated the huge pedigree she has. That included a 2nd place finish in the Wessex League standings and 6th in the Hampshire League aggregate for the Under 13 Girls.

On top of that she also recorded a 27th place finish in the National Cross Country Championships in  Nottingham and 30th in the Southern Championships at Parliament Hill.

The line up for the Half Marathon race included Kirsty O’Callaghan, who has recently been training with the Bournemouth AC group on Tuesday nights.

The previous weekend both Erin and Kirsty had been in action at the New Forest Marathon event, where again, Kirsty took part in the Half Marathon and Erin ran the 5k.

That involved a much tougher off-road course though with its fair share of ups and downs. In comparison to that, the Running Grand Prix, on paper at least, looked like it should be smooth sailing.

There was only one element that could prevent the runners from hitting their top speed at Goodwood and that was the wind. With it being a racing track, it was a very open area which left it exposed if it so happened to be a windy day. And sure enough, it was. 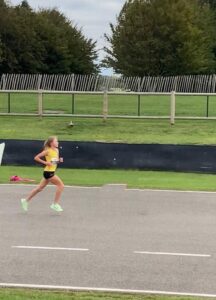 That made it much tougher than it otherwise would have been. In the 5k race, Erin performed extremely well though, despite the adverse conditions, and finished as 4th placed female out of 23 and 20th overall out of 120 runners.

Registering a time of 18 minutes and 47 seconds, she’d gone over a minute quicker than she did at the New Forest Marathon and that was despite the ferocious winds she had to contend with. 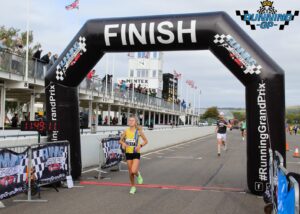 Erin thoroughly enjoyed the event though and said she would love to try the race again but without the gale force conditions! 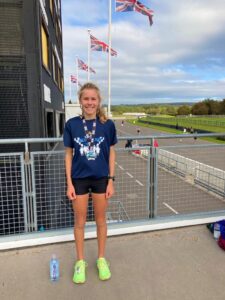 In spite of the blustery conditions, Erin enjoyed the race

Completing the Half Marathon course in 1 hour 35 minutes and 23 seconds, Kirsty finished as 6th female out of 52 and 48th overall out of 174 runners.

That was almost 20 minutes quicker than she’d run at the New Forest Marathon the previous weekend so it was a pleasing result for Kirsty. 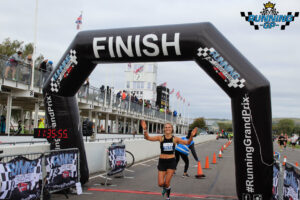 Once again, it was good to see another successful running event taking place though and again proving that, if organised well, there is no reason why races can’t continue to prosper in these unprecedented times we are now living in. 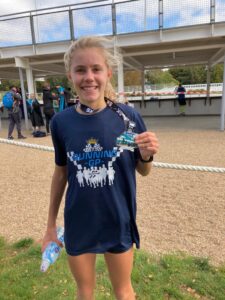