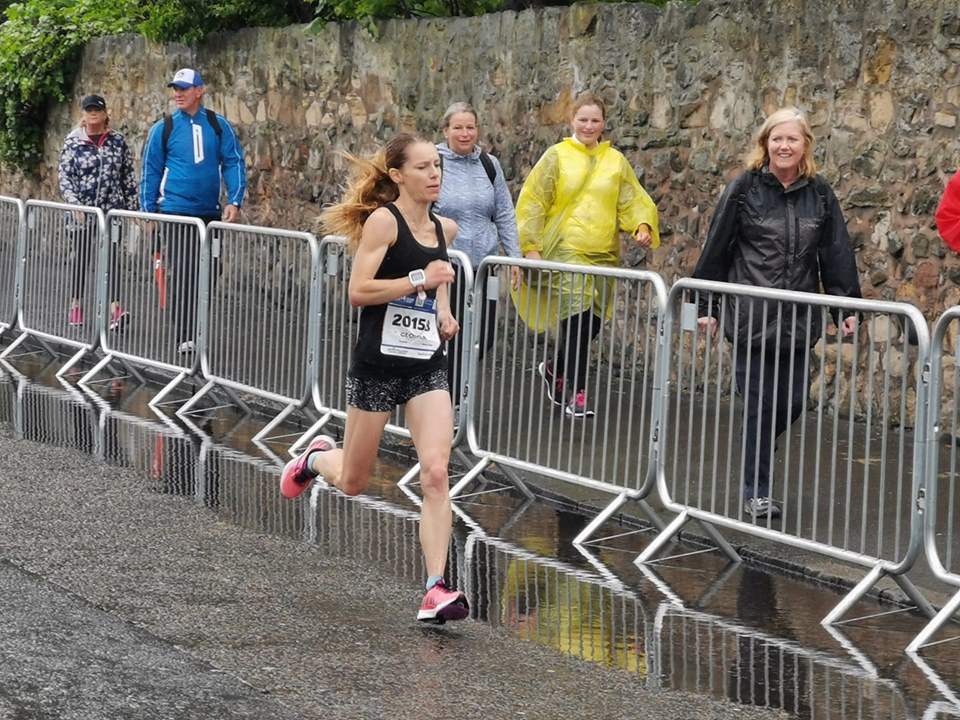 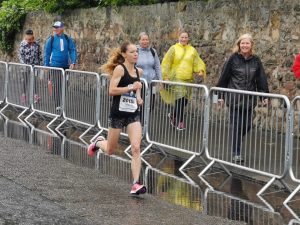 It would probably be fair to say that the conditions weren’t exactly awe inspiring when Georgia Wood arrived north of the border for the Edinburgh Half Marathon but she wasn’t about to let that stand in her way.

Georgia trains for events like a proper athlete and does benefit from having a fiancé in Tom Craggs who is an England Athletics coach. At the end of the day though, she still has to go out and do the training herself and work hard to get herself into the best possible shape she can for her target races.

With her mothering duties to baby Chloe keeping her occupied for much of the time though, it’s always a tricky juggling act for Georgia. In fact it’s difficult for both her and Tom as they both want to devote time to running as well as running their businesses and whatever else they’ve got going on at the time.

Georgia quite often tends to get bad luck as well in the lead up to races. For instance, Chloe seems to get ill quite often at that time, which consequently has effect on Georgia. Even if she doesn’t catch the bug, there’s still the knock-on effect of the sleepless nights that she has to cope with.

She was also experiencing a problem with her eye as race day drew ever closer and that had caused her vision to be impaired on occasions when she went over to the track for a training session. She sometimes gets a sty forming which can in turn cause her eye to become swollen.

Nevertheless though, Georgia is pretty good at coping with whatever comes her way and she took it all in her stride. When she arrived at the Edinburgh Marathon Festival, she was focused and ready for action.

The Edinburgh Half Marathon has been touted to be one of the fastest courses in the UK so she did at least have that on her side. The route starts off on a downhill curve, then flattens out for the rest of the race, meaning little or no inclines to contend with.

Making a very fast start, it was clear from an early stage what Georgia’s intentions were. Hitting the 10k point in a super-quick time of 37:34, if she was able to sustain that pace, she was on for an epic time.

As she reached the 11 mile point, she began to think that a sub-1:20 time might be possible. If she could push hard over those last couple of miles, it was within her grasp.

Then she turned round the corner and was greeted by a massive headwind. It was gutting as just as she’d got her hopes up that she was going to produce something extra special, they then got dashed.

She did her best to push on through it but inevitably did lose some time in the end. Crossing the line in a still very impressive time of 1:20:46, Georgia was 4th placed female on the day and 1st in the Over 35 category.

What’s more, she’d come in 80th out of the entire field, which consisted of 10,965, or at least that’s how many finished the race. It was an extremely impressive result for Georgia.

It was also a Bournemouth AC club record as well, meaning no female BAC athlete has ever run a faster half marathon. That’s quite an achievement really when you think that Bournemouth AC has always been quite an elite club in terms of the standard of its members.

The previous best half marathon time recorded before that was clocked by Charlotte Penfold at the Waford Half Marathon back in 2010. She ran it in 1:21:13 and must have thought at the time that there was in danger of that being beaten in the near future.

Amazingly though, despite all that, Georgia still wasn’t happy with the run. She had been targeting a sub-1:20 time and was disappointed not to get it. Of course, had the headwind not have been so prevalent in that last couple of miles she may well have got there.

That does of course happen in running sometimes. You don’t always get the conditions you would choose. That’s partly what makes it so challenging. You have to take whatever comes  your way and do the best you can.

Ultimately though, it was still a tremendous run for Georgia though and no doubt she’ll look back on it with a lot of pride once the dust settles. There will be other opportunities in the future for her to seek that illusive sub-1:20.

As a reward for her amazing run, Georgia claimed a place on the list of all-time Bournemouth AC bests, with a new club record for a female in a half marathon