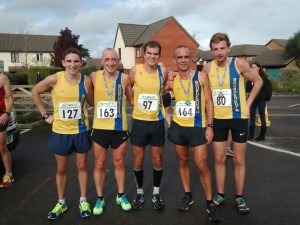 Success at the penultimate Dorset Road Race League event, a solid performance in the North of England, and two unexpected BAC Parkrunners feature this week. 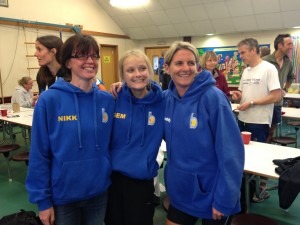 The Gillingham Trotters ‘Gilly Hilly’ 7.5 mile road race, which stepped in as a DRRL race following the cancellation due to weather conditions of the March Hare 20 earlier in the year, took place in Gillingham on Sunday 2 November, and it was good to see strong BAC Mens’ and Ladies’ teams in action, despite the fact that both have already won year’s League. For the men, Jon Sharkey, Simon Munro and Graeme Miller secured the Open team prize, with finishing positions of second, third and fourth respectively. Paul Hill, in seventh place and Simon Way, tenth, sealed the League win for BAC.  Nikki Sandell was BAC‘s first lady across the line, with Gemma Bragg and Caroline Rowley completing both the Open and League team.  The Open team competition places were calculated by an aggregate time, which resulted in BAC‘s ladies just being pipped in to second place by Poole A C with a margin of 1 minute, 40 seconds, very close considering the winning aggregate time was 2 hours, 40 minutes, 7 seconds!  However, the League positions are calculated by finishing positions, and by this measure BAC came just in front of Poole A C’s ladies, so, once again, BAC‘s ladies team, promoted only this year from Division 2 of the League, have won an individual League race, cementing their position at the top of Division 1.  The final League race is the Wimborne 10 on 16 November (entries now closed), and the entry list shows a strong BAC contingent (which may have something to do with the battle for individual League positions!), so it could be a dramatic finish to a successful League year. 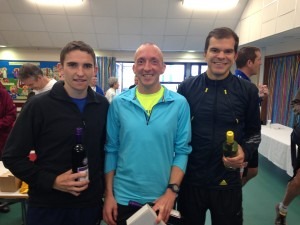 Meanwhile, in Lancaster, Chris O’Brien ran the Lancaster Half Marathon in 89.27, finishing 39th of a total of 604.  This appears to be a HM PB for Chris, who hopefully is satisfied, particularly with just managing to break the 90 minute barrier.

The day before saw two BAC athletes unexpectedly competing in the Parkruns.  In Kings Park, Bournemouth on Saturday 1 November, Alison Humphrey (known to many as Ali Barnes) appeared on the start line.  It was good to see Alison again after so long, and clearly Alison is keeping herself in shape, alongside looking after her family, as her time was 21.19.  Paul Hill was yet again second in the race – this seems to be Paul‘s fate!  Other BAC competitors (amongst a total of 273, so the Bournemouth Parkrun continues to grow) were Ian White, Jud Kirk, Jim Dence (running a PB and first in his age category JM11-14), Joe Price, Ian Graham (first in his age category VM65-69, but definitely not a PB!) and Will Price.  The other BAC athlete unexpectedly turning up was Tony Chutter, who was tenth (of 157) at the Weymouth Parkrun in 20.18, so Tony clearly isn’t in bad shape after injury and a lengthy trip abroad.  Let’s hope we see Tony competing in a BAC vest soon!  Meanwhile, in Poole Park, Simon Munro was preparing for his splendid Gilly Hilly the next day by finishing 4th of a total of 576 in the Poole Parkrun.

BAC athletes receive their Gilly Hilly prizes from the Mayor………… 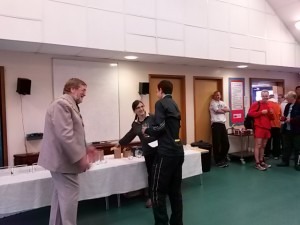 Jon Sharkey (also in photo in Ines Braun, Gillingham Trotters, who contributes so much to local athletics) 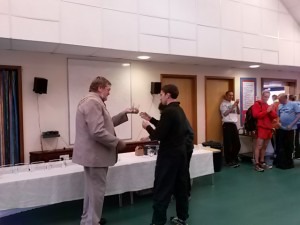 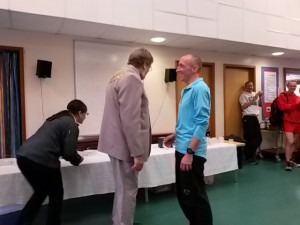 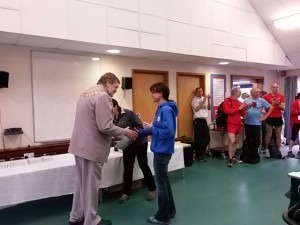