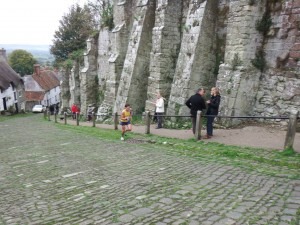 Simon Munro has everything under control on Gold Hill

The weekend 10/11/12 October was a busy one for BAC athletes, especially for Simon Munro, Paul Hill, Nikki Sandell and Jez and Gemma Bragg. Simon, having had an exceptional run to finish 28th in the first Hampshire Cross Country League at Farley Mount on the Saturday, proceeded to win the Gold Hill 10k the next day. Even more astonishing were the activities of Paul Hill who, one week after a running a marathon debut of 3.11, competed in the Boscombe Pier 5k on Friday, Bournemouth Parkrun and Hampshire League on Saturday, finishing with a 5th position in the Gold Hill 10k on Sunday. Nikki, Jez and Gemma both ran in the Cross Country and Gold Hill 10k, Nikki and Gemma ensuring a BAC senior ladies’ cross country team for the first time for many, many years, and a Road Race League and open win at Gold Hill, and Jez, with his 4th position at Gold Hill, ensuring similar wins for the BAC men. There were other notable performances by Jacek Cieluszecki, 9th at Farley Mount,  Steve Way, 7th in the Great Eastern Half Marathon, and Bridget Dence, 2nd in her age category at Farley Mount.  (See separate report for details of the Hampshire Cross Country League.) 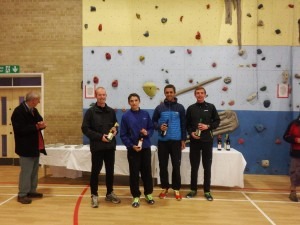 The Gold Hill 10k on Sunday 12 October, organised by Gillingham Trotters, has been extended in the last year or so, so the distance is a full 10k, which has added another steep hill towards the end, making this course, including the ascent of Gold Hill itself, challenging to say the least.  It is remarkable, therefore, that so many BAC athletes, men and ladies, ran so well having competed in an equally challenging cross country race the day before.  Simon Munro, Jez Bragg and Paul Hill had all so competed, so congratulations to Simon on his win in 37.03, Jez on his 4th place in 39.45 and Paul, 5th in 40.25.  Of a total field of 212, Mike Cowham, 52nd in 47.16, completed the winning open team, and Steve Cox, 57th in 48.32, ensured a second place in the Dorset Road Race League, helping secure BAC‘s Mens’ Team’s win for 2014.  Ian Graham, trailing some way behind (and very happy not to be scoring in any team!), was the final BAC man to cross the line, 56th in 55.27.  Turning to the ladies, Nikki Sandell and Gemma Bragg both ran very well, even putting aside that they too had run in the cross country race the previous day, with Nikki finishing as the 2nd lady (1st FV), 29th overall in 44.39, and Gemma 4th lady in 45.03.  Nikki and Gemma received strong support from Caroline Rowley, 63rd in 49.34 (completing the winning Road Race League team), and, ensuring a 1st Ladies’ Team victory for BAC, and Cherry Sheffrin, 65th in 50 minutes exactly, the fourth member of the winning ladies’ team in the open competition.  A successful day for BAC, especially considering everything else happening during the weekend! 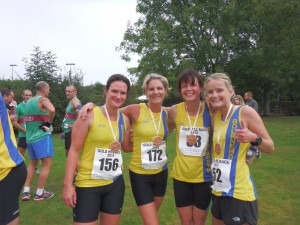 See below for more photos of Gold Hill 10k

The same day, Steve Way was running in the Great Eastern Half Marathon, in Peterborough, one of a series of half marathons in which Steve is competing in preparation for the 100k World Championships next month.  Of 1500 finishers, Steve was 7th in a time of 68.27, and was 1st Vet. 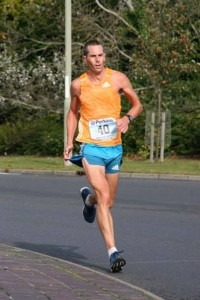 Steve Way competes in the Great Eastern Half Marathon, Peterborough

The following morning, Paul Hill was again running in the Bournemouth Parkrun, which was won by Billy McGreevy, with Paul 6th of a total of 228.  Also competing were Jud Kirk, 12th, and Will Price, 143rd.  At the rear of the field Nikki Sandell was on duty as the tail runner.  Meanwhile, Simon Way was 2nd (of 519) in the Poole Parkrun. 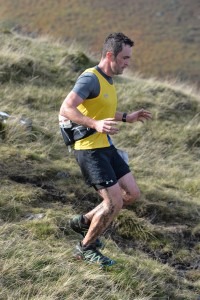 Also on Saturday 12 October, Bournemouth AC could be spotted in the list of entries in the Langdale Horseshoe Fell Race in the Lake District, alongside the name of Damian Boyle.  The race has a distance of 21.1k with 1450m ascent.  At the time of writing, the results aren’t available, but Damian reports that there were many injuries, with two people having to be helicoptered off the mountains, but that he himself did OK “through training on the zigzags” and survived to finish in 3.11, about half-way down the field.  Sounds like quite an achievement! 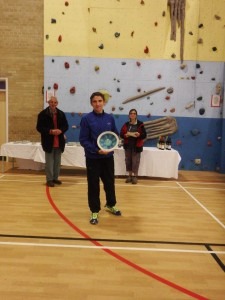 Simon Munro with the winner’s trophy 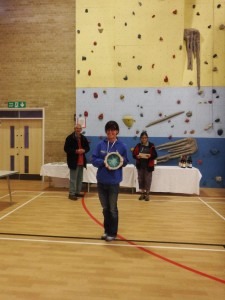 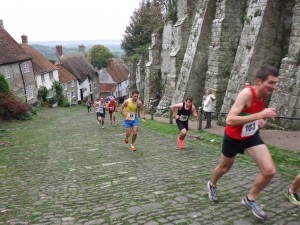 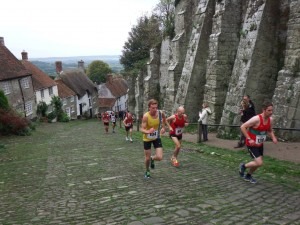 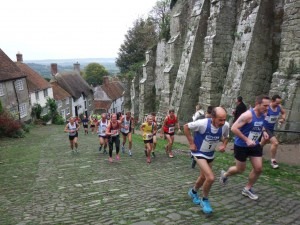 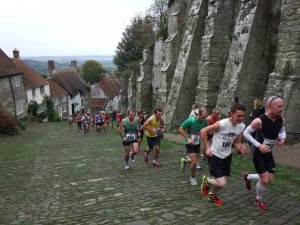 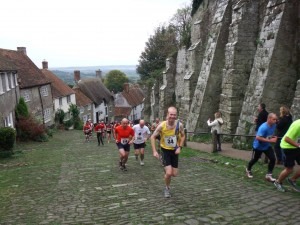 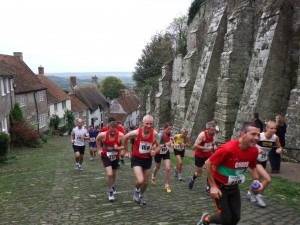 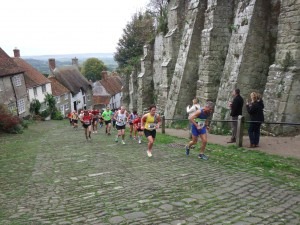 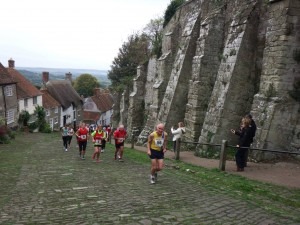 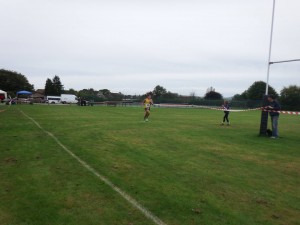 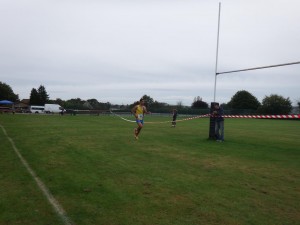 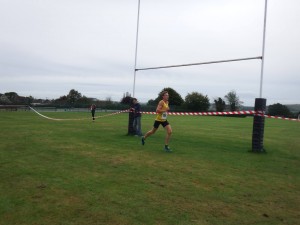 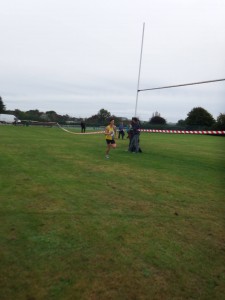 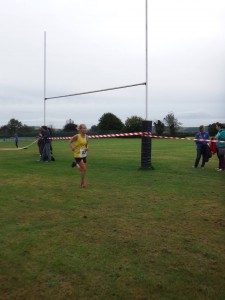 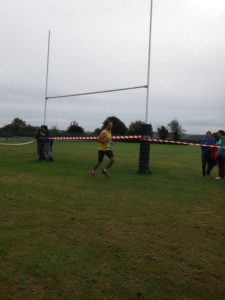 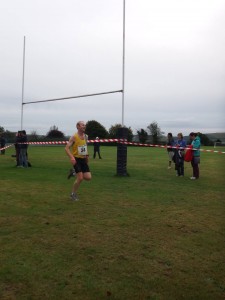 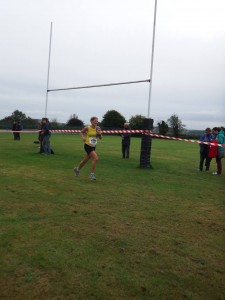 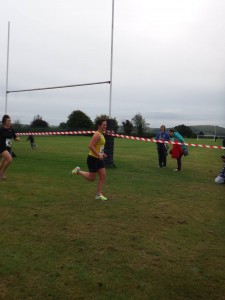 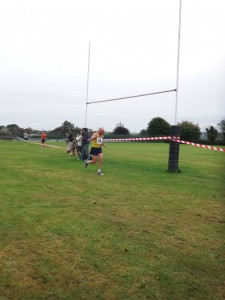