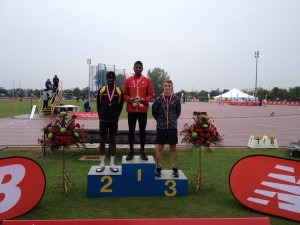 Patrick Sylla has won every top National Long Jump championship in his age category – U17, and his latest win at the Sainsbury’s School Games 3 – 6 September in Manchester confirms his status as number one.  Patrick won his Gold Medal in Manchester with a leap of 6.75, on his second jump of the competition, which was one week after winning Gold at the England Athletics U17 Championships at Bedford on 30 August.  Just what an achievement this is cannot be overstated.  The Sainsbury’s School Games is a massive event, over four days, attracting the top youngsters from all over the country, competing, not only in athletics, but also in cycling, fencing, gymnastics, hockey, judo, rugby 7s, swimming, table tennis, volleyball, wheelchair basket ball and wheelchair tennis.  Although the Championships at Bedford are ‘England Athletics’ in fact competitors come from all over the United Kingdom, all of which demonstrates the magnitude of what Patrick‘s achievement.  Well done to Patrick – we are all very proud of him!  Patrick wasn’t the only BAC athlete at the Sainsbury’s School Games.  Also forming part of the SW Schools Team was Danielle Broom, with a Hammer Throw of 52.86, Jack Howlett, Shot Put, 12.59 and Madeleine Smith, with a Triple Jump of 10.88.  It is an achievement in itself to be selected to represent a regional schools team, so many congratulations to Danielle, Jack and Madeleine.

Another BAC athlete on the international stage is Janet Dickinson.  A brief report about Janet‘s involvement in the World Masters Athletics Championships in Lyon, France in August has already appeared, but we can confirm that, the Championships having now concluded, Janet, in her age category of V45, is 10th Heptathlete – in the world!  Well done, Janet!  In addition to this, Janet is the British Masters Champion in V45 Sprint Hurdles and Long Jump, having won these competitions at the BMAF Championships at Lee Valley 7-8 March, and currently holds the South West Veterans records in High Jump, Hammer Throw and Javelin Throw.