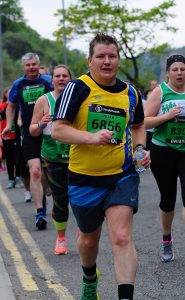 Julian Oxborough was one of 13,000 that took part in the Great Bristol 10k

Julian Oxborough completed the Simplyheath Great Bristol 10k on Sunday 7th May in a time of 1 hour, 16 minutes and 13 seconds. This was the quickest Julian had gone since returning to running following a 17 year absence from the sport and showed he is making good progress in his quest to get back to where he wants to be.

The race started on Anchor Road, near Millennium Square and Bristol Cathedral, running parallel to the historic Bristol Harbour before continuing onto Avon Gorge. The route also took the iconic Clifton Suspension Bridge, Spike Island and Cumberland Basin before passing the soaring Gothic St Mary Redcliffe on the way back to Anchor Road. It was a fairly flat course with just a couple of notable inclines.

Julian said he would highly recommend the race, which is part of the Great Run series  and attracted a huge field of over 13,000. Julian finished in 10,379th place and was 425th in the male 50-54 category. 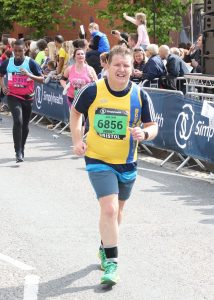 Julian giving his all in the latter stages of the race

This would have to go go down as a success for Julian given that it was only a two weeks after completing the London Marathon. He took it steady at the start of the race due to a slight knee concern and then eased into a rhythm before hitting the 5 mile mark in a very creditable 58:26.

Unfortunately he slowed quite considerably over the last 1.2 miles which showed his fitness isn’t quite where it needs to be yet but nevertheless, it was an encouraging step toward his goal of a sub-60 by the end of the year. 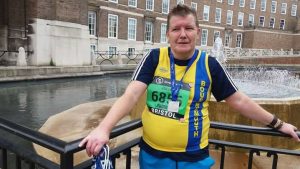 In other news, Jud Kirk was in action at the David Lloyd Ringwood Triathlon, which is a sprint distance event consisting of a 400m swim, 24km cycle and a 5k run.

Jud finished in 18th place out of 53  with an overall time of 1 hour 20 minutes and 22 seconds. This put him 3rd in his age category. Looking at the breakdown, he was 8th fastest in the 5k run with a super quick time of 19 minutes 35 seconds.

Not only is Jud a very accomplished runner though, he is also a swimming coach, meaning he’s also fairly adept in the water as well. The time for his swim and first transition was down as 8 minutes 43, which would put him 10th fastest for that sector.

It was really the cycle that let him down a bit, with his time of just over 51 minutes not quite matching up as well with those around him. That’s something he may be looking to work on going forward but overall, it was a pleasing result for Jud. The hardest part may well have been having to get up at 5:30 in the morning, but the inclusive breakfast he got afterwards went some way toward making it all worthwile.