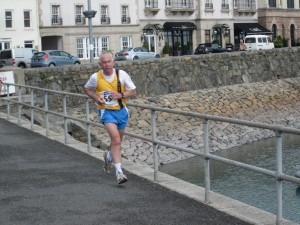 Congratulations to Jon Sharkey on his win in the annual Easter Quarter Marathon on Saturday 19 April, starting and finishing at Boscombe Pier. Jon was first of the 290 competitors in a time of 36.55, and in 40th position was Mike Cowham, completing the course in 44.57. In the ladies’ competition both Cherry Sheffrin and Helen Ambrosen ran well to achieve ‘podium’ positions, with Cherry as 3rd lady overall, 59th in 46.28, and Helen 2nd FV50, 84th in 48.32. In 10th position (40.19) was John Broom, an old friend of BAC, now a member of Barnsley AC.
Earlier the same day record numbers ran the local Parkruns, 643 in Poole and 250 in Bournemouth. In Poole Park Karl Welch was 3rd and it was pleasing to see Billy Nixon, a welcome returnee to BAC, representing the club. Also running at Poole was Adam Eason, who ran 7 minutes slower than his PB – maybe we should be seeing more of him at training! In Kings Park, Graeme Miller was 6th and Bridget Dence was once again the first lady. Joining Graeme and Bridget were Richard Felton, Paul Consani, Steve Cox and Bridget‘s brother Jim. Proudly displayed against Steve‘s name in the results is the ‘100’ logo, Steve having run his 100th Parkrun (24 in Bournemouth) the week before, when he was selected as ‘Parkrunner of the Week’ and was featured in the News section of the Parkrun website. Steve was asked which celebrity he would like to run with, and his answer was Steve Way, and who could argue with that?!

BAC were again represented at the Easter Races in Guernsey with Ian Graham and Dave Parsons (O60 vets) tackling the challenge of four races in four days.  This was Dave‘s 16th successive year at the event with Ian a mere ‘novice’ as this was only his 8th year in a row!  Accompanying then was Geoff Scott from Poole Runners with his 21st appearance at the Festival although, as Dave was quick to point out, he had missed a few years on the way!

The first race was the 10k road race on Good Friday and, for once, the weather was kind with plenty of sunshine and, although there was a strong breeze, it was less than on some previous occasions.  On arrival at the HQ for the race there was the usual ritual of looking around to see which other O60s were there and the main challengers were identified.  After his serious illness last summer, Ian was mainly aiming to complete all four races without any mishaps.  Dave felt that his training had gone better this year and was hoping for better performances than 2013.   He set off with some purpose and, after the initial rush, settled into a good pace and was very pleased to come home in 88th place (out of 220 finishers) in 44.49, his fastest 10k for four years.  He was delighted (really? – Ed) to see Ian finishing strongly just three places behind him in 45.19.  They then watched their expected O60 rivals coming in over the next few minutes and for some time felt that they had probably finished 1st and 2nd in their age category.  It was only several hours later that they discovered that old rival, Terry Bates, now of Isle of Man Veterans, had not only run but had finished 72nd in 42.24!  Unless Terry was not going to compete in all of the races or got injured, it was clear that winning the overall O60 category wasn’t going to be a realistic option for our two runners. 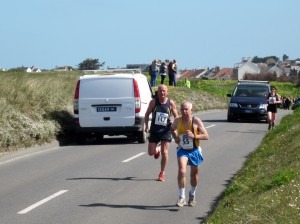 Dave Parsons approaching the finish at the 10k 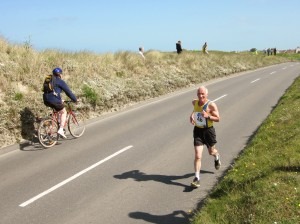 Ian Graham approaching the finish at the 10k – must do something about those shorts!

On the Saturday, the second race was the traditional ‘Long Course’ Cross Country event on L’Ancresse Common.  Following the storms earlier in the year, there was a small detour necessary at the far end of the course.  Dave set off hard but, this time, Ian kept him well within his sights and caught and passed him after about halfway.  They stayed fairly close together for the rest of the race with Ian finishing in a very satisfactory 58th place (118 finishers) in 36.12 and Dave just two places further back in 36.22. 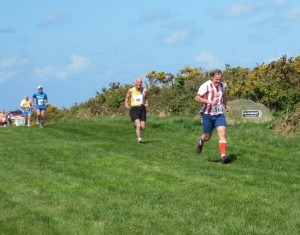 Ian Graham – those shorts again! – at the finish of the Cross Country with Dave Parsons in the background

Easter Sunday saw the Cross Country Relay being held on the ‘Stonecrusher’ course at L’Ancresse Common.  Dave and Ian were joined by Angela Brown and Geoff Scott (Poole Runners) and agreed that in honour of his great race at the London Marathon, their team name should be ‘The Steve Way Fan Club’.  Unlike the two previous days, the weather was truly awful, especially immediately leading up to the start.  Strong winds and heavy rain were very much the order of the day although, thankfully, it did improve for the later runners.  Dave led the team off but really didn’t enjoy the conditions with plenty of standing water around.  His time of 16.28 proved to be 117th out of 194 and 6th O60.  Angela ran the second leg and then Ian took over for the penultimate leg and put in a strong performance finishing in 15.55 (4th O60).  Geoff ran the glory leg and as he entered the home straight, the commentator gave him and the Team a fine mention which included a glowing tribute to Steve Way‘s performance in London!  The team finished 33rd out of 48 complete teams in an aggregate time of 67.32. 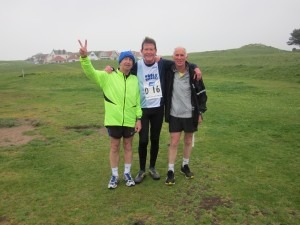 ‘The Steve Way Fan Club’ team (Dave Parsons, Geoff Scott, Ian Graham) minus Angela Brown who had very sensibly headed back to the hotel to dry out!

The final race of the weekend was the Half Marathon on Easter Monday which started and finished in St Peter Port.  Dave always looks forward to this race as it is more his distance.  Again he set off strongly and was joined by Ian after a few miles.  The two leading O60 athletes were in a group a little way ahead, however, Dave and Ian knew there was no point in trying to keep up with them and ran together till some time after halfway when Dave began to open up a small gap which he managed to keep to the finish, coming home in 1.39.25 in 67th place (159 finishers).  This was again his fastest time for over four years so the increased training this year had paid off.  Hardly had he finished, than Ian came racing in just two places behind in 1.39.37.  He may not be back to his best of the last couple of years, but this completed a remarkable series in view of his illness in 2013!

In the overall classification for the four races, Ian finished 31st with a total of 320 points and Dave just one place down in 32nd and 332 points and they were 2nd and 3rd O60s respectively.  Remarkably their aggregate times were 3.17.03 and 3.17.04!

Once again it was a superb weekend of racing and was a great chance to meet up with old friends and make new ones.  It really is a wonderful event and one to be highly recommended to all.