Two of BAC’s senior runners, Club President Ian Graham and Dave Parsons made their annual journey to Guernsey this Easter to compete in the traditional Guernsey Easter Runs which consist of four races in four days totalling the Marathon distance of 26 miles. Both were hopeful of good performances as training had gone fairly well.

The day dawned wet and windy and was far from promising. However, by the time the runners were beginning to assemble, the rain had cleared and it was just the prospect of running into a tough headwind on the second half of the course that was somewhat daunting.

There was time for the usual practice of finding out just who else was there and trying to establish what sort of form they might be in. The likely challengers to Ian and Dave for the V60 category appeared to be Martin Miller (Hercules Wimbledon/Chichester Runners) and local Guernsey ‘legend’ Brian Holden. However, there is nearly always someone who isn’t known or recognised who is about to spoil the party as they found out last year.

At the gun, Dave went out hard and it took Ian a little while to catch up but once he had done so, he gradually pulled away and by the time they reached the half way point just before turning back towards the finish, he was well clear. Although the wind on the way back wasn’t quite as bad as anticipated, everybody’s times were affected, even the leaders. Local star Lee Merrien was a comfortable winner of the race and the first lady, again by a clear margin, was international runner Helen Clitheroe in 31:37 and 35:19 respectively. Ian finished strongly in 44:28 (70th) and Dave over a minute behind in 45:48 (84th). When the results were first published, they were shown as 1st and 2nd V60, however, they were subsequently corrected when an error was found as a runner from St Edmund Pacers, Steve Rue appeared in 77th place with 44:47. Nevertheless a very satisfactory start with Martin and Brian well behind! 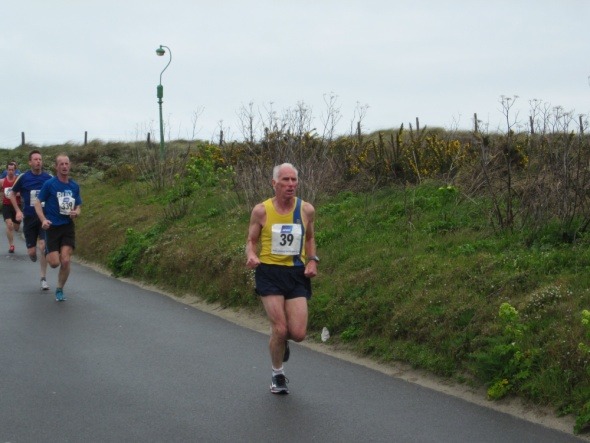 Ian approaching the finish of the 10k 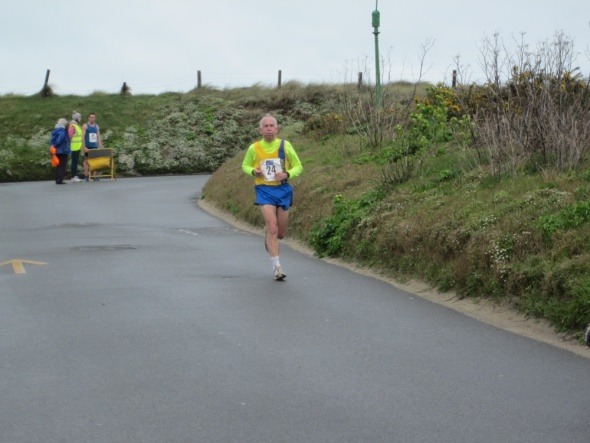 Dave approaching the finish of the 10k

This race is run in memory of Guernsey & BAC runner Keith Falla who was sadly killed when hit by a car when training in New Zealand. This year is the 40th anniversary of the accident and it was fitting that Keith’s widow, Caroline Marler (also ex BAC) was there not only as starter for the race but also to participate.

After his disappointing 10k the day before, Martin Miller made a more positive start. The first mile or so is on true cross country terrain of uneven ‘clumpy’ grass followed by some rolling hills with many rabbit holes to safely negotiate. On this part of the course, Ian was finding it hard to stay with Martin and Dave had already quickly fallen back from them both. When the course changed to gravel and grass paths, Ian was soon able to catch and pass Martin and he continued to pull away finishing almost a minute clear in 46th place in a time of 35:00. Martin and Dave were both overtaken by Steven Rue who was 2nd V60 to finish with Martin 3rd (35:58) and Dave 4th in 36:58 (53rd overall).

For those travelling without a full four person team, other runners are found/adopted to make up teams for this relay. Ian and Dave, running as relay team ‘Scott Free’ with reference to the absent Geoff Scott who was busy elsewhere starting his long distance Coast Path walk from Minehead to Shell Bay, teamed up with two Welsh ladies who were staying in the same hotel, Angela Jones and Dawn Lee. Angela is a top class Welsh triathlete and personal trainer and Dawn is a swimming instructor who in June of this year is due to attempt to swim the English Channel (we wish her every success).

Ian was quite rightly nominated as the first leg runner and with Martin and Steve both also running the first leg for their respective teams, we were in for a tight battle of the V60’s on that leg. There are several opportunities to see the runners on each leg and when they first came into sight, Martin was leading this V60 group with Ian right behind and Steve just a few yards further back. When they next came into view Martin was still just ahead of Ian and Steve had dropped back a bit. Ian later said that he was just beginning to think he would have to let Martin go when, on the second half of the course, Martin began to slow and Ian forged ahead and finished in 20th place in 14:54 (fastest V60 for the day) with Steven following in 15:04 and Martin 15:10.

Dave (who confesses to hating this race) took over on the second leg and managed to gain one place to hand over in 19th place with a time of 15:48 (40 seconds quicker than last year). Angela ran a terrific 3rd leg storming past a number of runners and was eventually credited with a time of 13:07 moving us up to 15th position. (She was eventually to complete the weekend as 3rd lady overall – a terrific performance for a 49 year old!!). Dawn was just looking to complete the course in under 30 minutes as she doesn’t profess to be a runner. The rest of the team positioned themselves strategically around the course to give her every encouragement. She came home smiling broadly in a time of 23:01 with the team finishing 24th – a very good team effort. 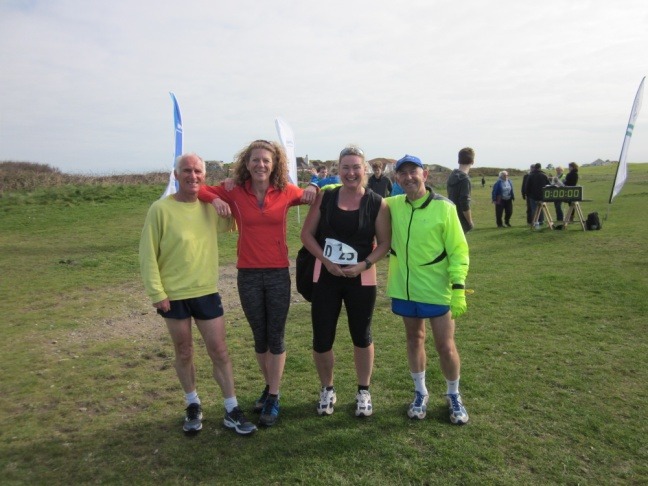 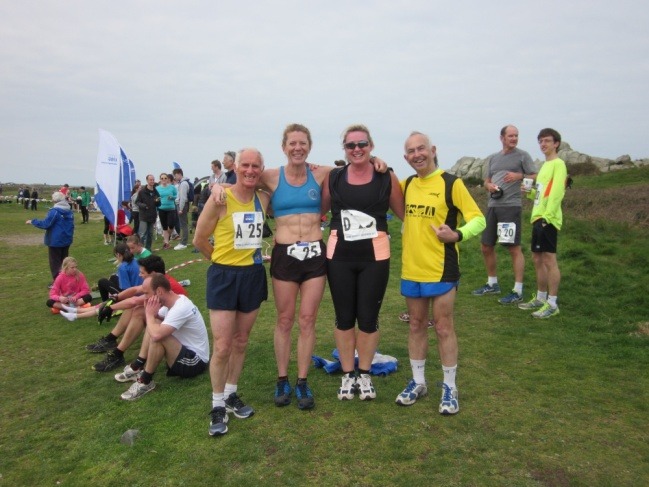 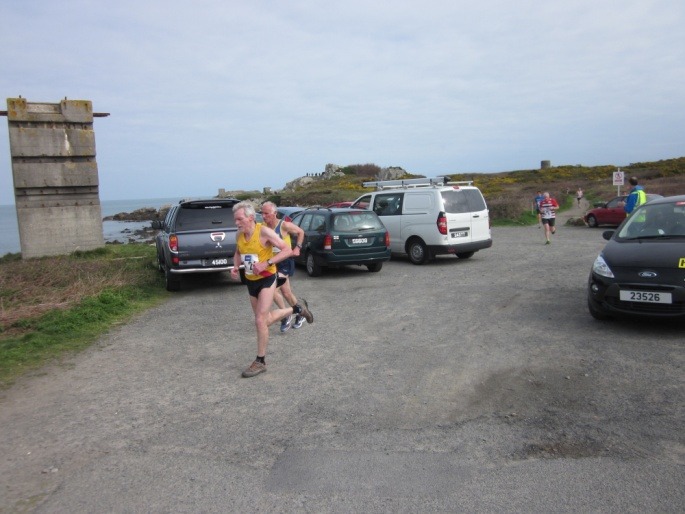 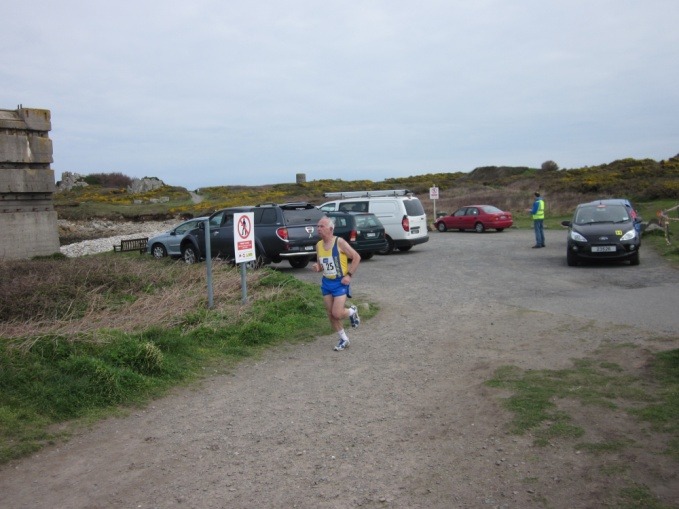 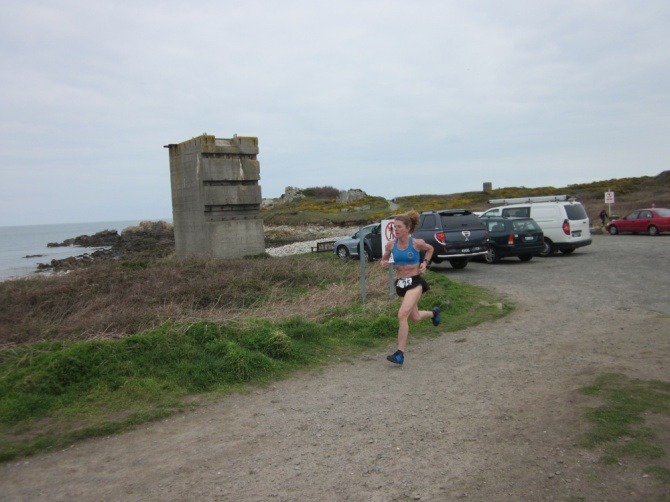 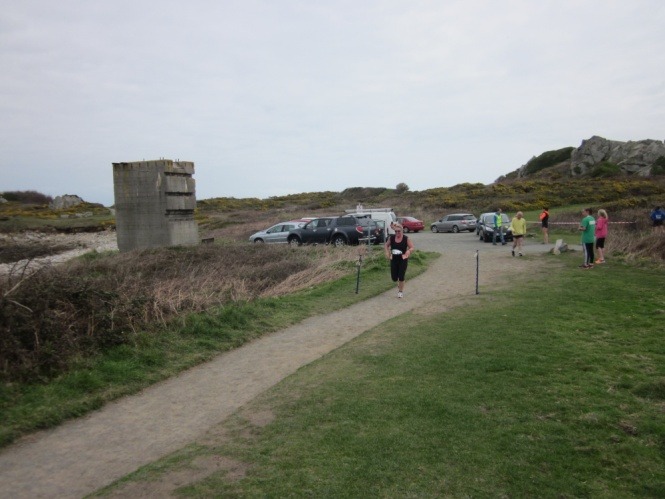 Dawn on her way with Ian encouraging in the background

The weather for the final race was pleasant but with a brisk cool wind from the North East which would hopefully be a help on the way back to the finish at St Peter Port. Ian was well clear in the battle of the V60’s with Dave just in second, 8 places ahead of Martin. Steve was not competing in this final race so all that was needed to complete a BAC 1 – 2 was for Ian to finish without falling over and Dave to be no more than seven places behind Martin.

Then just before the start, we saw that Bill Adams from the Shetland Isles was there for this final event so Ian would have a fight on his hands to achieve the desired clean sweep.

Dave is usually very strong on this his favoured event, however, this time, Ian began to pull clear early on and Dave was finding it really tough to maintain any reasonable pace. Bill Adams also soon passed him and set off in pursuit of Ian. At the half way point, Ian began the long return journey and was startled to see that Bill was quite close to him and this forced him to push on as hard as possible. Not wanting to look back at any point, he just kept pushing all the way to the finish. Despite the hope that the wind would help on the way back, he was disappointed to find that for the most part, it still seemed to be a headwind! Ian was rewarded with the excellent time in the conditions of 1:37:47 in 48th place. It was almost 6 minutes before Bill came in 66th in 1:43:42.

Dave who, at one point, was overtaken by Martin, managed to keep going well over the last half of the race and finished just two places behind Bill in 1:44:22 for 3rd V60 on the day and to clinch 2nd V60 for the weekend. 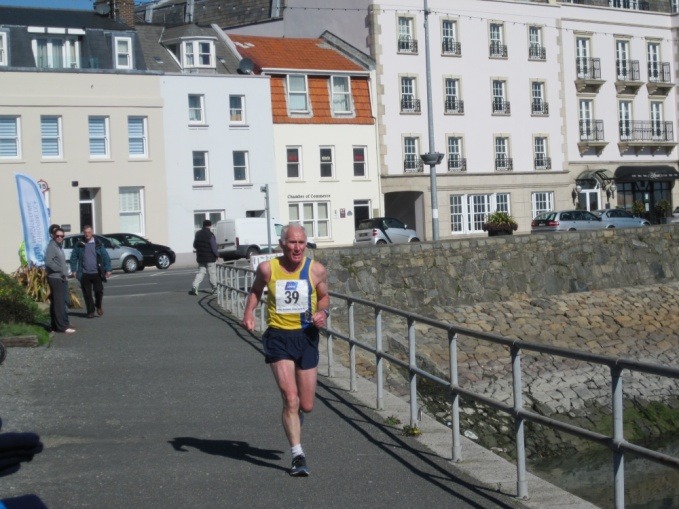 Ian finishing the Half Marathon in splendid isolation! 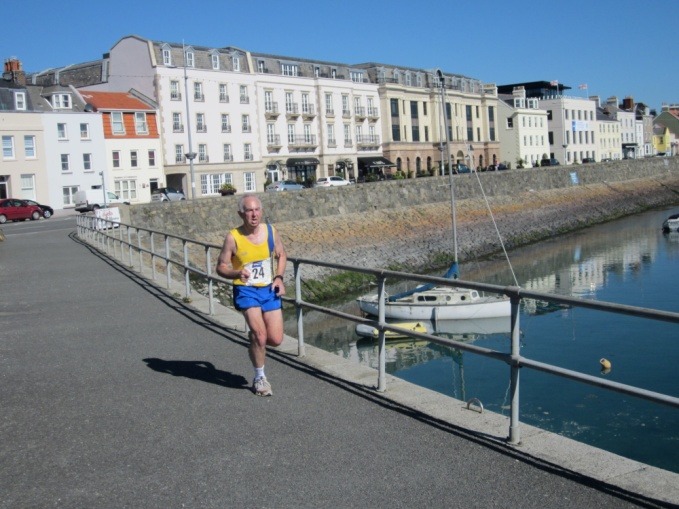 Dave finishing the Half Marathon also in splendid isolation!

And so to the Presentation which was held outside on the sun terrace at one of the Cliff-top Hotels in Guernsey and Ian was justly rewarded for his efforts with all four V60 prizes. 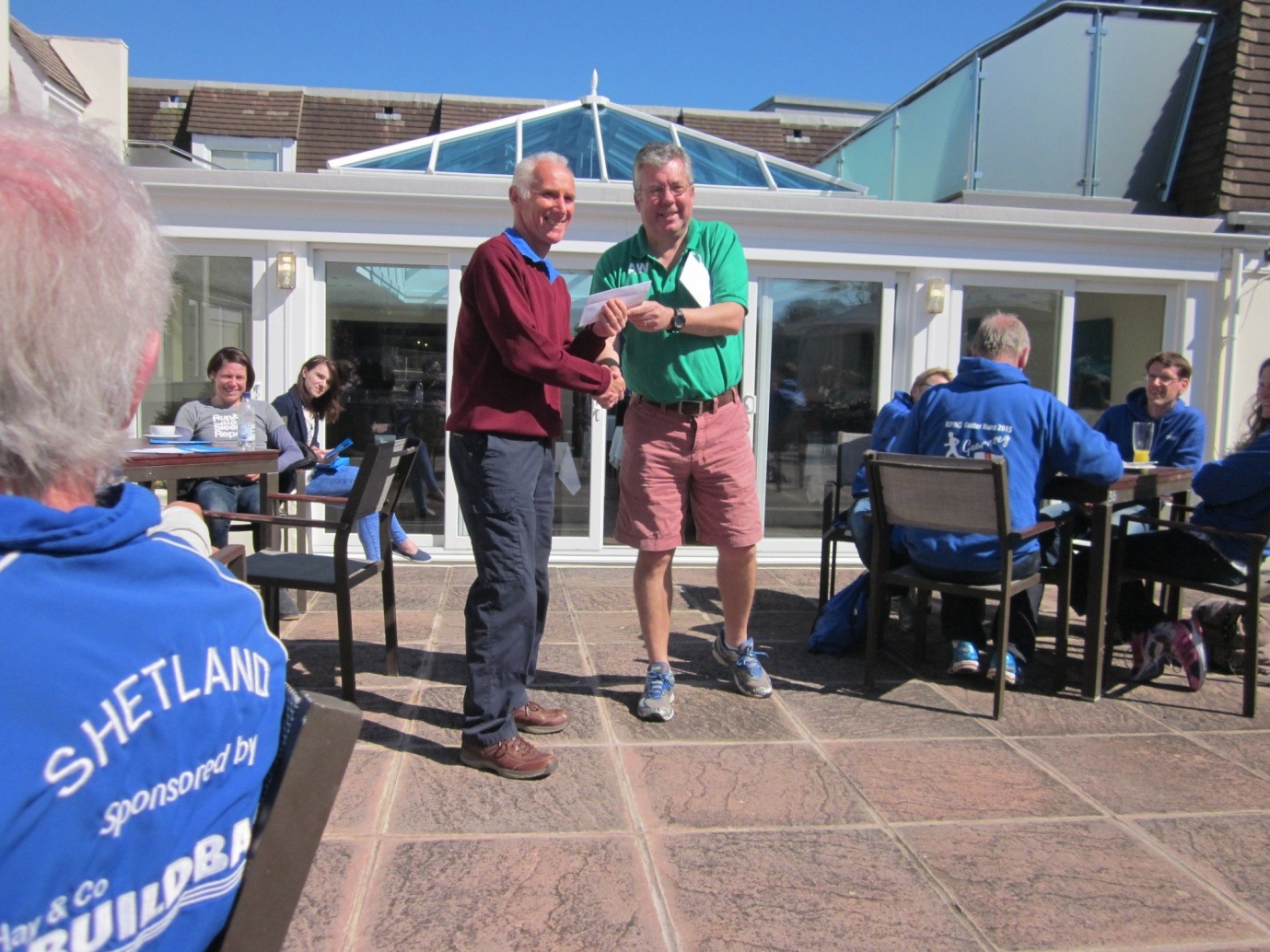 All in all, it was a very successful and enjoyable weekend. Here’s to 2016 when perhaps some other BAC runners might join us!!