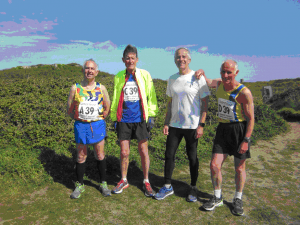 Two of BAC’s veteran athletes travelled to Guernsey again this year for the Easter Running Festival and successfully completed the four races in four days. Dave Parsons competed for the 19th successive year and Ian Graham was running for the 11th time. Both went in the knowledge that injuries and/or illness had severely hampered their preparation and that it would be a combination of a good social weekend with old friends and an opportunity to test their current fitness.

The weekend followed the same format as 2016 and began with the 5k road race on Good Friday which turned out to be a fine sunny day which was excellent for spectators who could sit in the sun at the Athletics Stadium in Footes Lane waiting for the runners to finish on the track. The course (new last year) is proving popular with the runners as, although there are some inclines, there are also some good long straightishsections with not too many twists and turns. Ian ran a good strong even paced race and came home in 114th place (204 finishers) with a solid time of 22:52. Dave had a strong start and despite fading a little towards the end (I think this has happened before!) was very pleased with 129th place in a time of 23:54. When the results were published, there was the usual examination of them in fine detail to see where they had both finished in the Over 60 category (the results are in 10 year age groups), although as they are both towards the top end of this age group they were not expecting too much. It was, therefore, pleasing to discover that they were 4th and 5threspectively although it was a little chastening to also discover that the first Over 70 had finished in 21:55. He wasn’t however seen competing again over the weekend! 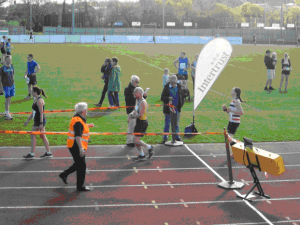 Ian checking that the time was correct 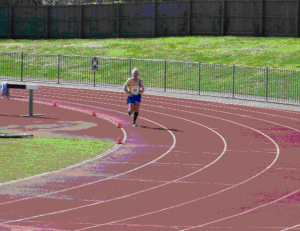 The race on the Saturday was the same as always, the Keith Falla Memorial 4.75m Cross Country over the ‘Full Course’ on L’Ancresse common. Apart from a few minor alterations, this course has been used every year for the Easter Runs and is held in memory of Keith Falla who was tragically killed when training in New Zealand many years ago – Keith was at one time a BAC athlete. Although there was a strong wind (fortunately helping in the final stages) the conditions were good apart from a nasty short shower just prior to the start. Ian put in another fine solid performance finishing 83rd in 38:07(129 finishers) with Dave who had set off more conservatively this time, finishing in 93rd in 40:25. This time they were 5th and 6th in the Over 60 category and no Over 70’s ahead. 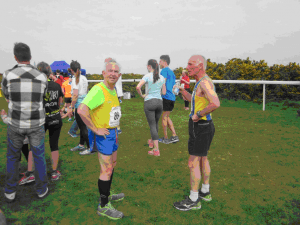 Easter Sunday brought perhaps the best conditions for the cross-country relay for many years. The   4 x 1 mile race was again held on the ‘Stonecrusher’ course, again on L’AncresseCommon. This year, the course had been improved (at least Dave thought so) and although there were still a couple of very testing ‘climbs’, a number of the twists and turns had been removed. Dave and Ian were joined by two colleagues from Poole Runners (Dave Ozanne and Geof Scott) to form ‘The Dorset Weebles’ although the race organisers called them ‘Weeblies’ so that is what is in the results. The plan was simple – Dave P would go off on the first leg and establish the team in a good position, Dave Ozanne would bring us into contention, Geoff would consolidate our position leaving Ian with the glory of taking the team to glorious victory. Unfortunately, by the time we got to Ian’s leg, some of the teams had already finished so he was robbed of the glory! We finished a highly respectable 38th out of 45 teams with Dave 131st fastest leg (180 competitors) with 7:35 and Ian very close behind in 132nd with 7:37.

The Dorset Weebl(i)es after the race.
Dave claims the prize for the most colourful (hideous?) vest – the infamous ‘I Was Or Am A Runner’ pinwheel vest! (quite a talking point on the start line)

And so to Easter Monday and the final event the 10k road race. Another new course this year which was ‘point to point’ from Grandes Roques to St Sampsons. This was the 5thdifferent course that Dave has run for the 10k on Guernsey and he felt that it was probably the best so far although had the strong wind been against rather than predominately behind, he might have felt differently. There were two more good runs from Ian and Dave finishing in 97th 47:33 and 109thin 48:50 respectively (186 finishers) to round off a good weekend’s racing. 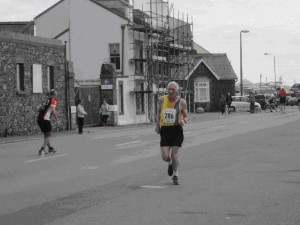 Ian finishing the last race of the weekend at St Sampson 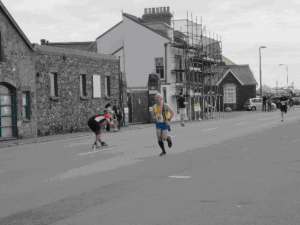 After returning to the hotel and a quick shower, we all went off to the Hockey Club for the Presentation of the awards. This year, although we didn’t know before the Presentation, there were no specific awards for the Over 60 category. Instead, the organisers had combined all the runners over 60 and 70 into one group and calculated the ‘age related’ results so for the first time ever, we went home ‘empty handed’. Actually this isn’t quite correct as at the Social Quiz Evening on the Saturday Night, the Dorset Weebles (including Sue Parsons and excluding Dave Ozanne) were victorious! 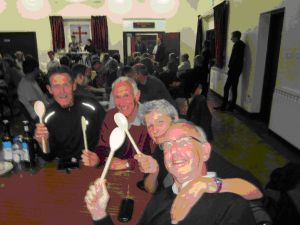 The Dorset Weebles with their wooden spoons!!

All in all another superb weekend on the beautiful island of Guernsey.