Half Marathon success in Marrakech for Simon Hearn 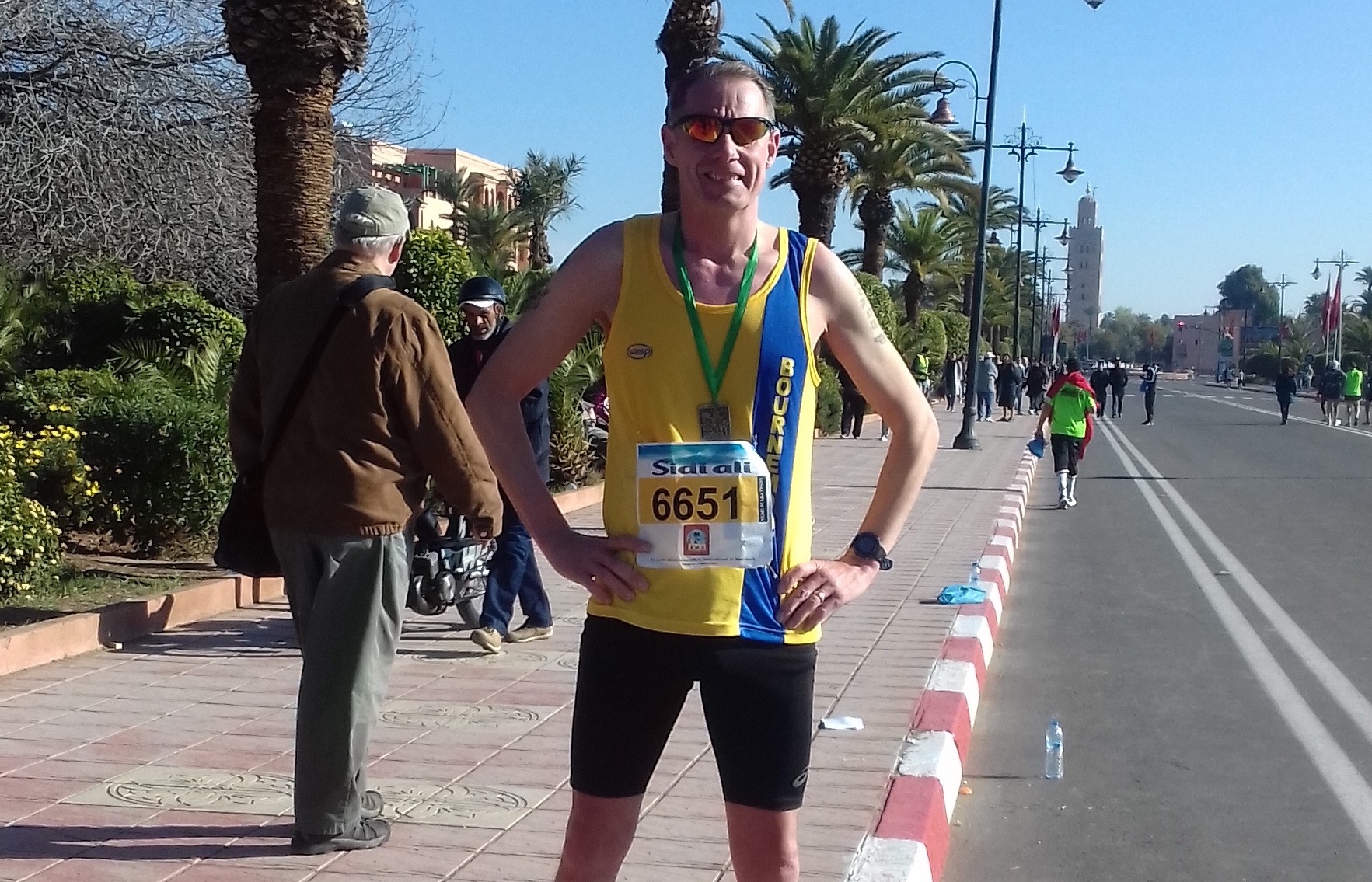 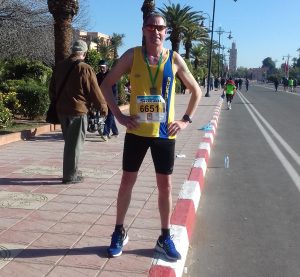 Simon Hearn enjoyed a short break in the Moroccan sunshine before lining up for the Marrakech Half Marathon on Sunday, 28th January

With the cold, drab weather that tends to befall this country every January, it’s often tempting to look for an escape. Even just a few days of warmth and brighter surroundings would help lighten the mood somewhat.

For most of us though, work commitments rule out the possibility of that, forcing us to put our heads down and get on with it. That was not the case this month for Simon Herne though. He had set his sights on the Marrakech Half Marathon on 28th January and had a nice little break in Morocco to look forward to.

Flying out on the Thursday beforehand, Simon would have a few days out there with his wife Joanne to explore the area, sample the local cuisine and above all, relax before his big race on Sunday.

The Marrakech Half Marathon is renowned for being one the flattest and fastest in the world. The exotic location, with it’s palm tree laden roads and mild January temperature make it an attractive prospect for local and international runners of all abilities.

It was certainly enough to get the juices flowing for Simon. He wasn’t there purely to enjoy the sunshine and the lamb tagine. He had brought his game face and was there to race!

Having booked the break last summer, the Marrakech Half Marathon was a race that Simon had been looking forward to for quite some time and his training since the end of November had all been geared toward it.

Over the summer months, Simon had seen his level of performance drop slightly in comparison to what he’s used to and he’d been suffering a bit through lack of motivation. He’d also been devoting a lot of his time and attention into coaching Bournemouth AC‘s kids, running the Thursday night training sessions at Kings Park and also helping to guide and aid their improvements in parkruns.

On top of that, he’d been focusing on his coaching course in a bid to achieve his running fitness qualification. The level of study and hard work he had to put in for that had meant his free time had become somewhat restricted.

Once the Marrakech Half Marathon began to loom on the horizon and it was time for him to start his 10 week training programme, Simon knuckled down and managed to shift the focus back onto his running.

With his motivation back and his mojo rediscovered, Simon’s performances began to pick up again. He was back to running 6 days a week putting in some very hard sessions in a bid to get in the best shape possible for Marrakech.

When the time came for him to fly out, Simon was in a relaxed mood, but at the same time, very excited. His primary target was to finish in under 1 hour 30 minutes. This is usually the aim for Simon when going into a targeted half marathon race and, more often than not, he manages to achieve it.

His last attempt was back in May at Milton Keynes, where he got very close to that marker but just missed out by 30 seconds. That blot on his copybook had given him a steely determination to redress that balance in Marrakech.

When he arrived on the morning of the race, Simon was surprised to see there were no starter pens according to what time each participant was expecting to finish. That made for a bit of a free-for-all at the start, with runners of all different paces jockeying for position.

This resulted in Simon being held up on numerous occasions and he was initially unable to get up to the pace he was intending to run at. Once the first mile was done, it spaced out and he managed to settle into a rhythm and get back on track. 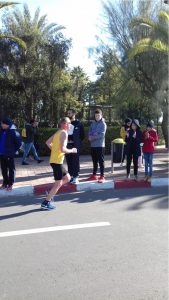 After a chaotic start to race, Simon got into his stride and made his way down palm tree encrusted roads of Marrakech

From that point on, Simon felt really strong. The conditions were excellent for running. It was a bit warmer than the January weather in England, as you would expect from Morocco, but it wasn’t too hot.

There were regular water stations with bottled water so staying hydrated was not a problem. The only issue was that instead of tossing their bottles to the side of the road like everyone does in England, people were just dropping the bottles in the middle of the road. This meant that whenever he was near a water station, Simon had to watch where he was stepping to avoid all the bottles that were on the floor.

Nevertheless, the hard training he’d put in really seemed to pay off and Simon was able to maintain his pace all the way to the end. He’d managed the race very well and was overjoyed when he reached the line, clocking a tremendous time of 1:29:36.

This put Simon in 385th place out of a field of over 4,000. He was also the 5th British finisher in the race. It was a fantastic result for Simon and he was delighted with the outcome. In fact, he thoroughly enjoyed the whole experience and said he would definitely recommend it.

Following on from his success in Marrakech, Simon is definitely keen on exploring the possibility of entering other races abroad in the future. It’s now just a question of where next.

On another note, there was some additional good news for Simon as he found out that he’d passed his “Coach in running fitness” qualification. This was again a testament to the hard work and endeavour he puts in when he sets his sights on something. It was also another very good reason to celebrate. 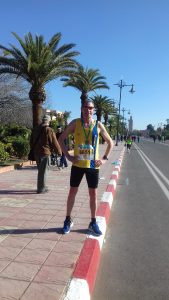 Simon’s race went according to plan and he was extremely pleased with the end result, completing the course in a stellar time of 1:29:36