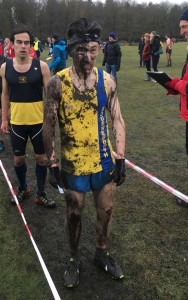 Rob McTaggart – proof of how muddy it was at Dibden Inclosure

What could have been an unfortunate end to the Hampshire Cross Country League season for BAC‘s senior men was turned into a success by a strong team, and a good turn-out at the final fixture at a very muddy Dibden Inclosure in the New Forest on Saturday 13 February. After the first two fixtures last year the senior men were firmly fixed at the bottom of Division 1 of the League, but well done to those who competed in those early days, which ensured we did have scoring teams at each fixture, without which we would have been out of the League altogether. However strong performances at the final three fixtures pulled BAC out of the relegation zone, to remain in Division 1 for the next season.  The star of the show has been Dave Long, who ran in all three of the final fixtures, finishing 5th, 7th and 3rd, supported by Rob McTaggart in all three, finishing 11th, 14th and, after a dramatic fall into the mud at Dibden Inclosure, 27th.  Steve Way and Graham Robinson also made major contributions, each competing in two of the three fixtures.  The team in the final fixture was completed by Jacek Cieluszecki and Ross Smith.  Success also for BAC‘s Vet Men, finishing the season with a League position for the first time for years, the team on 13 February consisting of Steve Way, Damian Boyle and Simon Hearn.  A total of 12 Senior/Veteran men competed at this fixture – it was pleasing to see such a strong BAC presence, with BAC vests everywhere, so congratulations to everyone, scorers and non-scorers alike!  Congratulations also to BAC‘s ladies, who, for the first time in memory, achieved final positions in the League table, both Senior and Veteran, a result of organisation and teamwork which has produced dramatic results, cross country and road, in a very few years.  Heidi Tregenza, Nikki Sandell and Joy Wright made up the Senior Ladies’ team on 13 February, with the Veterans’ team consisting of Nikki, Joy and Caroline Rowley, and Louise Price, ever present, there as the vital backup to both teams.  The ‘downside’ was that the four junior BAC athletes competing were the only club representatives of the club in their respective races – hopefully with the increasing membership resulting, mainly from the Wednesday Development Evenings, next season they will have teams supporting them.  Brandon Meredith, Bridget Dence, Tom Farwell and Anya Sandell deserve this, as they have all been loyal and consistent club athletes throughout the season.  Bridget ran extremely well to finish third in her race, and well done to Anya, who insisted on competing despite feeling distinctly unwell.  Results (BAC): Senior/Veteran Men: 3. Dave Long 33.35;  11. Steve Way 35.06 (2nd Vet);  13. Jacek Cieluszecki 35.09;  27. Rob McTaggart 37.10;  49. Ross Smith 38.37;  77. Damian Boyle 40.25;  104. Simon Hearn 42.23;  111. Jud Kirk 43.23;  126. Steve Cox 45.22;  136. Simon Hunt 46.21;  138. Andy Gillespie 46.34;  152. Ian Graham 49.47.  Senior/Veteran Ladies: 13. Heidi Tregenza 23.35;  23. Nikki Sandell 24.39;  44. Joy Wright 26.35;  64. Caroline Rowley 28.11;  69. Louise Price 28.38.  U17 Men: 11. Brandon Meredith 22.40.  U17 Women: 3. Bridget Dence 17.14.  U13 Boys: 21. Tom Farwell 10.44.  U13 Girls: 55. Anya Sandell 15.21.  The Senior Mens’ team was 2nd on the day in Division 1, and aggregate 5th for the season, having finished 10th, 10th, 3rd, 3rd and 2nd in the five fixtures.  The Veteran Mens’ team was also 2nd on the day (Division 2), aggregate 3rd for the season, having finished 7th, 8th, 2nd, 3rd and 2nd.  The Senior Ladies’ team was 5th (of 16) on the day, aggregate 5th (of 11) for the season, and the Veteran Ladies‘ team was 3rd (of 10) on the day, aggregate 2nd (of 6) for the season.  In the individual placings for the season, Dave was 4th Senior Man, Heidi 8th Senior Lady, and Nikki 4th Senior Lady. 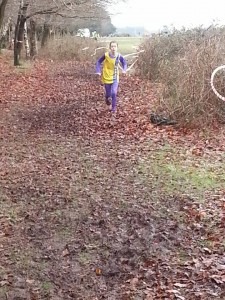 The next day, Valentine’s Day (with all finishers being presented with a red rose!), there was another strong BAC turn-out at the Lytchett 10 (mile) race, organised by Lytchett Manor Striders.  Steve Way and Anthony Clark (both of whom incorporated the race into a longer run) were the first two of the BAC team which won the Open competition, with Ross Blakemore, running for the first time in BAC colours, and Tony Hunt making up the balance.  Gemma Bragg won the prize for first Senior Lady – Gemma was second lady overall.  The race also doubled as the BMAF and SWVAC 10 mile championships, and Helen Ambrosen won silver medals for both in her age category.  and well done to Sam Laws, who chose this very hilly course to compete in her very first race at this distance!  The Lytchett 10 was also the Dorset County 10 mile Championship race, so there will be some BAC County medals when these are confirmed.  Results (BAC): 2. Steve Way 57.29;  12. Anthony Clark 1.00.48;  24. Ross Blakemore 1.04.08;  40. Gemma Bragg 1.06.38;  77. Tony Hunt 1.12.15;  152. Ian Graham 1.21.08;  197. Helen Ambrosen 1.25.52;  286. Sam Laws 1.38.05. 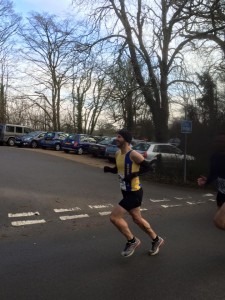 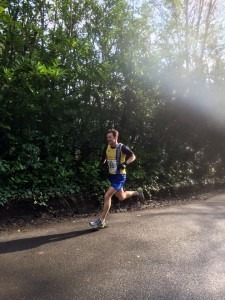 Ross Blakemore competes for the first time in a BAC vest – and wins a team prize! 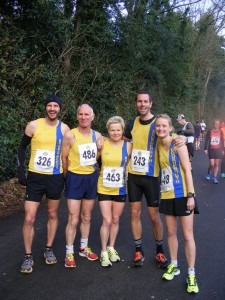 Earlier this month, Pat Robbins competed in – and won! – the Arc of Attrition 100 (mile) race.  This is described as the “South West’s toughest ever footrace”, taking place for 100 miles of the Cornish Coastpath from Coverack to Porthtowan.  Anyone who has tackled this National Trail will testify that it is Up and Down for its entire length.  The information about the race is that it is ONLY suitable for experienced ultra runners, which Pat certainly is.  Pat‘s winning time was 22.44.49.