Heather dances her way through the Dartmoor Discovery 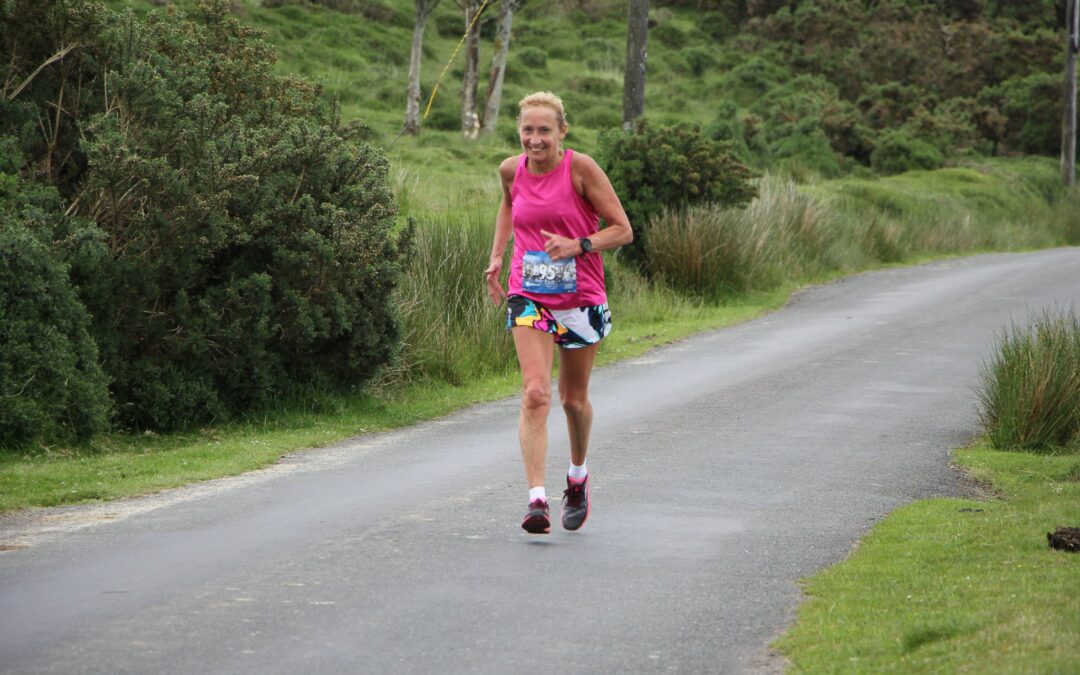 There aren’t too many running events where you can say that the actual running has been overshadowed by other aspects but at the Dartmoor Discovery, you could almost say that. And that’s quite a statement because the running element of it is spectacular. The 32 mile course is the UK’s longest single lap road race and with hills totalling almost 4,000ft of elevation, it is not be taken lightly.

At the same time though, there is an element of light-heartedness about the whole event. It’s really just all about a group of runners getting together and having a fun weekend whilst engaging in the activity that they love. What could be a better basis for an event than that?

It was Heather Khoshnevis‘s 10th time at the Dartmoor Discovery, which is a stat that speaks volumes about it in itself. In her view there couldn’t possibly be anything not to like about it. From the moment they arrive on the Friday morning to the point when they leave after the traditional full English breakfast on the Sunday, there is a huge buzz of excitement amongst the gatherings of runners, supporters and race crew in Princetown. And if you’re camping or staying in one of the local bunkhouses, it all happens right on your doorstep. 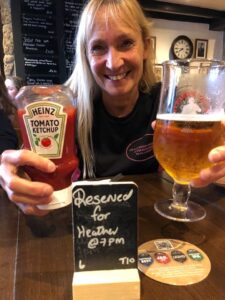 Heather Khoshnevis prepares for her hilly 32 mile race in the usual way… with ketchup and a pint!!

According to Heather, the two most important factors about the event are the astronomic course elevation and the £3.50 drinks at the bar afterwards!! You are very well fed after you cross the finish line and they have a proper Old School Disco in the evening which gets everyone up dancing the night away. It’s surprising what your legs can do when you don’t stop until it’s time for bed! 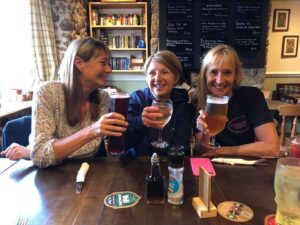 As well as the running, the Dartmoor Discovery features a very vibrant social scene

The race starts out at the base camp in Princetown and sets out on a route which passes through Dartmeet, Poundsgate, Newbridge, Ashburton, Buckland in the Moor, Widecombe in the Moor and Postbridge before looping back to the finish in Princetown. Of course, it goes without saying that the scenery in Dartmoor is stunning but with all the rolling hills, it a real test, both mentally and physically. 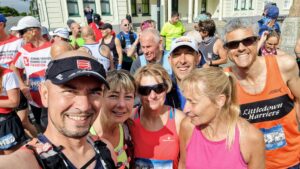 Heather went into it without having done her usual quota of marathons beforehand. In fact, the North Dorset Village Marathon was the only one she’d done so far this year. And before that it was eight months since she’d done her last one, whereas normally she knocks them out on a regular basis. It was going to be interesting to see how much of a difference that would make. 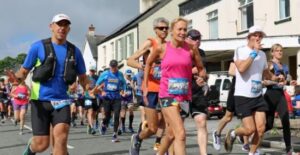 Heather sets off on her way

As it panned out, she managed to get up to around 24 miles with no issues and feeling like she was trained well enough for that. After that though, her body started to remind her that she hadn’t done as many marathons beforehand this time and her endurance wasn’t quite at the level it needed to be. 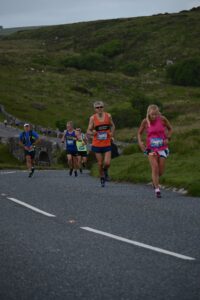 Heather makes her way up one of the many slopes 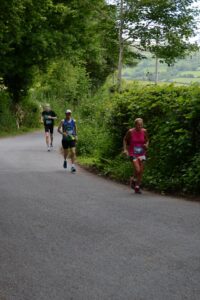 Heather comes around the corner 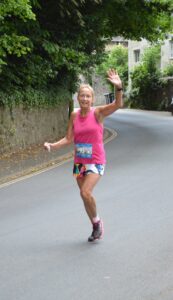 Heather gives a wave as she heads past the camera 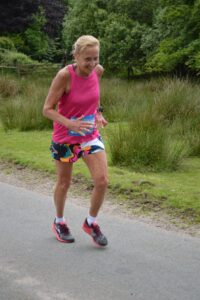 Going through the marathon mark in 4 hours 14 minutes and 19 seconds, it was only the last 10km left to go for Heather. Even though she was suffering after that, she managed to push on through and complete the course in a time of 5 hours 28 minutes 49 seconds. It wasn’t her best time but it also wasn’t quite her worst time either. 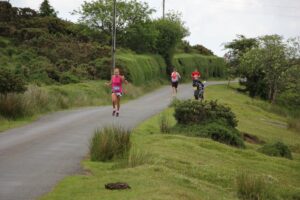 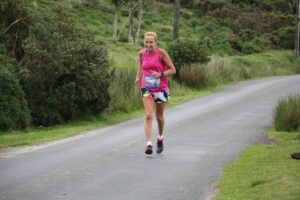 That meant she had just 10k left to go

It was enough to see her finish 1st in the F60+ category. It also earned her some beer money for breaking the F60 record which had been set the previous year in a time of 6 hours 11 minutes. They were two good reasons for Heather to be happy with her performance despite not quite managing as well as he would’ve liked in the latter stages.

She finished in 66th place out of the 165 runners who took part and was 12th fastest female. Alice Smith of Weston AC was 1st lady, getting round in 4 hours 23 minutes and 41 seconds, which put her in 13th place overall. 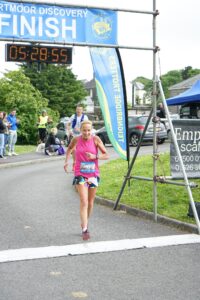 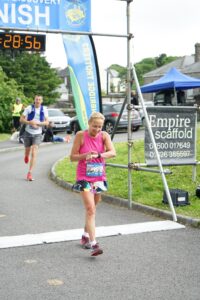 Heather stops her watch after a job well done 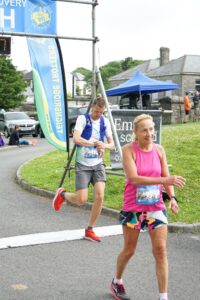 It was a relief for Heather to get over the line

Kelly Dicks of Great Western Runners was the next woman in and she completed the course in 4:42:42 which put her in 24th place. Hannah Brown of Exmouth Harriers was 3rd female in 4:48:17 and that put her in 27th place in the overall standings. 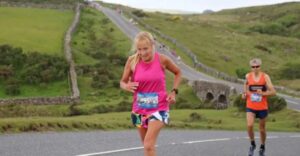 The outright winner of the race was Ryan Snell of Romsey Road Runners and he managed an incredible marathon time of 2:58:59, despite the huge elevation, and then went on to complete the full distance in 3 hours 46 minutes and 27 seconds.

He was the only man to get over the line inside four hours. Dean Bennett was Running Forever was 2nd in 4:02:29, with Kieron Summers of Weston AC taking 3rd in 4:04:11. 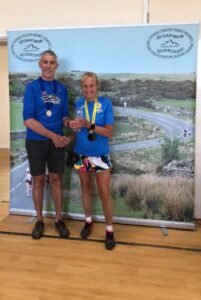 Heather receives her prize for winning the F60 category

Littledown Harriers pair Paolo De Luca and Mark Packer were also there and they finished in 45th and 46th places in times of 5:15:17 for Paolo and 5:17:01 for Mark. 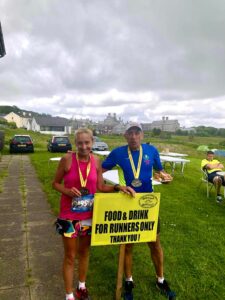 Heather with Paolo De Luca after completing the race 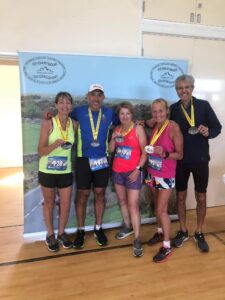 Heather and all her friends conquered the dastardly route

It was a lesson for Heather to learn in the sense that she knew more more marathons are better for her when preparing for a longer distance race. Therefore, she will endeavour to do more prior to next year’s Dartmoor Discovery.

The fact she’s already committing to next year’s event and looking forward to it shows how much she enjoyed the experience. She’d even go so far as to say, if there was only one race allowed every year, the Dartmoor Discovery would be her number one choice by far. 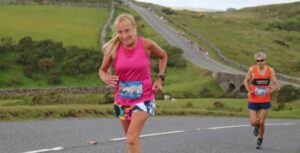 She didn’t even require much time out to recover from it and was back in road race league action the following weekend at the Round the Lakes 10k. That’s a testament to the dedication that Heather exhibits to her running and also her competitive edge. She’s well out in front in her age category for the Dorset Road Race League season and is very much determined not to let that slip. 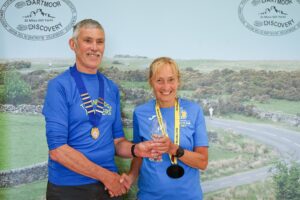 Heather set a new course record for her age category