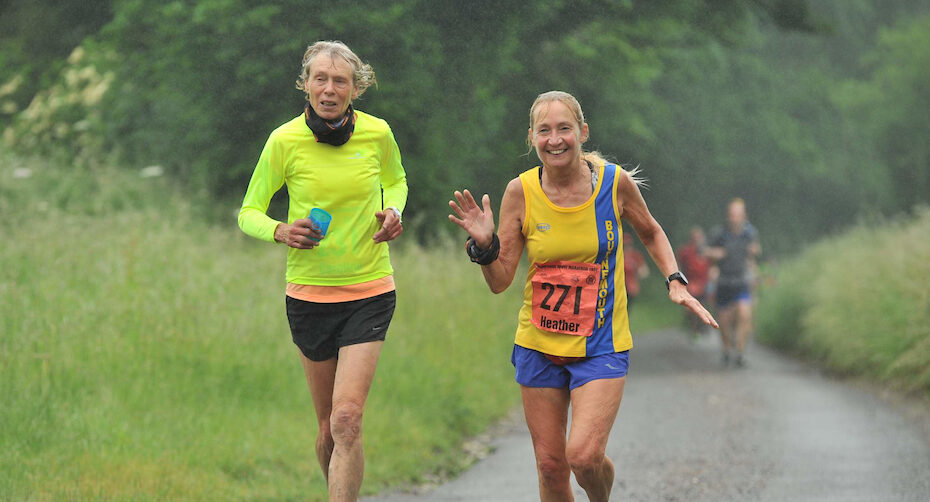 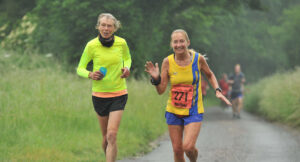 Four of Bournemouth AC‘s more seasoned campaigners were in action at the Hampshire Hoppit with Heather Khoshnevis ticking off another Marathon and Helen Ambrosen, Ken Parradine and Debbie Lennon in action in the Half Marathon.

The Hampshire Hoppit Marathon and Half Marathon races are on a tough, hilly, off-road route and included sections of the Wayfarers Walk footpath and the marathon race also went along the Harrow Way.

Both the Marathon and the Half Marathon were single lap courses, starting and ending in Kingsclere, on the Hampshire/Berkshire border. The route passed through Watership Down, the setting for the famous novel.

Encompassing some of the highest points in Hampshire, the Marathon incorporated an elevation gain of 650m whilst the Half Marathon included 330m of ascent. 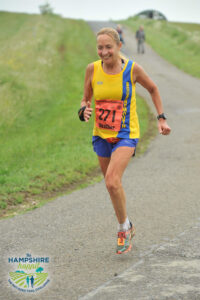 Heather was competing in her 138th marathon 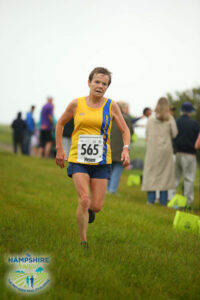 Helen Ambrosen was doing the Half Marathon 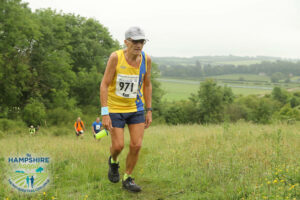 Ken Parradine was also in action in the Half Marathon 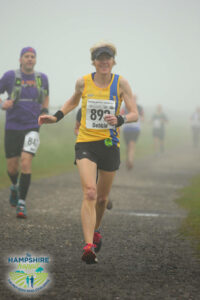 Although she’s much more akin to running on the road, Heather had done the race back in 2016 and strangely enough, had enjoyed it, so she thought it would be a good one to test her strength on after so long without racing.

She did win the age-category prize in her return to racing action at the Kempton Park Marathon where she finished in 3 hours 43 minutes, so the lengthy lockdown period clearly hadn’t left her too rusty. 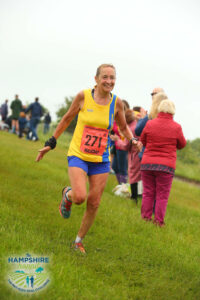 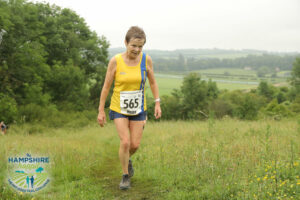 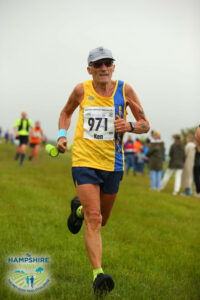 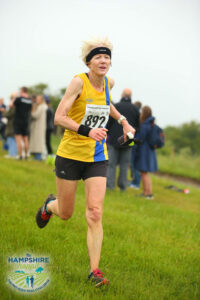 It was the first race Helen Ambrosen had done for quite a while after spraining her foot back in March. That injury then turned into tendonitis which ended up taking a long time to settle down.

The Hampshire Hoppit Half Marathon seemed like a good way to get the ball rolling again, although she was certainly, by no means, easing herself into it.

Debbie Lennon was facing her first half marathon race in over 30 years!! She used to run for Bournemouth AC back in the late 70’s and 80’s. 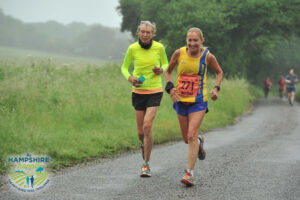 Heather and Caroline attack the marathon together 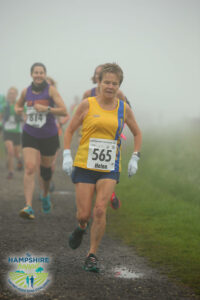 Helen gets the white gloves on 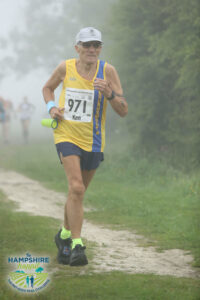 Ken makes his way along the trail 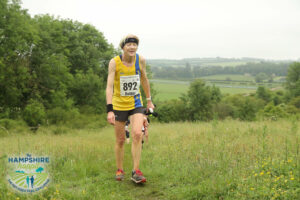 Debbie reaches the top of the hill

As one would expect, given the course profile, Heather found the Marathon very tough going with all the hills and rugged trails. She found herself jostling for position with Anne Connell who was also in the Vet Women 60+ category and there was very little to choose between them.

It was chip timing though and they’d all been set off in groups to keep it COVID secure so there was no easy way of telling who was ahead. 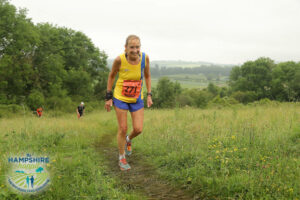 It turned out she’d just been pipped to the post by Anne Connell for the age category prize, with Anne finishing in 155th place in 4:30:12. There was only a minute and 21 seconds between the pair so after all that running it had been an extremely close call. 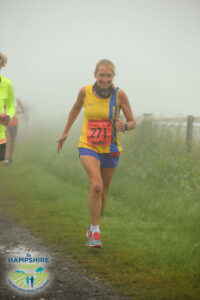 Heather completed the course in 4:31:33 which made her 30th placed female

Although it was a great course, Helen found the Half Marathon pretty hard having not done the distance for quite some time. She actually felt better in the second half of the race though as she wasn’t so worried about the distance by then.

She’d managed to run up all the hills until reaching the last one at 12.5 miles. At that point, she looked up and saw the line of vans parked at the top of ‘a Coombe’!

Surely they weren’t going up that far in the last half mile, she thought. It looked super steep. And it was!! The trajectory was such that her nose was only a couple of feet from the ground. 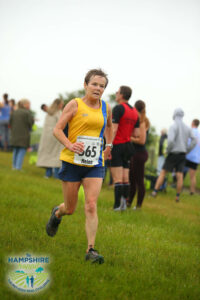 Helen completed the half marathon course in 2:19:43 which put her 6th in her age category

Considering there was so much uphill over the second half of the race, Debbie Lennon ran extremely well to finish in a time of 2 hours and 31 seconds.

That put her in 100th place overall and made her 22nd fastest female. It also put her 3rd out of 66 in the Vet Women 50-59 category which was a very pleasing result for Debbie. 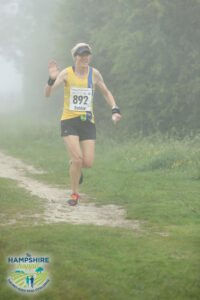 Debbie did well to get round in 2:00:31 which put her 3rd in her age category

Ken Parradine also ran well to complete the Half Marathon in exactly 2 hours 13 minutes, which put him in 199th place overall. In the Vet Men 60+ category, he was 15th out of 33.

Having experienced the course, Helen said she would love to do the event again when she’s fitter and has earmarked it as one to go back to. 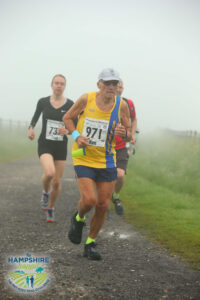 Heather said it felt good to back on the start line with a race number pinned to her vest again. It was also a special occasion as her friend Caroline Horder was running her 100th marathon that day.

In fact she finished 3rd in the Vet Women 60+ category in a time of 4:41:14, so it was a very successful day for the pair of them and certainly one to remember. 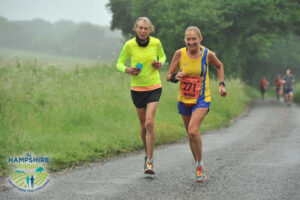 Each finisher at the Hampshire Hoppit was given a unique engraved glass which they got to keep along with a thirst quenching fill of ‘Hoppit’, a class ale from Loddon Brewery. For the marathon runners it was a full pint and for the half marathoners it was a half pint.

Heather, Helen and Ken will all be back in action this coming Sunday at the Puddletown Plod Half Marathon so it will be interesting to see how they go in a slightly easier road race setting. 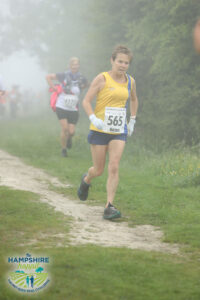 Helen would love to do the half marathon race again 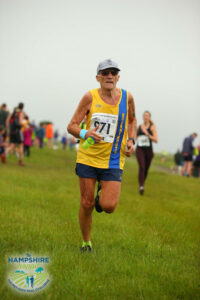 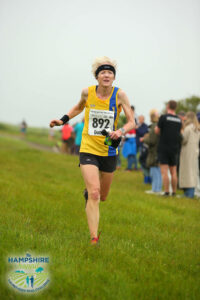 Debbie had every reason to be proud of her efforts 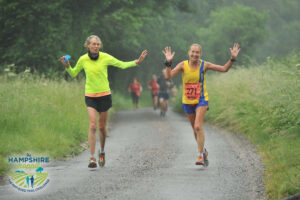 It was a day to remember for Caroline and Heather