Having completed 138 different marathons, you would have thought Heather Khoshnevis had been there, seen it and done it all, right?…. Well, you’d be wrong there. She hadn’t done one quite like the the Two Tunnels Marathon before.

As the name suggests, the Bath based route incorporates two tunnels, the first of which is the Devonshire Tunnel, which is 408 metres long. The second is the Combe Down Tunnel  which is 1672 metres long which actually makes it the foot race with the longest underground section in Britain.

There is then a stretch of about 7 miles along the canal, heading from the Somerset Coal Canal onto the Kennet & Avon Canal at Dundas Aqaduct, which is over 200 years old.

There were several long boats moored along the bank which were interesting to look at. They were old but very well looked after and there was even one called the Floating Baker which was selling cakes.

The route also included a jaunt past the house of the world renowned geologist William Smith who produced the first geological map of the country. It also heads along lane that was a track bed of the Bristol and North Somerset Railway, which then meets the Somerset and Dorset Line.

The canal eventually merges into the River Avon and the runners are taken onto a bridge over Lock Gate, which is the second deepest lock in the country. It is then heads along the river bank into the heart of Bath.

One of the aid stations was just by the world famous Pulteney Bridge and Weir at a spot which is overlooked by Bath Abbey. The aid stations were very impressive, containing an abundance of chocolates and sweets.

It’s a two lap route as well so after doing all that once, the marathon runners then get to experience it all again a second time, including going back through the tunnels.

The northern side of the Combe Down Tunnel is 50ft higher than the southern portal which sends a cool breeze circulating through the tunnels.

That created a chilling environment that felt quite eerie as you couldn’t even see your own feet or anyone in front of you. Every now and then you could feel drips of water on your head as well and it felt a bit like being in a scary ghost train at the fair.

Heather was trying to imagine what a complete marathon just going back and forth through the tunnels would be like and her weird mind told her that it could be quite fun, especially on a rainy day. 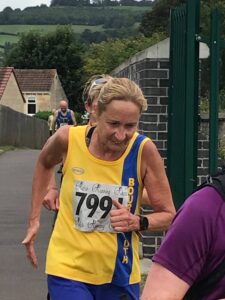 It wasn’t a fast course as the canal paths were quite narrow and busy in places but that enabled Heather to take the time check out the boats.

She’d actually entered the race before COVID and it had been pushed back so she wasn’t even sure if she was going to do it. It was only late in the afternoon on the day before the race that she made up her mind to go for it.

The race started on a hill and finished on a hill as well and featured plenty of other undulations along the way which made it challenging and forced Heather to work for it. 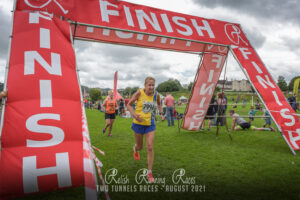 Completing the course in 4 hours 8 minutes and 15 seconds, Heather finished in 42nd place in the overall standings, out of 141 who successfully negotiated the distance. 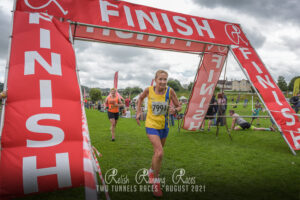 After only making the decision to do the race the day before, Heather was glad she did in end

That saw her pick up the category win in the Female 60-69 division which was a pleasing outcome for Heather and a nice little reward for her efforts. 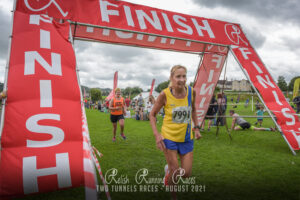 It was a very well organised race with a friendly atmosphere and Heather really enjoyed herself and had a lovely day out. Thus, she was very pleased she opted to go for it in the end. Plus it was another notch to add to her impressive marathon tally. 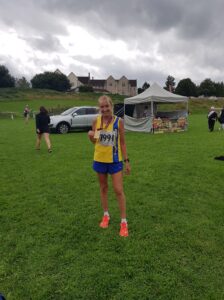