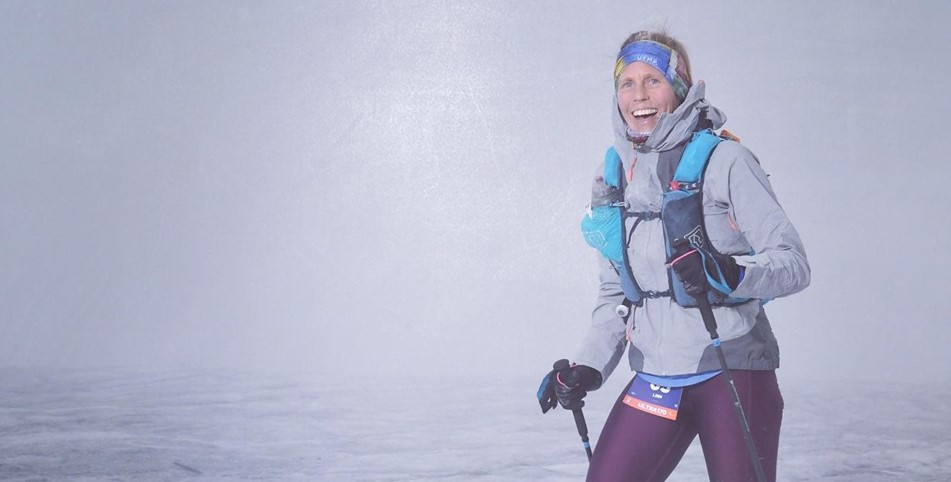 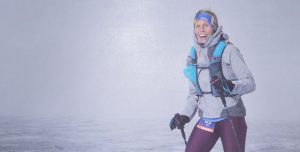 In what was set to be her biggest challenge to date, Linn Erixon Sahlström took s trip to the Swiss Alps for the 170km Ultra Tour Monte Rosa

As she got herself primed and ready for her next big adventure, Linn Erixon Sahlström felt that this one might well be her absolute biggest and toughest challenge so far. And that’s saying something!

She’s battled the Jurassic Coast 100-Miler twice, finishing as 1st female on both occasions. She’s conquered the 123km TDS race at the UTMB which incorporated 6,800 metres of elevation. Four months ago she took on the Ultra-Trail Snowdonia 50, which was the most technical and most demanding race she’d ever been involved in.

In the Ultra Tour Monte Rosa though, she’d found a task that she felt might just top all of those. The 170km course with 11,600m of ascent looked an extremely daunting prospect on the face of it.

Reaching altitudes of up to 3,200m, traversing a glacier, crossing the world’s longest suspension bridge… This race had it all and looked like it would prove to be a truly epic and memorable running experience for Linn.

Since she hadn’t had the luxury of being able to train in the mountains, Linn had been wearing a mask to simulate the high altitude she’d have to contend with in the Ultra Tour Monte Rosa.

Running in altitude is of course, notoriously much more difficult than at sea level. As you get higher up, the air becomes thinner and it becomes more difficult to get enough oxygen into the lungs.

Attempting a mountain race without having experienced this or trained for it in any way can have disastrous consequences. The mask enabled Linn to replicate the breathing difficulties she might encounter as she ascends the high peaks.

Even though she knew it would be difficult, Linn set off with every intention a completing the full 170km route and overcoming every mountainous climb she came into contact with. Not only that though, she planned to be competitive as well, which would mean being able to run strongly for the entire duration of the race.

To begin with, everything was going according to plan for Linn. She’d managed to stick to her pace and show plenty of grit on the inclines. She took it conservatively on the descents knowing that only a sensible and measured approach would see her through to the end in the sort of time she wanted. 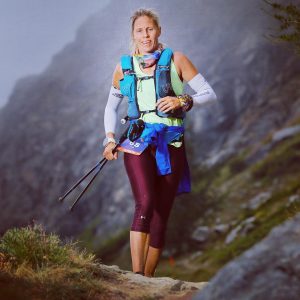 Linn was working hard in the first part of the race but at the same time, conserving energy for the journey ahead

She did struggle with her breathing at times which was to be expected at that altitude but as she approached the half way stage in the race, it was all going pretty well.

As far as Linn was concerned though, the race wouldn’t really start until she was 120km in. That was when she planned to make her move and start working her way up the field. Unfortunately though, she was to be denied that opportunity.

At the half way point of the race, Gressoney La Trinite, the Ultra Tour Monte Rosa came to an abrupt end, due to severe weather warnings. It was a tough call from the race organisers, with hundreds of participants having travelled from all over the world to take part. 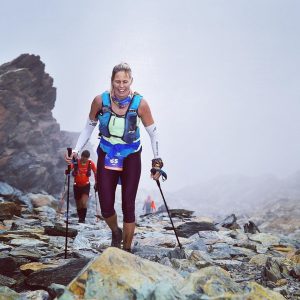 At the end of the day though, safety had to come first and continuing the race and putting all those athletes at risk would have been the wrong thing to do. The heavy snowfall that followed went some way toward confirming that the right decision had been made.

The results were then determined by the last checkpoint each competitor had made it to when the race was stopped and the time they got there in.

Although she’d taken it quite steadily over the course of the race thus far, Linn was still one of only five women who made it to Gressoney La Trenite. She arrived in a time of 17 hours 1 minute and 40 seconds, which put her in 5th place.

Although that was still a fantastic result for Linn in such a competitive field, it would have been interesting to see where she would have ended up had it gone the full distance. She wasn’t far behind Russian lady Maria Josephine Liao who was 4th in 16:54:50.

Then there was Sarah Hansel of the USA in 3rd place with a time of 16:18:44 and Lizzie Wrait of the UK who took 2nd in 16:09:33. Corine Kagerer of Switzerland had a seemingly unassailable lead though, reaching Gressoney in a time of 13:52:15. 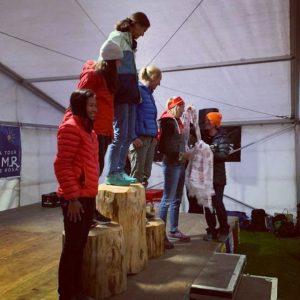 When all is said and done though, it was still a podium place for Linn so that was something to be proud of. Plus she’d completed 86km (53 miles) with 5,200m of elevation, which is no mean feat.

Unfortunately she never got to see the mystical, majestic Matterhorn which has a summit at 4,478m high making it one of the highest in Europe.

She did still experience some magical moments including manoeuvring across a glacier in her micro-spikes for the first time ever whilst a snowstorm flares up around her. She also heard the sounds of the horn-blowers in the middle of nowhere in the pitch black at 4:30am.

She also caught a glimpse of how truly beautiful and scenic this race can be as well as a taste of how brutal and unforgiving the climbs are. On this occasion though, she had been forced to concede defeat to the mountains.

Linn does have some sadness in her heart about not being able to explore the magical route around Monte Rosa in its entirety. She is, however, determined to return one day to complete the full distance and conquer second highest mountain in the Alps once and for all. 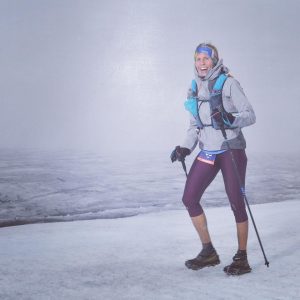