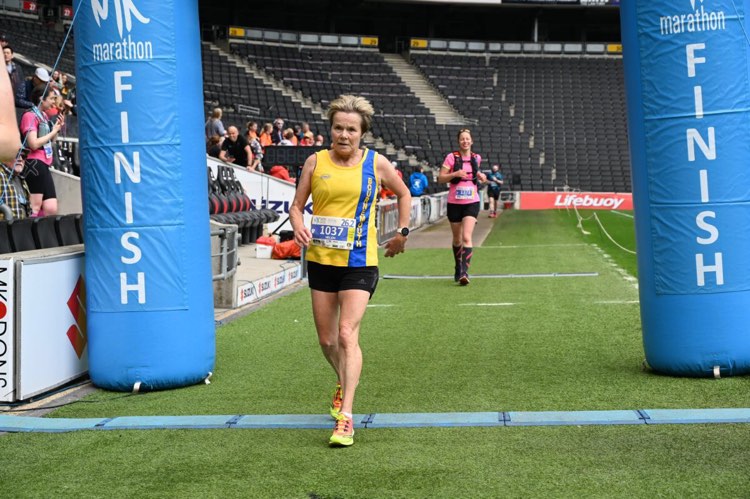 It’s not often that the opportunity arises to pull on that much coveted England vest and represent your country. And if that chance does come up, you need to grab it with both hands. That was exactly what Helen Ambrosen was hoping to do when she travelled up to Buckinghamshire for the Milton Keynes Marathon.

It was a qualifying race for the EA age group competition which will be played out at the Chester Marathon in October. To get her England vest though Helen had to finish in the top three of her age category and complete the course within the qualifying time for the 65 to 69 group, which was 4 hour 30 minutes. 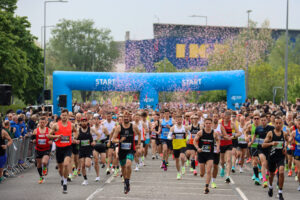 The 2022 MK Marathon gets underway

Helen’s original plan was to go along steadily at 9 minutes per mile but by the eight mile point she realised she wasn’t going to be able to do that. Thus, she would have to revert to plan B – which was simply just to finish it.

It was the week where the devastating news came out about the deaths of former Bournemouth AC legend John Boyes and his wife Katherine who were living over in France. The couple were much loved and well revered by all at BAC who had been around long enough to remember them.

It was so unexpected and so sudden that it literally sent shockwaves through the heart of the club. People just couldn’t quite seem to get their heads around it.

As well as being so highly regarded and well respected, John was also an absolutely phenomenal runner and still sits third on the BAC all-time marathon bests list with his time of 2:13:20 that he set in Maassluis, Holland, in 1985.

Helen knew the couple well and after receiving the tragic news, she wasn’t in the right frame of mind to run a marathon and felt emotionally drained. She knew in her heart though that John would have said to her “C’mon – we are going!!”

Some of the long time members, including Helen, had been over to France to race with John and they would have no doubt heard him say that. Hence, she pulled herself together and went to do the event in their memory. 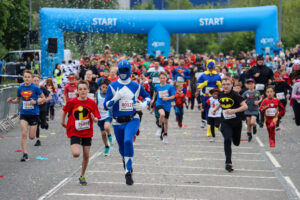 After eight miles though, Helen felt awful and she stopped to walk for a bit. She managed to get going again though but was down to 9 and a half minutes per mile. Then at 15 miles she stopped to walk again and was a bit stop start for the next mile or so.

At 18 miles she tagged onto the back of the 4:15 pacer who was really great and helped her find her rhythm again. She lost that group going up a road bridge on the 23rd mile and struggled through the last few miles.

The race finished at Stadium MK, home to the MK Dons, and Helen made it to the line in a time of 4 hours 20 minutes and 50 seconds. That put her in 776th place overall out of 1,352 who successfully completed the race.

Out of the females in the race, she was 147th of 365. Crucially though, she was 2nd in the vet female 65+ category and, despite her woes, had achieved the qualifying time for Chester. So from that perspective, it was job done for Helen. 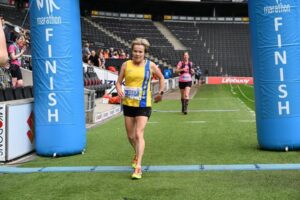 Adam Holland finished in 8th place in a time of 2:42:22 before he went on to complete his challenge of running 10 sub three hour marathons in 10 consecutive days at Lake Windermere.

Georgina Povall of Egdon Heath Harriers had a brilliant run to finish as 1st female and 43rd overall with her time of 2:57:46. The next woman over the line was Bethany Thompson of Mornington Chasers who finished in 3:01:40 to take 62nd place in the overall standings. A sweet run from Catherine Kandie put her on the podium as 3rd female, completing the course in 3 hours and 2 minutes.

Although the race didn’t go according to plan, she had the intestinal fortitude to see it through to the end and still achieve her ultimate goal. With the pain she was going through, both mentally and physically, it took tremendous character to do that so Helen deserves huge plaudits for her plight. Her attitude remains positive though and she is already looking to the future and hoping for a much better run next time.