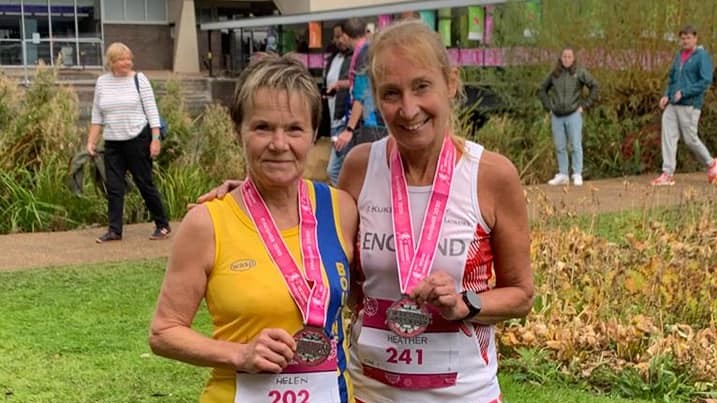 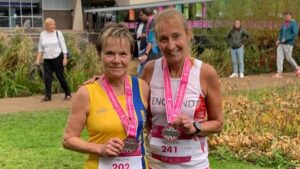 Turns out it isn’t just puddings, tea and serial killers that Yorkshire is good at. The county is also pretty useful at staging marathons too it would seem, as Heather Khoshnevis and Helen Ambrosen can now vouch for.

Whilst it may have been dragged through the mud recently over the racist abuse scandal in cricket, the Yorkshire Marathon Festival portrayed the county in a very good light and showed that it can be a place where everyone comes together to create something special.

Bournemouth AC coach Tom Craggs was up there performing his role as head honcho at England Athletics and he was in charge of an EA Masters team that consisted of some of the country’s top vets in their respective categories.

That included Bournemouth AC’s very own Heather Khoshnevis who took the well earned opportunity to pull on an England Athletics vest.

It wasn’t really surprising Heather was selected to represent England Athletics since she virtually always wins her category prize in whatever races she does.

Heather had certainly done her fair share of recent marathons including London, and the week before that, the New Forest Marathon.

She’d also done a few over the summer as well including the Two Tunnels Marathon in Bath, the Hampshire Hoppit and Kempton Park Marathon. The Yorkshire Marathon would be the 142nd of her ever growing tally.

It was also a designated British Masters Athletics Federation race which meant there were age group medals up for grabs in that competition, as well as for the race itself.

That was enough to lure Helen Ambrosen to the table and she also made the journey up from the south coast to get a taste of the action up north.

Helen has really thrown herself into the BMAF races this season and she’s been getting the results to show for it. She finds that the extra bit of added motivation to do well can make a huge difference.

She has an illustrious history with the BMAF marathons as well, winning the W50 medal when she ran a lifetime best of 3:18 at the age of 54!! She also has the W55 medal but missed out on the W60 one.

Now she was after the W65 one and she was determined to get it. With the level of training she’d put in she felt she had it within her capability to run steadily at 9 minutes per mile which would get her round in under four hours.

Helen had certainly been putting the mileage in in training and had completed the New Forest Marathon three weeks before as her last long run so she certainly wasn’t going into the Yorkshire Marathon unprepared.

The race started at the University Campus and there was a shuttle bus put on take the runners over there. It was a smoothly done and very well organised event.

It was an undulating course, heading out to a few villages before going back into the city centre. The route even goes past York Minster, although Heather somehow managed to miss that. She must have been so focused on her running. 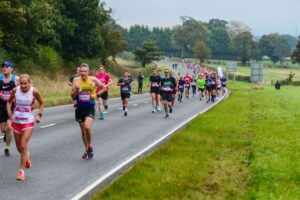 Going through the first 10k in 47 minutes, she then hit the half way point in 1 hour 43 minutes. She toughed it out well over the second half the race despite a niggly foot issue that effected her over the last 10 miles. 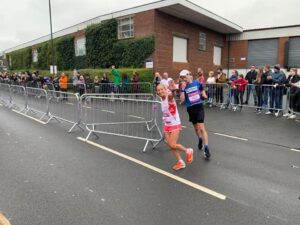 Heather gives a wave as she reaches the hairpin turn

Finishing in a time of 3 hours 42 minutes and 26 seconds, Heather finished 671st overall and was 86th placed female. It was a terrific run and was enough to seal the gold medal for her age group in the British Masters as well as gold for the England Athletics Masters team. And for the race itself she was 2nd in her age category. 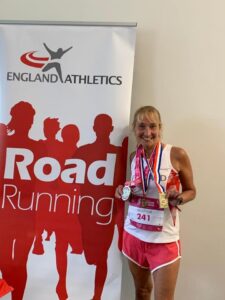 It was a fantastic result for Heather and one that was very well deserved after all the hard work she puts in. And with all the bling she’d received, it certainly wasn’t going to be one that she’ll forget any time soon. 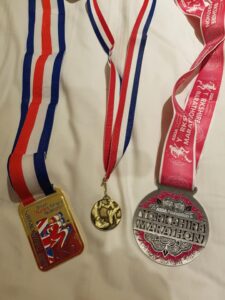 Helen went through the 10k point in 54:29 and went on to reach the half way point in 1:57:29. At that stage she was looking good for a sub-four provided she could maintain the pace over the second half.

Her splits were very consistent and it was only really over the last 5k that she dropped off a bit with a few tough little inclines towards the end.

Getting to the line in 3:58:47, it was a magnificent run from Helen and in the end she was quite comfortably under the four hour target she’d set herself. 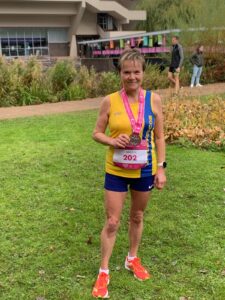 That put her in 1,074th place overall and she was 176th fastest female. It was enough to secure the age category win for the race itself and also take home the gold medal she wanted for the BMAF. 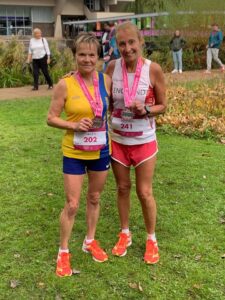 It was another marathon done and dusted for Helen and Heather

The two Bournemouth AC ladies had really excelled in the race and showed that it doesn’t matter age you are. If you put the work in and have the right attitude and dedication, success will come your way. And Heather and Helen had certainly done both themselves and their club proud in that respect. 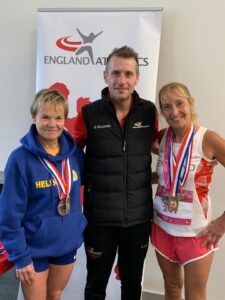 York is a marvellous city with so much history and since it was quite a long journey, Heather and Helen went a few days earlier to explore.

One of the greatest advantages of running marathons is you get to visit places that you otherwise may not go to. After all, what better way of sightseeing is there than running a marathon?