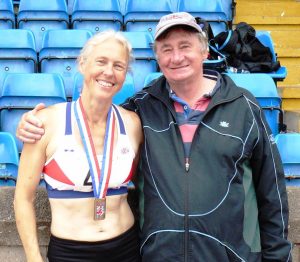 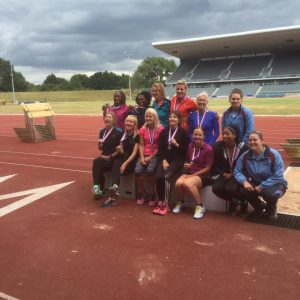 There was considerable BAC involvement, and success, at the CAU Inter-County Championship at Bedford over the weekend.  Phoebe Dowson, home from university in the USA for the summer, won a bronze medal for her 50.66 throw in the Senior Women 1k Discus Championship – this season Phoebe has been gradually approaching her 2014 PB of 51.12, so a new PB is surely on the cards.  In the Senior Men Long Jump Championship, James Lelliott was 7th with his leap of 7.12, and Rob Woolgar 10th with 6.77.  In the same competition, Bradley Pickup, not at present BAC, but coached by Zac Kerin, won the bronze medal with his jump of 7.50, an excellent result for an athlete returning from injury.  Also at Birmingham, competing in the ‘Paralympic’ Senior Men Long Jump Championship, was Luke Sinnott, whose distance was 5.46, a PB and third in the competition.  Luke was the only veteran (V35) taking part.  Almost six years ago, whilst serving with the British Army in Afghanistan, Luke became the victim of an improvised explosive device, resulting in the amputation of both legs above the knee, and the near loss of one arm, which fortunately was saved by the skill of the army surgeons.  Luke has grasped hold of life following this incident, and, amongst other activities, is often seen at the Kings Park track being coached by Brian Camp. 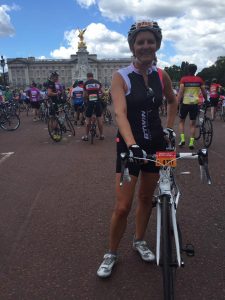 Away from athletics, on Sunday 31 July, Caroline Rowley was amongst the 27,000 cyclists who took part in the RideLondon-Surrey cycle event.  Caroline managed to avoid the various incidents which resulted in a delayed start to the ‘professional’ race, to complete the course in 5.27.  Only a short rest before the next Dorset Road Race League race!