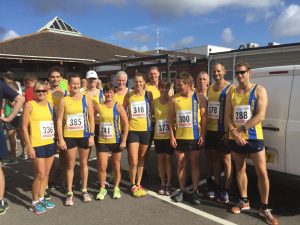 Just some of the BAC squad at the Hoburne 5

Fixture clashes meant that, on Sunday 25 September, BAC‘s strength was divided between the two ‘team’ fixtures on the day, the Hoburne 5, a DRRL race, and the SEAA Road Relays, in which the club fielded a Senior Mens’ team for the first time for a number of years, with, not only these two races, but also a number of others in which athletes were pursuing their own individual goals.

The Hoburne 5 (mile) race was the 9th of the twelve races which make up the Dorset Road Race League for 2016, and BAC‘s hold on the defence of the Mens’ and the Ladies’ championship title is tenuous, so a good result was important.  In view of the number of fixtures, it is very pleasing to report that no fewer than 15 BAC athletes ran at Hoburne, with (subject to confirmation) the Ladies scoring yet another DRRL win, and the Men achieving a third position, leaving the League Championship titles within reach, but, for both the Men and the Ladies, probably requiring two wins from the remaining three fixtures (Gold Hill 10k 9 October, Wimborne 10 20 November, Boscombe 10k 27 November).  A feature of the Mens’ team result was the contribution of the club’s recent signings – and the continuing resurgence of BAC legend, Mark Hargreaves!  Alex Goulding, 6th in the race, Marcus O’Toole, 16th, and Richard Brawn, 38th, have all joined up very recently, and Mark finished 10th, expressing himself disappointed in clocking 10 seconds slower than the Littledown 5 last week – could a less than a PB course, the wind and some hills have had something to do with this!  Jud Kirk, crossing the line two seconds after Richard, completed the Mens’ DRRL team.  Congratulations to Emma Dews, who was the winner of the Ladies’ race (and, of course, was first Lady veteran), in a storming run which resulted in an 18th overall position.  Nikki Sandell and Yvonne Tibble completed the Ladies’ DRRL team – comfortably winning the League competition on the day.  Joy Wright and Louise Price provided the all important reserve.  Please see below for the full BAC results in the Hoburne 5 and photographs.

Meanwhile, at the Bedford Autodrome, about ten miles north of Bedford itself, a BAC Senior Mens’ team competed in the SEAA 6 Stage Road Relay, moved this year from Aldershot as a result of booking difficulties at the Rushmoor Arena, the home of the relays since 1988.  The course was completely different from the Aldershot course, consisting of one long loop around a motor car race track, taking competitors well away from the administrative, tented, etc., area, resulting in very little support, which, coupled with a very strong wind blowing unchecked across the hilltop site, made running each leg of the relay a somewhat lonely business.  BAC fielded a strong team of five, unfortunately supported by an ageing ‘has-been’ who would, but for a few months, have qualified for a V70 team had such a thing existed!  Rob McTaggart ran well on the first leg (the 43rd fastest leg – of a total of 380 – of the day) taking the team to 19th of the 57 complete teams who would eventually finish.  Rob handed over to Toby Chapman, who also ran well, dropping only three places.  There were good runs also from Max Catterall and Tom Paskins, but the quality of this event is such that places were inevitably dropped, with Josh Cole recovering some so that when Josh handed over to Ian Graham for the ‘glory leg’ BAC were 36th.  Unfortunately, the last leg was not so glorious, with BAC finishing the end of the competition in 50th place.  But – we were there!!  Hopefully next year BAC can return to its practice of not that long ago of fielding a strong complete Senior Mens’ team, as the club is well capable of doing, on occasions finishing in the top 25 and qualifying for the National Road Relay competition.  But congratulations to Rob, Toby, Max, Tom and Josh, whose efforts could have resulted in this with a strong last leg, and, although Ian‘s time was the slowest of the Senior Men who were part of full teams (there were seven slower Senior Men who were not part of full teams), if his time had been amongst the V60 times, rather than the Senior Mens’ times, it would have looked much more favourable!  Each leg was a little short of 6k, and BAC‘s times were: Rob 18.14; Toby 19.15; Max 21.37; Tom 22.08; Josh 20.02; Ian 26.23.

Whilst mentioning Rob McTaggart, one race which fell under the radar was the Richmond Half Marathon on 18 September, which Rob won.  Rob was the first of 2314 finishers in a highly creditable time of 1.11.56.

Back to 25 September, Anthony Clark was the winner of the Black Hill 10k, a trail run based at Bere Regis, part of the Purbeck Trail Series, in a time of 40.57, a minute clear of the second athlete to finish.  Anthony was the first of 190 finishers.

Also on the 25 September, in addition to the Hoburne 5 and the SEAA Road Relay, BAC athletes were competing in Bristol, Winchester, and, further afield, Berlin. 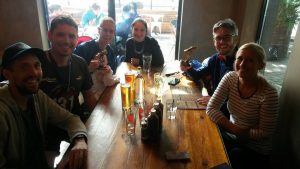 In the Great Bristol Half Marathon, Peter Thompson ran extremely well to finish 11th in 1.12.54, and, not that much further behind, was Billy McGreevy, 66th in 1.20.58.  The results show that that there were 1500 finishers, but there must have been many more, as the 1500th athlete completed the course in 1.48.01 – if everyone who started this race finished in less than 1.48.02 this half marathon is quite unique!  Meanwhile, new signing Tamzin Petersen was taking on the Winchester Half Marathon.  Tamzin finished 435th of a total field of 1256, in a time of 1.53.45.   A much bigger field of 26807 completed the Berlin Marathon, amongst which was Caroline Rowley, 1405th in 3.48.05.  This was Caroline‘s 3rd World Major Marathon, describing it as “a most amazing experience”, and clearly very emotional, bringing tears to Caroline‘s eyes “for the first time ever”.  Well done Caroline, and we look forward to seeing your smile back at training very soon! 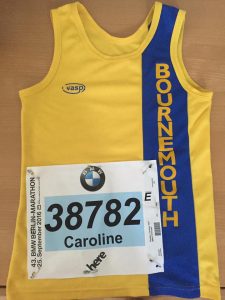 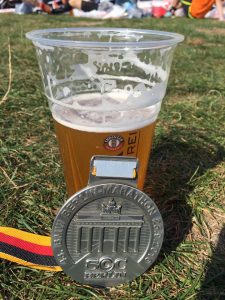 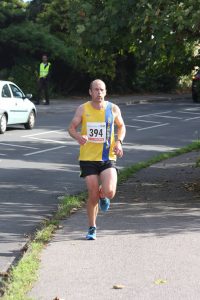 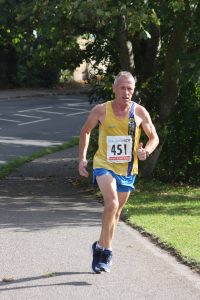 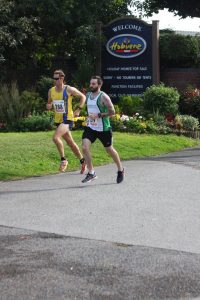 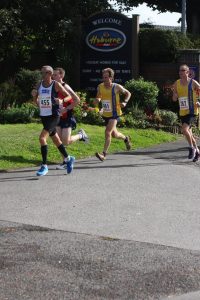 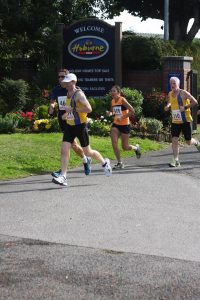 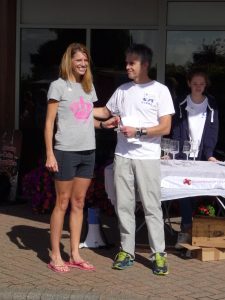 Emma Dews is awarded the prize for 1st lady 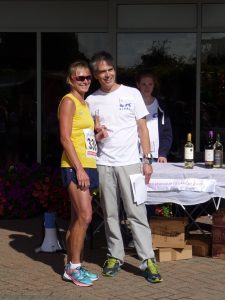 Yvonne Tibble is the winner of her age category

Just some of the BAC squad at the Hoburne 5