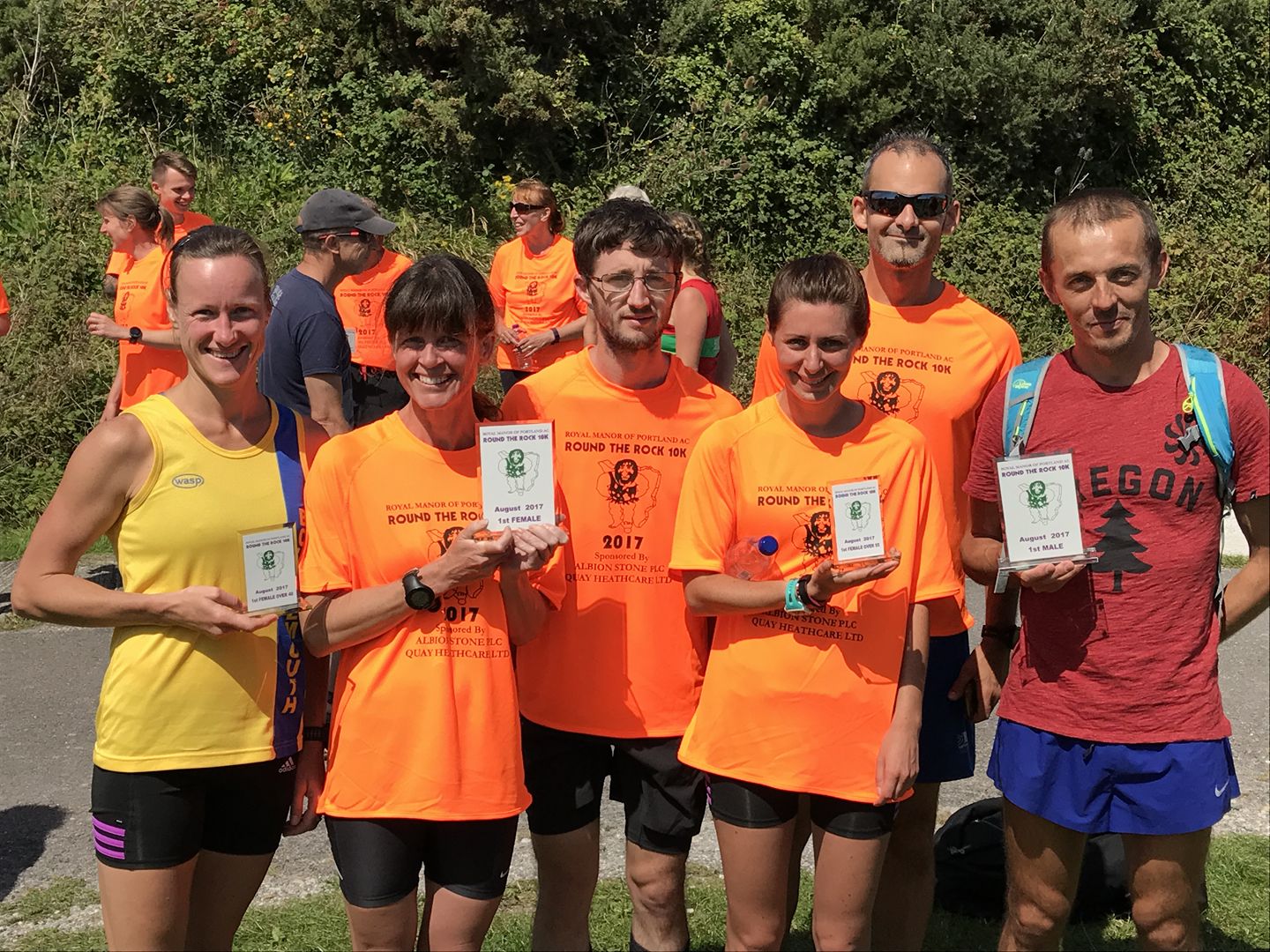 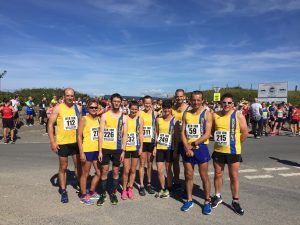 For the next Dorset Road Race League fixture in the season, it was a return to Portland for Team BAC as they  took on the Round the Rock 10k. Many of the Bournemouth AC team were familiar with parts of the route from their previous outing in the Portland 10 mile race last month.

With a strong ladies team out and a semi-strong mens team, captain Rich Nelson had reason to be optimistic that the race would go well. And as it turned out, they couldn’t really have gone much better. 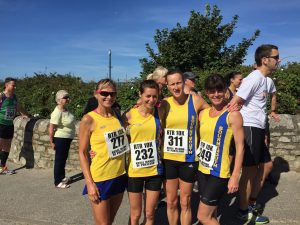 One man who was pleased to be back in Portland was Jacek Cieluszecki. After coasting to very comfortable victory in the Portland 10, Jacek knew there was a high chance he would repeat his heroics again in the Round the Rock 10k. And sure enough, he did not disappoint.

Once again, Jacek was first over the line, completing the undulating 10k route in a blistering time of 32 minutes and 59 seconds. The first half of the race was mostly either on the flat or downhill. 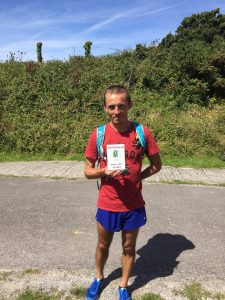 Jacek set off quickly, just as he did in the Portland 10 but this time Daniel Mulryan of Poole Runners went with him. The pair were still neck-and-neck up to the 5k point of the race but once they hit the hills, Jacek began to pull away. 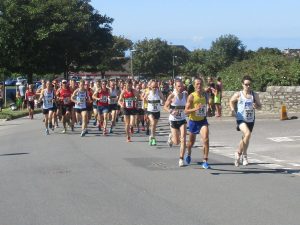 There are few who can match Jacek’s pace on an incline as his recent exploits in the Eigar 51 mountain trail ultra showed. The second half of the race featured a fair few inclines, which is the kind of profile the Jacek revels in and he was able to accelerate up the slopes and seal another superb win. By the end Jacek had opened up a lead of over a minute on Daniel, who finished in 2nd place. 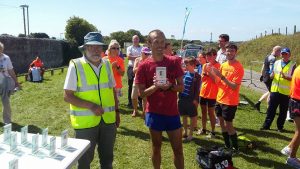 Jacek picks up his trophy for a another brilliant race win

Alex Goulding also had a good run, finishing in 7th place with a time of 36:36, which put him second in the V40 category. It was a good return to form for Alex who had had a couple of races recently where he hadn’t been entirely happy with the outcome, including the Portland 10. 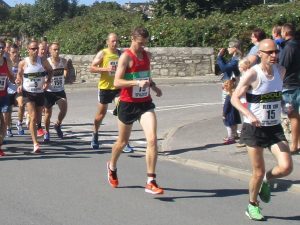 Alex Goulding ran well to finish in 7th place in a time of 36:36

Alex managed the race well, resisting the temptation to go off too quickly from the start and was able to maintain his pace as the race went on, saving enough energy to power up the inclines of the second 5k.

Tom Paskins continued his great form of late, finishing in 12th place in a time of 37:43. Tom had set himself the target of under 38 minutes prior to the race so he was satisfied with the end result. 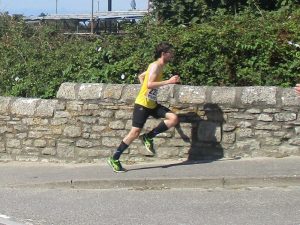 Tom Paskins is has been flourishing in hilly races of late, posting a very quick time of 37:43 to take 12th place

Another BAC member who was happy with the end result was Nikki Sandell. Nikki was leading the women’s race from the outset and despite a challenge from Vicki Ingham of Poole Runners, she was able to maintain her advantage throughout to seal a magnificent win. 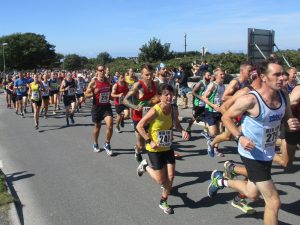 Vicki had been close behind Nikki at around the 5k point in the race, but Nikki demonstrated great strength and will on the uphill sectors resulting in her pulling away to seize another trophy for BAC. Nikki’s finishing time was 40:57. 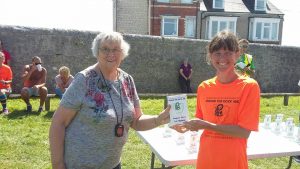 Nikki picks up her prize for finishing as the leading lady

Richard Brawn had been watching this battle for supremecy evolve in front of him,  as he made his way along the course. Richard had been up with Nikki toward the beginning of the race and was considering trying to hang onto her coattails but he didn’t want to risk putting himself into the red. Instead he settled into a more comfortable pace for the remainder of the first 5k and conserved his energy for the more challenging second half of the race.

This tactic seemed to work as Richard felt strong going up the hills and was able to reel in a few of those who were ahead of him soon after the inclines started. As he got to the top of the final climb Richard still felt he had more left in the tank and went past a couple of others, including Vicki Ingham. 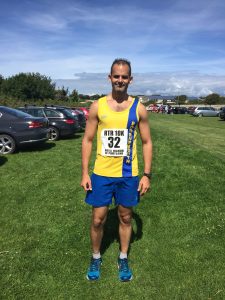 Richard Brawn finished strongly to record an impressive time of 41:29

There was a long also a long downhill stretch toward the beginning of the race which Richard enjoyed powering down, taking another couple of places before seeing out the final few turns and crossing the line in 35th place. He was fairly pleased with his time of 41:29.

Taking up a late entry into the race, Joy Wright turned her attention to the road, having been mostly concentrating on the track this season. Joy had a pretty strong run finishing as 4th placed woman and 62nd overall in a time of 45:02. Since Nikki had collected the trophy for the overall winner, that meant that Joy was able to claim the prize for first V40. 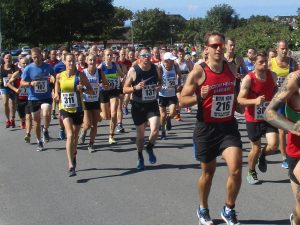 Another BAC member to scoop a category prize was Yvonne Tibble who took the accolade for first female V55. Yvonne was the 7th lady over the line and came 74th overall in a time of 46:25.

BAC team captain Rich Nelson was close to Yvonne throughout the whole race and did overtake her on one of the hills but in the end Yvonne came back to finish one place ahead of Rich who was 75th in a time of 46:42. 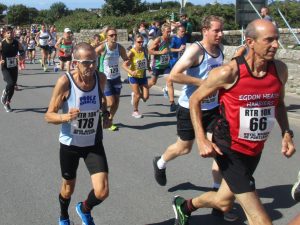 After only arriving back from a break in France late the previous evening night, Rich had been hoping one of the speedier men of the BAC group would come forward and take up his entry. Despite all his efforts to make that happen though, no one seemed to be available and Rich was forced to run the race as the 5th team scorer.

There was a further development that added Rich’s frustrations when, shortly after arriving at the race location, he discovered there was a nail and his tyre and the air was seeping out fast. Rich contacted the breakdown company and had no option but to take his mobile with him as he went out on the run so they could contact him when they arrived in order to replace the tyre.

This meant Rich had to stop at one point to take the call which was less than ideal. Soon after the race the breakdown recovery vehicle arrived and sorted the tyre so Rich and the BAC crew that had travelled with him were able to get home okay.

The final scorer for the ladies team was Tamzin Petersen who finished 11th placed woman and 86th overall with a time of 47:59. Tamzin hadn’t featured in the Portland 10 race so wasn’t fully aware of how tough the Portland hills can be. She set of quite quickly, making light work of the first 5k, but began to suffer a bit in the second half of the race, finding it difficult to maintain the pace once the inclines kicked in. It was still a good training run for Tamzin though as she completed her third race in consecutive weeks.

In terms of the team competition, BAC ladies would have got the league points for winning the women’s race, as they usually tend to. As for the men’s team points, it would appear that Poole AC may have claimed that. This was frustrating for Rich and the rest of the BAC team as if they’d had one more of the faster men they probably would have been victorious. That would have been a huge help in the DRRL standings but sadly it was not be. It was still a very strong performance from all those who did manage to make it and they can be proud of their efforts. 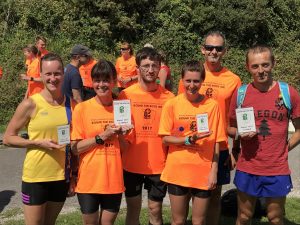