Jacek Cieluszecki rocks up for the Scafell Pike Trail Marathon 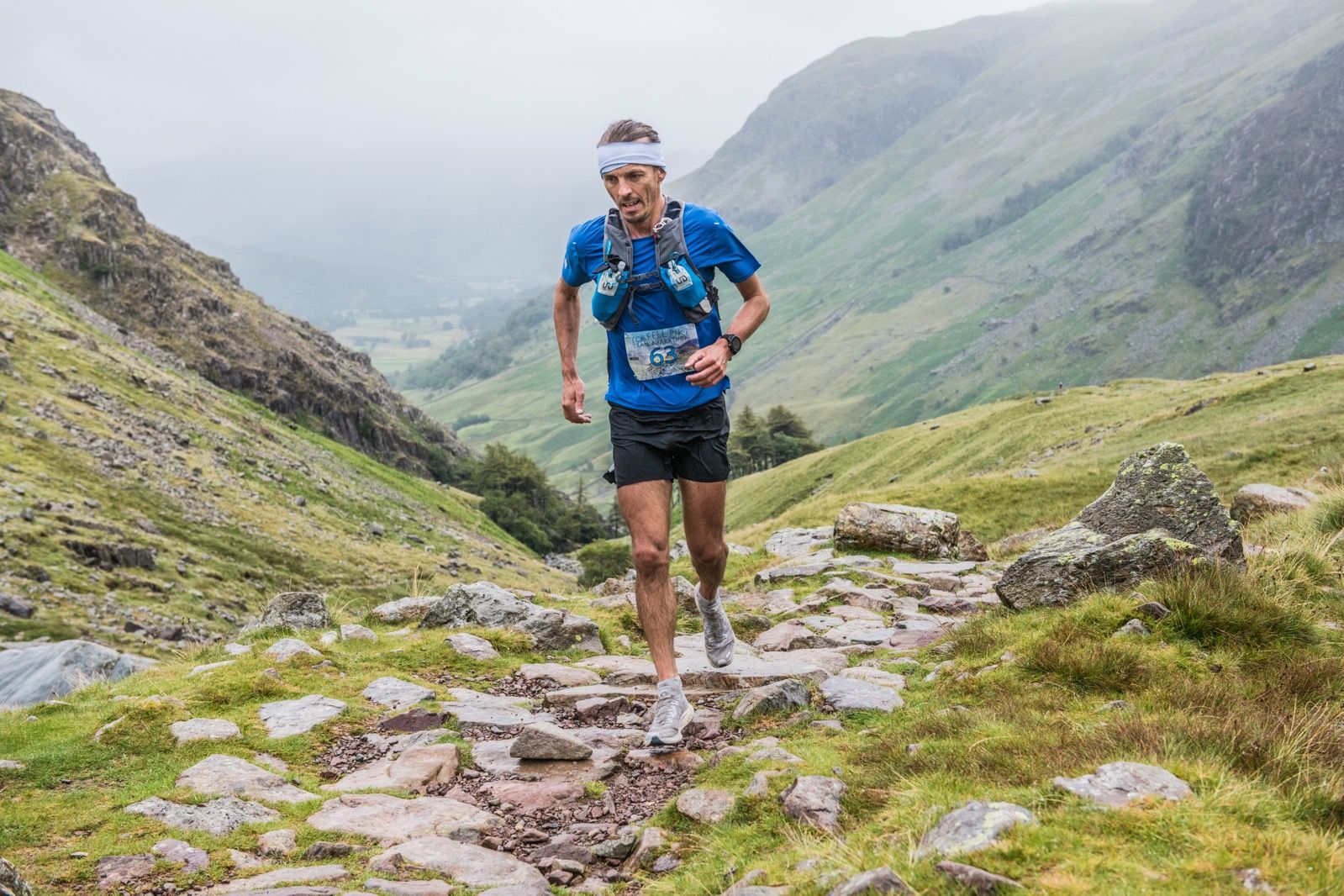 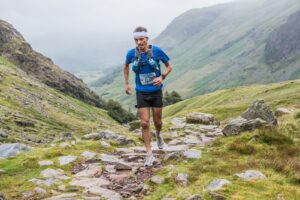 Usually in a super tough, long distance trail race you would make Jacek Cieluszecki favourite for the win. In fact, he’s won his last five races now including the Maverick Chilterns ‘Middle’ distance, the Maverick Exmoor Ultra and the Maverick Dorset ‘Long’ race.

Then before that he won the CTS Exmoor Ultra and the Exmoor Coast 55k, setting a course record in both races. They both incorporated a huge elevation gain of around 7,000ft.

The Scafell Pike Trail Marathon was a slightly different prospect though in that it was one where fully focused fell runners would have the upper hand.

Carrying out the bulk of his training over the Purbeck, JC is well accustomed to powering his way up a hefty slope or two and speeding back down a muddy or stony track. But the terrain at Scafell Pike is much more extreme.

The surfaces are very rocky and uneven and can become very slippery when wet. Plus the gradients are on a different scale than anything you are likely to encounter over the Purbeck.

That said, looking at the results from the previous years going, Jacek felt he should be well capable of claiming victory if he performs to his best.

This year though the Scafell Pike Trail Marathon was included as part of the Golden Trail National Series, along with three other races across England, Scotland and Wales.

That meant it could attract a higher standard of competition, with potentially some of the top national and international trail runners vying for the chance to compete in the GTNS Grand Finale in the Azores Islands.

And not only that. It was also announced as a selection race for the World Mountain and Trail Championships 40km trail race, so the stakes were extremely high in that respect. As Jacek was about to find out, he was really going to have his work cut out to compete for a high placing on this occasion.

The route incorporated England’s highest peak and featured 1,800 metres of ascent over the 27 mile distance. With the rocky terrain prominent throughout, it really was some next level stuff in terms of difficulty and intricacy. 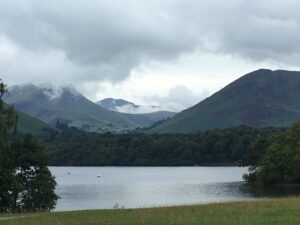 The course heads from Keswick along lakeshore trails, wooded valleys and spectacular high mountain trails including some of the most dramatic rock scenery in the Lake District. In  fact, Borrowdale has been described as the most beautiful valley in England and a trail runner’s paradise.

The first section runs to Seathwaite, following some woodland trails alongside the shores of Derwentwater and onto the village of Grange. Then it’s onto the first climb of the day going past Castle Crag. Then it’s through Seatroller to the hamlet of Seathwaite.

The second section takes the runners up to the summit of Scafell Pike, crossing the old packhorse bridge over Stockley Beck. Then it’s a very steep climb to Styhead Tarn and Skyhead Pass. After that it’s an ascent up the infamous Corridor Route, with it’s rocky trails and rugged yet spectacularly scenic landscape.

The route then descends to Broad Crag col before continuing its high level traverse past Broad Crag and Ill Crag towards Esk House. Then it’s on past Sprinkling Tarn to Styhead Pass before retracing the route back to Seathwaite.

From there it’s then a case of heading back to Keswick, with a final testing ascent from Rosthwaite to the isolated hamlet of Watendlath. Following the trail alongside Watendlath Beck it then reaches the final checkpoint before descending past Suprise View and Ashness Bridge.

It’s then onto a single-track trail below Falcon Crag and into Great Wood, with the last stretch long the lakeshore trails to the finish in Crow Park. 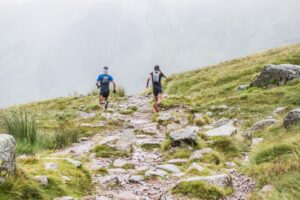 It was raining on the day which made it that much tougher to negotiate the tricky trails and sharp descents. Visibility was poor as well, meaning the spectacular views were somewhat diminished and more importantly, when you got near to the top of the mountain it was difficult to see where you were going.

In fact, there was one point where Jacek reached the top of the summit but because the visibility was so poor had had no idea which route he should take to get back down and couldn’t see very far along any of the trails.

Luckily just at the moment he got caught by Eleanor Davis of Preston Harriers who was first female at that point. She seemed to know where she was going so was able to find the correct path, which in turn enabled JC to stay on track. 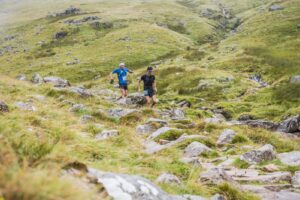 Jacek carefully negotiates his way down the rocky landscape

Since it was a selection race for the the World Mountain and Trail Championships some of the runners there were very experienced and skilled fell runners, including the likes of Ricky Lightfoot and Tom Adams.

As he wasn’t such an experienced fell runner, it was very difficult for Jacek on the descents, especially in the wet conditions. He was having to be cautious about where he was treading to ensure he stayed upright on the sharp downhill sections.

That was where the difference between him and the top fell runners was most evident. That were flying down the slopes at top speed, attacking them with courage and confidence. 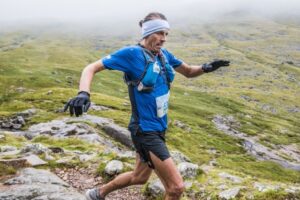 Some of the descents were treacherous, particularly since it had been raining

Once they were on the steep descents, Eleanor began to extend away from Jacek and there was nothing he could do about it. She was clearly a very accustomed fell runner and was able to build a very quick momentum as she went down.

Once he got to the bottom of the mountain, JC was able to pick up the pace for the remaining 12 miles or so and managed to gain a couple of places between the last checkpoint and the finish.

Completing the course in a time of 4 hours 14 minutes and 2 seconds, Jacek took 12th position in the overall standings out of the 239 runners who started the race.

Considering his lack of fell running experience compared to many of the others he was up against, that was a decent result for JC. It was enough to see him finish 1st in the 40-49 category as well. During the course of the run he’d amassed over 5,000 feet of ascent.

Tom Adams picked up the win, getting round in a tremendous time of 3 hours 32 minutes and 29 seconds. That gave him a 2-and-a-half minute margin of victory over Andrew Douglas of Inverclyde AC who was 2nd in 3:35:01. 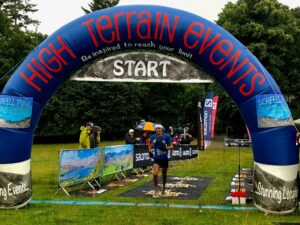 The woman who was with Jacek at the summit, Eleanor Davis, finished very strongly and ended up in 9th place overall in a time of 4:08:12 and that saw her claim the prize for 1st female.

Nichola Jackson of Keswick AC was 2nd female, finishing 14th overall in a time of 4:18:40. Then it was Georgia Tindley of Merrell finishing as 3rd female in a time of 4:24:19, putting her in 16th place overall.

Already having lined up his next fell race, JC will be competing in the CapTen in September in Bridport in a race that includes the daunting climb of Golden Cap, incorporating 2,400 feet of ascent over the 10 mile duration.

Then after that he heads up to Scotland for the Saloman Mamores VK, a race where the participants will gain 1000 metres of elevation over a distance of under 5 kilometres.  Hence why it’s called the Vertical Kilometre.

The terrain for that race is extremely rocky so the experience gained from the Scafell Pike Trail Marathon should stand JC in good stead for the challenge ahead.