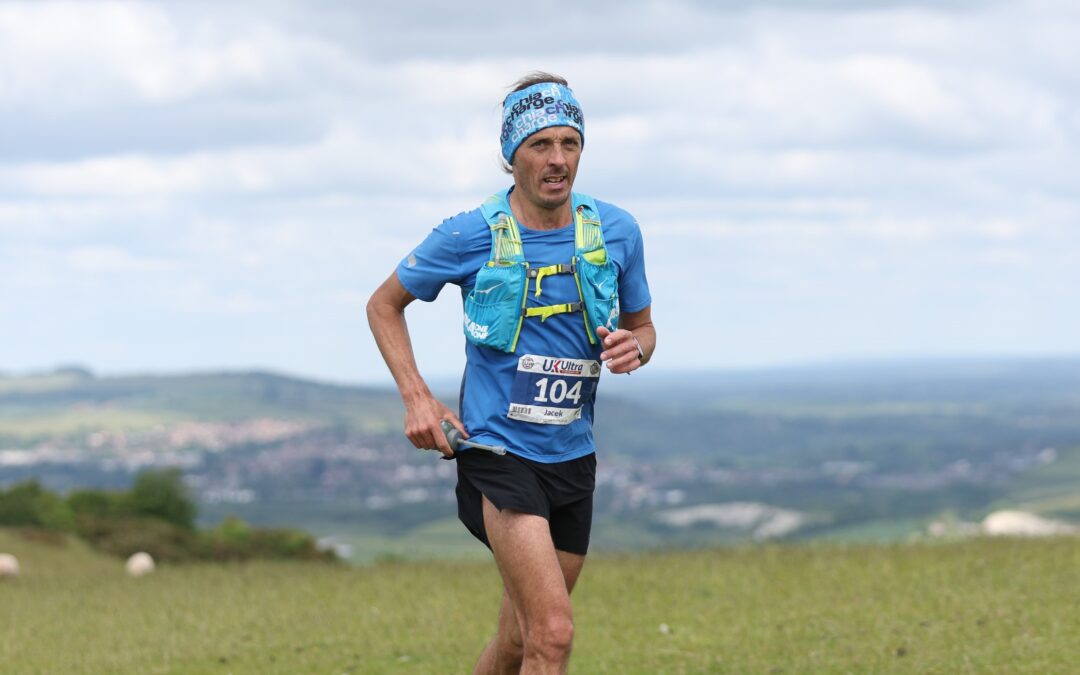 Unafraid to step into the most challenging of settings for the most brutal and hardcore races out there, Jacek Cieluszecki‘s A-race for the spring was the UK Ultra South Downs 100k. And for anyone who hasn’t experienced the formidable landscape of the South Downs Way, it is one of the toughest stretches of coastline in the British Isles.

It was a point to point trail race from Arundel in West Sussex, all the way through to Eastbourne, finishing over the famous white chalk cliffs of Beachy Head. Incorporating 8,000ft of climbing along the way, it is certainly not a race to be taken lightly. Even for an incredible athlete like JC, it was going to be a hell of an exertion.

It wasn’t his first ever 100k race though. He had done the distance before and been successful at it, as he is at most forms of running he tried his hand at. In the summer of 2019 he completed the Jurassic Coast 100k, winning the race in 10 hours and 46 minutes. For that one he had a 52 minute margin of victory over his nearest competitor.

On three previous occasions he’d competed in the Bieg 7 Dolin 100k in Poland, with his last attempt being in 2018. The race quantified as the Polish National Championships for the distance so he was up against the cream of the crop. After a shaky start which included a couple of falls, he managed to claw his way up through the field to finish in 8th place in 9 hours 45 minutes.

He was 2nd V40 that day in a race that incorporated some of Poland’s highest peaks and many of the runners he was competed against were sponsored athletes. They were representing for the likes of Salco Garmin, Hoka, Mizuno and Salomon.

The weekend before the UK Ultra South Downs 100k, JC competed in The Bosun – a very hilly race that was just over 10km and took place on the South West Coast Path. He was victorious in that race with an advantage of almost two-and-a-half minutes over his nearest rival. It was a good little sharpener for the mammoth run that was to come.

Jacek wasn’t going to the South Downs 100k on his own though. He had his wife Ela there with him but she wasn’t there to support him. She was there to run it as well, just as she did in the Jurassic Coast 100k. She also ran the North Coast 110km Ultra, running together with Jacek and came in as first female that day, proving Jacek wasn’t the only talented distance runner in the household.

Before the South Downs 100k, Jacek and Ela spent some time in Scotland, running and walking on the West Highland Way. They did a couple of training activities there where they covered 48 miles and 34 miles, so they were fairly well prepared for the task ahead. Unfortunately had picked up an injury though which put her race in jeopardy. She was still determined to do it though. 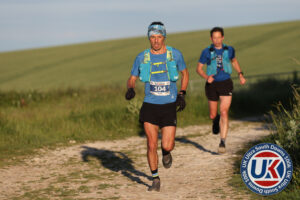 It was a very early start for Jacek and Ela, with the race beginning at 5am. The conditions were pretty good for a long run though as it was chilly and crisp with very little wind and the outlook was sunny.

Jacek’s plan was to keep to an average of around 8 minutes per mile. Whilst that may not sound quick for a runner of his calibre, when you factor in the distance he had to go along with the toughness of the terrain, that would have represented a very strong run. 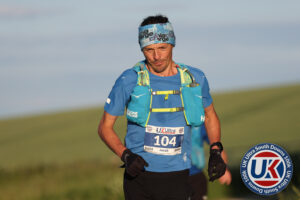 For the first five miles of the race there were no massive climbs and it was on the sixth mile that the trajectory took a sharp upward curve. And that was pretty much the story for the rest of the race. It was either going up, or coming back down.

Of course, that kind of profile suits Jacek but in this race, he had some tough opposition. Very soon there were a group of three runners established at the front of the race. Then in behind them was a second group of four, of which Jacek was one of. 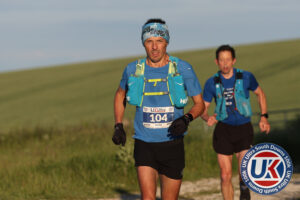 For the first 40km, Jacek had others to run with

By the time they reached the first checkpoint, Owen Davies was out in front on his own, with three-and-a-half minute lead over the next two runners. They were Joseph Turner and Ben Warren. Jacek’s group were five minutes behind them.

When they reached the second checkpoint, Owen had increased his lead to five minutes over Ben. Jacek was still with a couple of the other runners but they were now almost 15 minutes behind Owen. 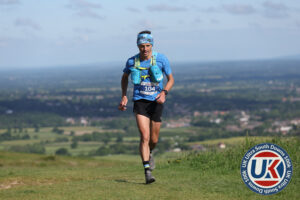 Checkpoint 3 was around the 40km mark and it was then that Jacek decided to go on the attack which then split the group. By the time he got to the fourth checkpoint he was over a minute ahead of Charles Pearson who was 5th. It was a gap that JC would gradually extend as the race went on.

Ben Warren had caught Owen Davies by the fourth checkpoint and they were having a good little battle between them for race lead. 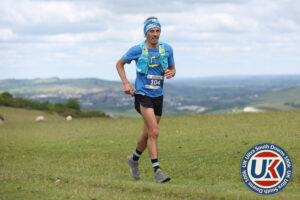 Aerobically, Jacek’s body was ready but from a muscular and core strength perspective, he wasn’t at 100%. He got through the first 40 miles okay but after that he started getting pains in the groin area. That forced him to slow done, even though he still felt like he had plenty of energy.

In the end it was Owen Davies who came out on top, completing the course in a total of 8 hours 17 minutes and 11 seconds. Joseph Turner put in a really fast finish to steal second place away from Ben Warren in the end, getting over the line in 8:20:09. Ben arrived four minutes later, clocking a time of 8:24:20.

JC was cruising in for a fantastic 4th place finish

Those three were simply too strong on the day and it’s not often Jacek has to say that about anyone. He reached the line half an hour later, clocking a still mightily impressive time of 8:54:23 to take 4th place.

In the end he’d managed to build up the gap between himself and Charlie Pearson who was in 5th to 18 minutes, with Charlie getting to the finish in a time of 9:12:53. 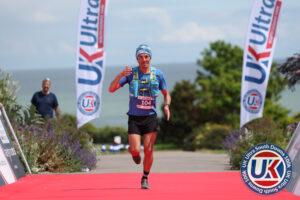 JC arrives on the approach to the finish

Andrei Adam had started off slow but gradually clawed his way up the field to finish in 6th place, registering a time of 9 hours 36 minutes. The other two runners who had been in Jacek’s group at the beginning finished in 7th and 8th, with Andrew Siggars coming in in 10 hours 1 minute and Jordan Eastwood getting round in 10:21:10. 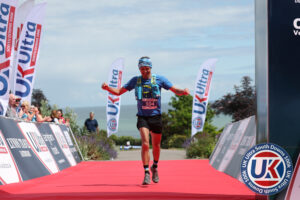 Considering she’d had an injury to contend with, Ela did tremendously well to finish at 8th fastest female and 33rd overall. Her time for the event was just over 12 hours 33 minutes. 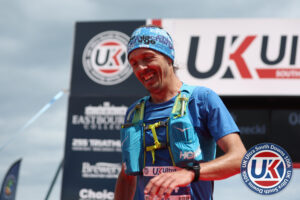 It was a relief for JC to complete the course

In total there were 118 runners taking part in the race and 111 of those successfully negotiated the entire 100k route.

Jacek finished first in the 40+ category so it was still a good result for him, even though he didn’t win the race outright. He knows now that he needs to work on his core strength a bit for future ultra races so that his legs can allow him to reach his aerobic potential. 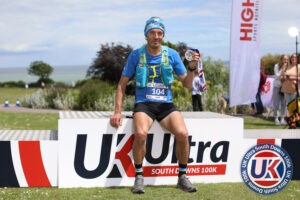 He’d finished 1st in the 40+ category

In the end he wracked up a total of 63.6 miles for the run according to his Strava activity and his average pace was an amazing 8:24. When you consider how steep the slopes were and how constant the ups and downs were, it was an excellent performance from JC and another big accomplishment to add to his resume.

No doubt he’ll be returning to winning ways again in the near future and in fact, he has pencilled in the Portland 10 which is the next fixture in the Dorset Road Race League. That will be a big boost to the Bournemouth AC squad as they look stave off Egdon Heath Harriers title charge. 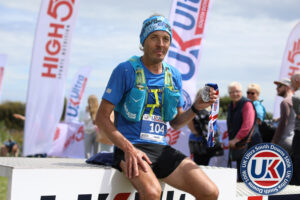