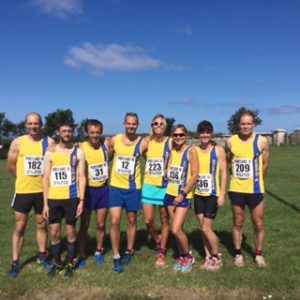 Team BAC prepare to tackle the hills of Portland

As the day of the Portland 10 came round many Bournemouth AC members were dreading the prospect of the tough, hilly route they were about to negotiate. As anyone who is familiar with the Isle of Portland will know, there is very little flat surface, meaning a very taxing 10 mile race was inevitable.

The fact it was a Dorset Road Race League fixture meant that Bournemouth AC had to get a team of at least five men and three ladies together in order to count in the all-important team competitions.

As always, BAC team captain Rich Nelson battled to scrape a team together, which he eventually managed after a fair bit of chasing and hounding. Ian Graham was down to do the event initially but had had to pull out due to injury. In the end Alex Goulding reluctantly stepped up to complete the mens’ team and they were good to go.

The race started near Portland Red Triangle Cricket Club and after a lap around the central area of the isle it then worked it’s way down to the most southerly point, Portland Bill, with it’s instantly recogniseable and iconic lighthouse. From there the route went steadily back up toward the centre of the isle before finishing with part of a lap round the cricket ground.

It turned out to be every bit as tough as the elevation graph suggested. Everyone found the constant undulation with very little respite between inclines extremely tough to contend with. Everyone except Jacek Cieluszecki that is. 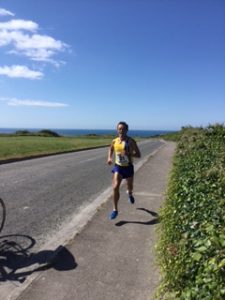 Jacek set off at a blistering pace leaving all the other competitors trailing in his wake. By the time he reached the two mile mark, Jacek and already opened up a considerable margin over his nearest competitor. That gap would only grow as the race went on. 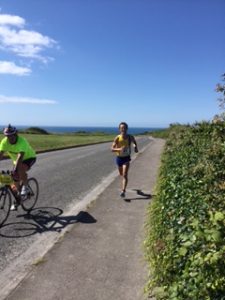 Jacek’s unassailable lead meant that the only battle he really had was to keep himself going knowing that race win was surely sewn up. By the end of race, Jacek had opened up an advantage of almost five minutes on the second placed runner. The race organisers could scarcely believe it as he crossed the line in an astonishing time of 54 minutes 24 seconds, tearing up a course that should really have been a very slow one on paper. 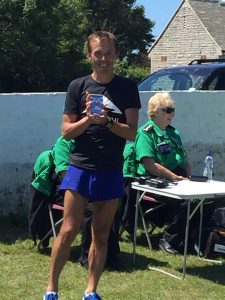 Jacek claims the prize for 1st place with a sensational performance

Another BAC member who had an exceptional race was Tom Paskins. Tom has been in sensational form of late and managed to turn in yet another superb performance to finish in 8th place with a time of 62:10. Again, on a course this tough that is some achievement.

Tom had sited that he had been incorporating more hills into his training of late after noticing a weakness in that area compared to others around him. That additional hill focus definitely seems to be paying off and Tom is now reaping the benefits of correcting that flaw. 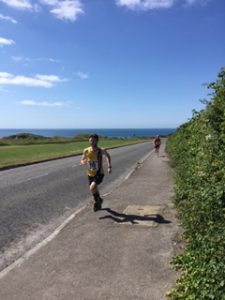 In fact, Tom was having an interesting tussle throughout the race with Iain Trickett of Dorset Doddlers. Iain overtook Tom at first but Tom was able to find some extra strength in order take his place back. However Iain responded by getting past once again near the end and managed to hold on, finishing ahead of Tom by just four seconds. Iain is widely regarded as one of the top distance runners in the area so to be battling him for placings demonstrates the great progress Tom has been making of late.

Alex Goulding wasn’t overly enthusiastic about hitting the hills of Portland but Rich managed to twist his arm in the end. Alex came into the race off the back of a hard training session with Andrew Ridley the previous day after bolting round the Bournemouth parkrun course in lightening quick pace as usual. 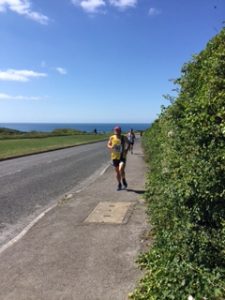 These exertions wouldn’t have helped Alex as he struggled to get to grips with the undulating route at Portland. He set off at a steady pace hoping to be able to pick it up a bit later on in the race. Sadly he found his energy levels wavering and he was unable to attack the race in the latter stages as well as perhaps he could’ve done on fresh legs.

The 10 mile distance is also a little further than the shorter distance races that Alex prefers but he decided to take one for the team on this occasion. In the end he did not disappoint either, still managing to secure a top 10 finish, which is quite an achievement in such a high standard field. His time was 63:25 which, although it didn’t impress Alex himself, most people would have been overjoyed with a result like that. 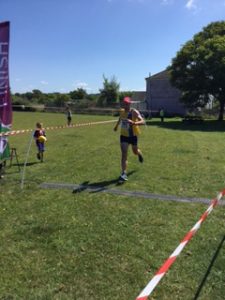 In the women’ race, Nikki Sandell was having an intriguing little battle of her own with Isobel Rea of West 4 Harriers. This was for 1st placed lady. Nikki had been leading the way up until around the 6 mile mark when Isobel caught her up.

An interesting head-to-head battle ensued with Isobel eventually managing to escape on the final climb. Isabel recently completed the Comrades Marathon, an 86km ultra in South Africa featuring many of the world’s top ultra runners, including Bournemouth’s very own Steve Way. This gives an idea of the kind of prowess Isobel has, so to be battling her is again a testament to Nikki’s excellent form. 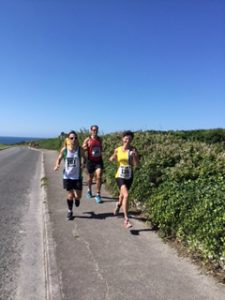 Nikki’s finishing time was a season’s best of 67:59 which again, given the profile of the course, is a magnificent effort. This put her in 32nd place overall. 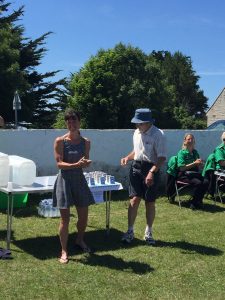 Nikki picks up her prize for 2nd placed woman

Next over the line for BAC was Richard Brawn. Richard has been in great form of late, recently securing a new half marathon PB as well as a couple of new parkrun PB’s. Richard started off relatively well but began to fade as the race went on. 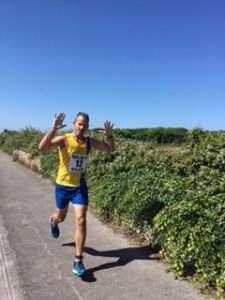 Richard Brawn was glad to reach the top of hill, not realising that there was another one just around the corner

Struggling to cope with the seemingly continuous elevation, he lost a fair few places in the latter stages and in the end was happy to finish just under 70 minutes with a time of 69:54. This put him in 45th place. 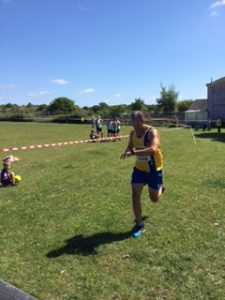 Fifth scorer for the mens’ team was Jud Kirk. Jud again didn’t manage the sort of time he would expect from a 10 mile race but given the difficulty of the course, his time of 74:10 was still a decent effort. This was enough for 66th position on the day. 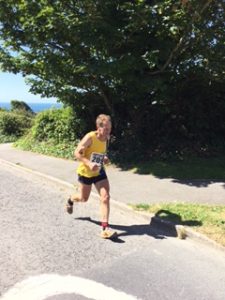 Shortly afterwards Linn Erixon Sahlstrom arrived, securing a superb time of 75:13 in her first ever 10 mile race. Linn is more of an ultra runner by nature so the 10 mile distance to her would be classed as a short distance. Linn was the 6th lady over the line and was 70th overall. 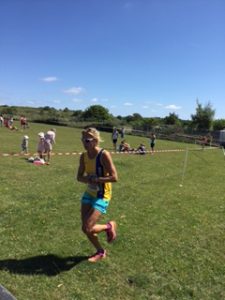 Completing the ladies team, Yvonne Tibble managed yet another category win, adding a Portland Bill tea towel to her ever increasing collection of prizes. Besides being 1st V55, Yvonne was the 8th lady to finish and placed 74th overall with her time of 77:36. 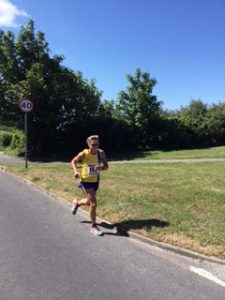 Yvonne Tibble on her toward another great category win

In terms of the team competitions, Poole AC won the mens’ with four members in the top ten, in comparison to Bournemouth’s three. There didn’t seem to be a women’s team prize but if they’re had been it would’ve gone to Bournemouth with all three ladies finishing in the top ten.

Considering the struggle that it was just to get a team together, this would have to go down as very successful outing for BAC. Hopefully there will be more interest for the Rock Around The Rock 10k, which is also in Portland, as well as the other future Dorset Road Race League fixtures.