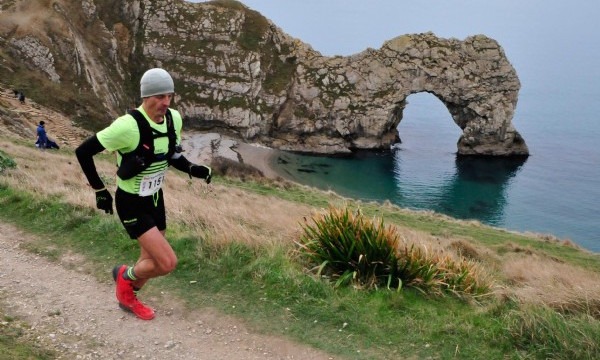 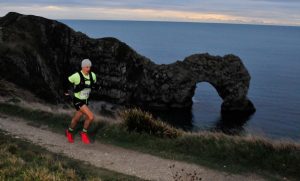 There are very few superlatives that can accurately describe the sheer dominance of this man in virtually every local race he enters of late. And the next race on his hit-list was the Dorset edition of the Endurancelife Coastal Trail Series 2017. I am of course referring to the one and only Jacek Cieluszecki. 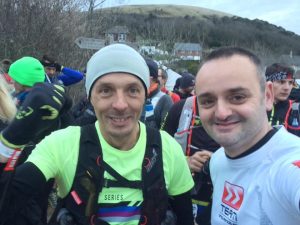 Jacek with his friend Artur Majewski who did the 10k event

Jacek has been in scintillating form of late, winning the Bournemouth Marathon as well as a host of other local races including a couple of the Dorset Road Race League fixtures, the Portland 10 and the Round the Rock 10k. He also claimed 1st place in the English edition of the Red Bull Wings for Life and also finished very high up in the OCC Mont-Blanc and Eigar 51, a couple of high profile mountain ultras.

The CTS Dorset race was right up his street, with the route running along the Jurassic Coast Path featuring 5,786ft of climbing. Jacek does a lot of his training on the hills of the Purbeck and is very well equipped to deal with the severity of the inclines and the often unforgiving nature of the Dorset coastal weather-front. The high cliffs and stunning ocean backdrop provide a spectacular setting to perform on. 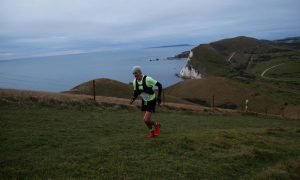 With over 5,750ft of climbing, the CTS Dorset ultra is one of toughest out there, but like a true pro, Jacek took it all in his stride

The race started off at Lulworth Cove and by the time he had reached the first checkpoint at Upton, Jacek had already built up a lead of almost 3 minutes. The lead was destined only to increase as the race went on.

The second checkpoint was at Tyneham, which Jacek arrived in just under 3 hours. He was now 13 and a half minutes ahead of his nearest rival.

Even before the race began, Jacek knew he’d have a good chance of beating the course record of 5 hours 6 minutes and 20 seconds, which was set by Alex Collins last year. That target was a good motivator for Jacek to keep driving forward despite being way out in front on his own. 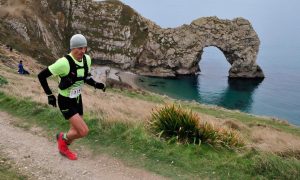 Before long, he was at the third checkpoint, which was the marathon marker. He was now 3 hours 37 minutes in and had an advantage of 16 minute over Tom Le Lievre who was in 2nd. In fact, he wasn’t that far off the pace of the course record for the CTS Dorset marathon, which is 3:29:16, so that could certainly be a target he could conquer for another day.

For now though, it was a case of battling through the tough last 6 miles. This stage of the race was particularly hilly, with some extremely high gradients. Even Jacek had to dig in a bit on these ones.

He arrived at the 4th and final checkpoint in 4 hours 12 minutes. The 2nd placed runner would arrive 19 minutes later. With the last 3 miles to go, Jacek was already home and hosed. It was now a question of how much time he could chalk off the course record.

As he approached the line there were scenes of jubilation. Jacek hadn’t just beaten the course record, he had absolutely annihilated it. His finishing time was a staggering 4 hours 35 minutes and 28 seconds. In fact he’d knocked almost 31 minutes off the previous course record. He’d also amassed an elevation gain of 7,218ft. 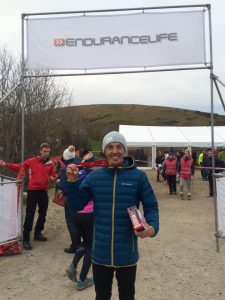 Jacek won the CTS Dorset ultra race in style, annihilating the course record by over 30 minutes in the process

As one would expect, Jacek was very pleased with his amazing victory and his incredible course record and it has rounded off a tremendous year for him, all-in-all. He can take a lot of pride in what he has achieved and no doubt there will be many more successes in the future.

The Dorset CTS ultra plus could be a consideration. That is 45.5 miles with over 8,000ft of ascent. In fact, Bournemouth AC’s very own Toby Chapman won it last year. The course record for that race currently stands at 6:33:42 and that is certainly a target Jacek could conceivably conquer in future if he decided to give it a go.