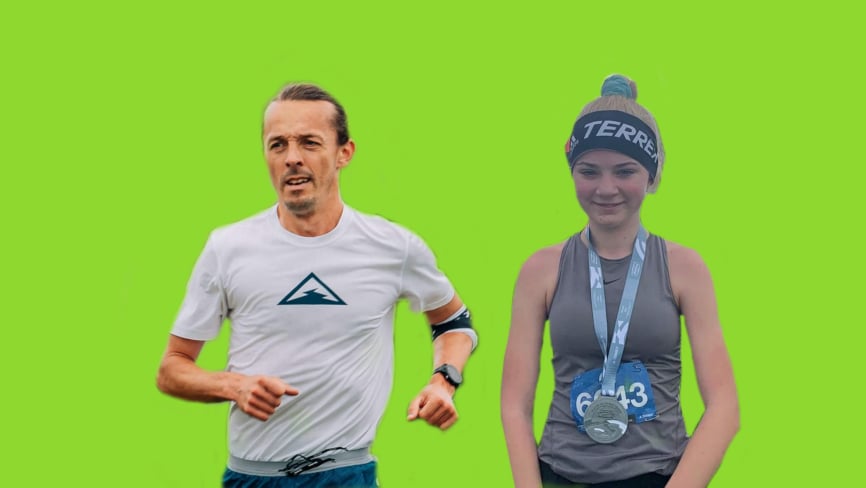 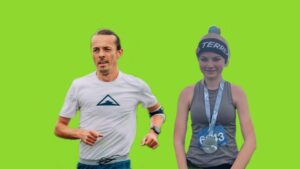 Staged on the rough and rugged and, at times, unforgiving slopes of Swanage, the Maverick Adidas Terrex Original Dorset is one of those types of events that will put absolutely any runner through their paces.

Some of the inclines are so steep that they literally stop you in your tracks and if you add the slippery steps into the equation, and the numerous stiles and gates there are to negotiate, you have a real challenge ahead of you.

It can certainly be difficult to find your rhythm on such varied terrain as well and keeping the pace high as you work your way round is a virtually impossible task. Unless you happen to be Jacek Cieluszecki of course.

This was very much his territory and since he regularly trains over the Purbeck, Jacek knew the route extremely well. This was one he wasn’t going to get lost on, at least!

As is usually the case with Maverick events, there were three different distances to choose from. A Short one, which was 7km. A Middle distance which was 16km and a Long one at 25km.

Unsurprisingly JC opted for the Long distance race. He was joined in that by Steve Ross who was also hoping he’d be able to rise to the challenge and hold his own over the tough terrain.

There was also Bournemouth AC involvement in the Short race, with Emily Coltman in action, running it alongside her dad Jason. Emily is one of the club’s brightest young prospects and has done very well in her recent competitive races.

In October last year she took part in the Maverick Jurassic Coast ‘Short’ race and finished as 2nd fastest female that day and was 9th quickest out of 91 participants.

Then in December she was 3rd placed female in the TrailX Winter Woodland Run 4k clocking a time of 20 minutes and 20 seconds. Emily’s Bournemouth AC teammate Neve East was 1st female that day, getting round in 18:55. 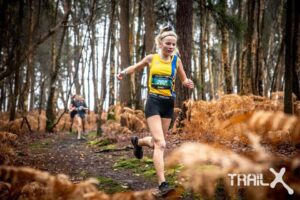 This year Emily has competed four times on the track, first featuring in a Mile race at The Opener in Worthing where she finished in a time of 5:52.71. Then she did the 800m at the Yeovil Sprint Track Open clocking a time of 2:39.11. 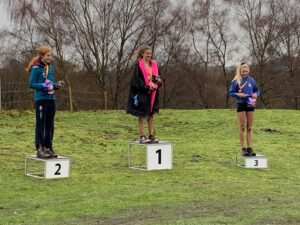 The Maverick Dorset was going to be Jacek’s first race this year. He’d done a few events toward the backend of last year though and they had proved fruitful for him.

In September he won the Endurancelife CTS Exmoor Ultra Marathon which was supposed to be 32.4 miles in distance, although Jacek went the wrong way at one point and added an extra mile on.

He set a resounding new course record on the day as well, marking a very successful outing. A few weeks later he won again, at the Exmoor Coast 55k, beating the previous course record by 30 minutes.

Then he won the Hellstone Marathon as well in a time of 3:33:50 despite being sent the wrong way after a member of the public sabotaged the course by manipulating the route markings.

Attending all the Tuesday and Thursday evening sessions at BAC, Steve Ross had been training well of late and covering a lot of miles. That gave him good reason for optimism leading into the Maverick Dorset race.

The format for the race was a staggered start to keep it COVID secure, with those competing in the ‘Long’ race heading off first. The first runners set off at 9am.

JC began his race at 9:04 and by that time he already had a few solid runners ahead of him. Once he got going, his task would be to reel them all in, one by one.

That included Oliver Caldwell of Southampton Triathlon Club, Lawrence Waters, Ben Smith of Welland Valley Triathlon Club and Dion Garner of Poole AC. They’d all started off just after 9:01 so had been out on the course for almost three minutes before JC set off.

The route went from Wilkswood Farm, heading down towards the Jurassic coastline and along the coast for around 5 miles before heading up to Kingston and looping back round. After that it was back through Worth Matravers and back to Wilkswood Farm.

Getting away pretty quickly, JC completed the first mile at 6:41 pace, despite it having a fair big hill. He then followed that up with a 5:49, a 6:04 and a 6:36 mile. There aren’t too many runners out there who could go at that pace over that sort of terrain. 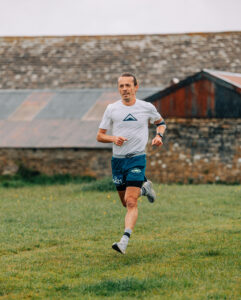 Using the staggered start to his advantage, Jacek looked to chase down his targets like a lion stalking its prey

The sixth mile included some really steep steps down and then a really steep climb back up on the other side. It’s an almost unrunable section, although JC may have found some way to do it.

Even though it took some time to get through that patch, Jacek was going so fast over the downhill and flat sections that he was making back a lot of the time he was losing on the climbs.

On the 9th mile there was a near on vertical time which again, was extremely tough to run up. And another testing one on the 13th mile as well.

Nothing could stop JC from motoring through it though and he successfully managed to catch all the runners who had started off before him.

In general he was feeling pretty good. It was only on the hills where he wasn’t a hundred per cent happy with his performance, which is odd because that is usually his strong point. It could be just down to lack of race practice though. In all likelihood he was still going up them way faster than anyone else. 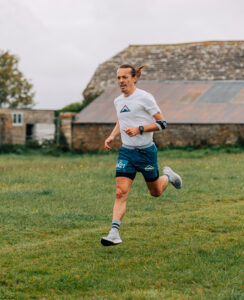 Finishing in a time of 1 hour 44 minutes and 49 seconds, Jacek had well and truly bossed it. With an astonishing average pace of 6:42 minutes per mile for the 25km, despite the 2,000ft of elevation, it was a time that no one else could get near.

Although he found it pretty tough going, Steve Ross had a terrific run and handled the mammoth hills and testing terrain extremely well on the whole.

He’d started off quite a bit later though so there were occasions where he was getting held up by slower runners who had set off before him. At one point though he got overtaken by Rosie Acton and she’d started 7-and-a-half minutes after him.

There wasn’t a lot he could do though really except just admire her amazing running style and watch how easy she was making it look. And that’s coming from Steve, a guy who is renowned for having a rather smooth technique himself. 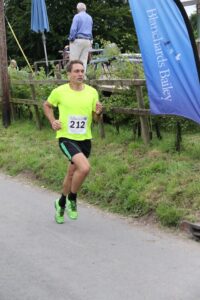 Steve kept pushing though and crossed the line in a time of 2:18:37. That put him in 21st place in the overall standings out of a field of 175 runners.

The prize for 1st female though went to Frankie Snare who got round in a time of 2:10:54, putting her in 8th place on the overall leaderboard.

Meanwhile, the ‘Short’ race presented Emily Coltman with a chance to shine and she wasn’t about to let it fall by the wayside. With her dad Jason accompanying her, she set about tearing through the trails on the 7km route.

Although there were some pretty brutal hills to conquer, Emily coped very well and managed to get round in a superb time of 37 minutes and 37 seconds.

Due to the staggered start though, she had no idea how she’d done in comparison to others until the results were published later. It turned out she’d done extremely well and had in fact finished as first female. She’d also been 5th fastest overall in a field of 90 runners. Jason managed to keep up with her as well to come in in 6th place. 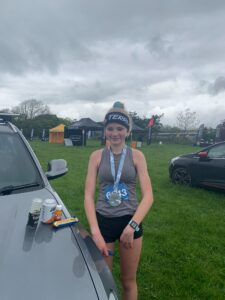 The 2nd placed lady took over two minutes longer than Emily to get round and that was Christina O’Conner who finished in 39:49. She was 11th overall and was followed by Ashleigh Stock who was 3rd female and 13th overall with a time of 44:33. 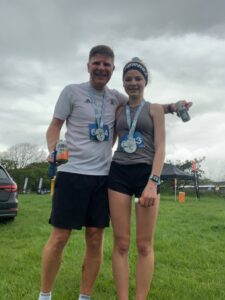 It was a resounding win for Emily and showed that even though she’s in the Under 16 category, she can be very competitive against much more experienced opposition and that can only bode well for her in future races. 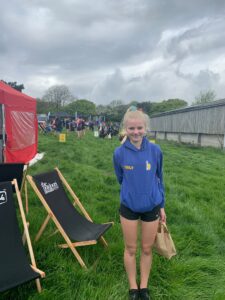 The Middle distance race was won by Pierre Papet who completed the 16km course in a time of 1:12:15. He was followed by Dasos Gonnella who finished runner up in a time of 1:13:31, with the 3rd placed runner getting round in a still impressive time of 1:15:42. 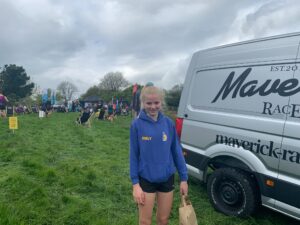 The tough, hilly course didn’t put Emily off and she excelled on the tricky trails

Next up for JC is another Maverick event as he takes on the 57km Maverick Adidas Terrex X Series Exmoor Ultra. This is a race that is deemed to be the toughest out of the entire Maverick calendar.

The route for that one incorporates a vertical ascent of 2,065m which would be enough to have most runners quaking in their trail shoes. Not Jacek though. With him it’s more a case of, the harder it is, the more it excites him. And the more chance he will have to excel against any other competitors who dare to take him on.

He’ll have the two Exmoor based races he did in Autumn last year to draw on for experience as well so he will be well equipped to put in another outstanding display.