JC and Ken check in at Charmouth Challenge 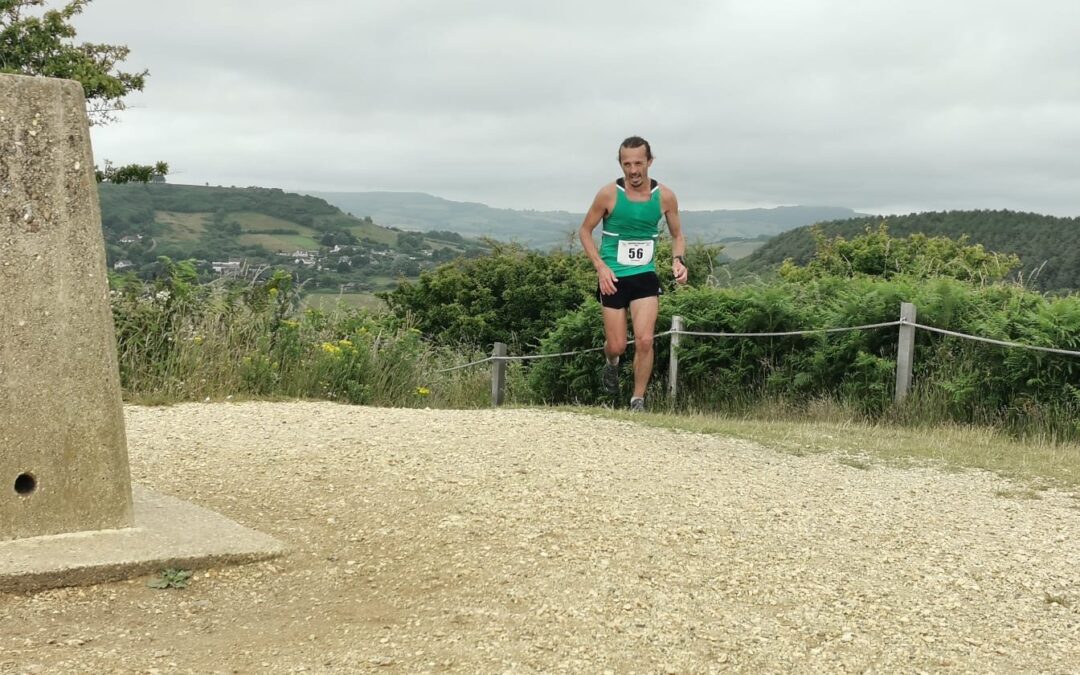 Including an ascent up Golden Cap, which is the highest point on the South Coast at 191 metres, the Charmouth Challenge is packed with testing ascents throughout. With close to 1,700ft of climbing within the 8 mile route, it was a daunting task for most of those taking to the start line. For Jacek Cieluszecki though, it was very much in his domain.

A true specialist when it comes to steep inclines and fell running, JC loves these types of courses and he was very much looking forward to powering up the slopes and exercising his climbing prowess.

Also braving the route from a Bournemouth AC standpoint was Ken Parradine. Ken is in the over 70 category and does have a bad hip which he feels has caused him to lose a little speed. But the enthusiasm to get out and race is still there and taking on the Charmouth Challenge proves he isn’t afraid of a difficult course.

Coming off the back of a recent win in The Bosun, a race which also incorporated a climb up Golden Cap, and having previously won the CapTEN as well, JC had a proven track record on that very terrain. In fact, he ran the fastest ever time at the CapTEN, despite a course change meaning that an extra incline had been added.

At the end of May he completed the UK Ultra South Downs Way 100k in 8 hours 54 minutes on a course which featured almost 8,000ft of elevation. Although he didn’t win the race, it was still a mightily impressive performance from JC and proved he’s still at the top of his game in those types of races. 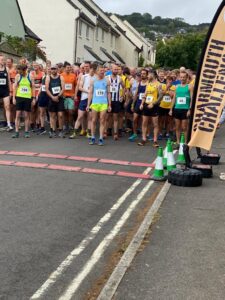 At the Charmouth Challenge there was one other runner in the line up who Jacek was thinking might be able to challenge him but that guy didn’t show up so that made it perhaps a bit more straight forward for JC than it otherwise would have been.

It was an unseasonably windy on the Jurassic Coast that morning which made it slightly chilly and that added to what was already an incredibly challenging spectacle for the runners. 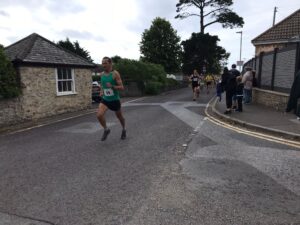 Jacek Cieluszecki soon broke away from the rest of the field

The first kilometre of the race was pretty quick, with the real climbing beginning just after that. Going through the first mile in 6:27, despite the 230ft of elevation, JC then went on to get through the next mile, which was all uphill, in 6:38 pace.

Once he was over the top of the hill, he then had to come back down, which led to a very quick 5:39 third mile before starting on the next climb in the fourth mile, which he got through in 6:29. 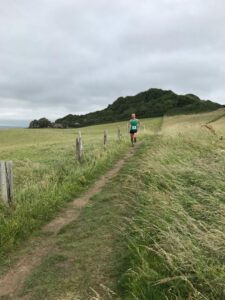 Jacek motors through the field 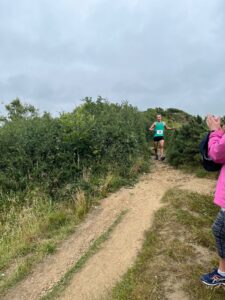 JC hurtles down the trail

The climb was very tough and forced JC down to a 7:24 for the fifth mile, even though a lot of it was coming back down the other side. Getting through the sixth mile in 7:02 it was then onto the final big climb for the seventh mile. That mile contained 345ft of elevation and put Jacek down to a 7:35 before he blasted down the last descent and into the finish. 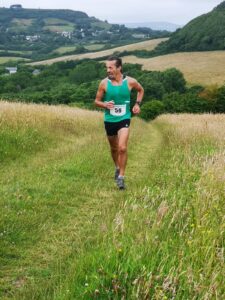 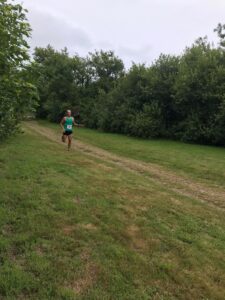 Jacek speeds down the slope

Clocking a winning time of 52:11, JC had an advantage of over three minutes over his nearest rival who was Andrew Snook of Axe Valley Runners. He got round in 55:35, with Daniel Thomas of Bridport Runners taking 3rd in 55:40. 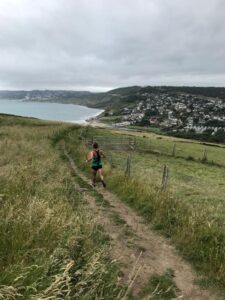 JC was super quick on the descents as well

The prize for first female went to Sarah Rollins and she reached the line in 1:07:25 to take 26th place overall. Becky Tovey of Chard Road Runners wasn’t far behind, taking 2nd lady position and 32nd overall in 1:08:16.

Jacek makes it to the top of the hill

Jacek’s wife Ela was also competing and she was 16th fastest female, getting round in a time of 1:22:03, which put her in 90th place overall and 4th in the women’s under 40 category. 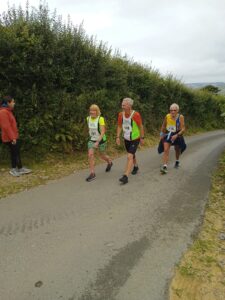 Ken Parradine makes his way up the hill

As for Ken – he claimed 190th position in the overall rankings with his time of 1:47:35 and he was 8th in the Male Over 70 category. Given the trajectory of some of the inclines on the route, that was a decent effort from Ken and he still managed to finish ahead of numerous others. There were 215 taking part in the race in total.

Ken is already looking forward to other forthcoming races he’s entered and that includes the D’Urberville Dash which is coming up soon. 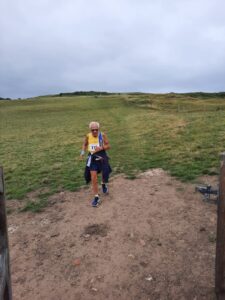 Ken did well to negotiate an extremely tough course

Jacek didn’t have to wait long before lacing up his racing shoes again, although it was his road ones this time as he was in action at the Portland 10 the following day.

His record at the Portland 10 had been impeccable, winning all four of his previous attempts, so it was no surprise to see him back on the start line on that one, even after a tough fell race the previous day.

It was also the day that Egdon Heath Harriers had the opportunity to be crowned Dorset Road Race League champions if they could seal the win. BAC were of course hoping that with JC in their ranks that might be able to prevent that from happening but it was certainly poised to be an intriguing battle. 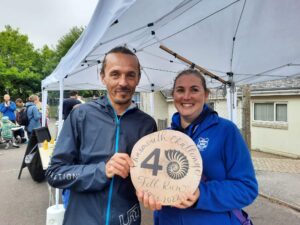 July 02 was a dull and windy day,
Four of us in the car, we were on our way
Derek our driver kindly used his car,
The trip was wonderful and not very far
Getting parked was easy, the ticket was not
£5 a day but it was £6 the machine got
It was time to get ready and into a bunch
We wanted to finish in time for our lunch
The first mile was easy, then it got tough
As time went by, it was in and out of the rough
Derek ran up a hill when a walker passed him by
All he could utter was an exhaustive ’Hi‘
We finished the race and our times were good,
It was time for tea and hopefully some food.
I felt unsteady but help was at hand,
Julie bought me a tea and then I felt grand.
A B.A.C. runner won the race on this day
With another behind but quite far away.
The other was me but I wasn’t last
It was a brilliant day although overcast