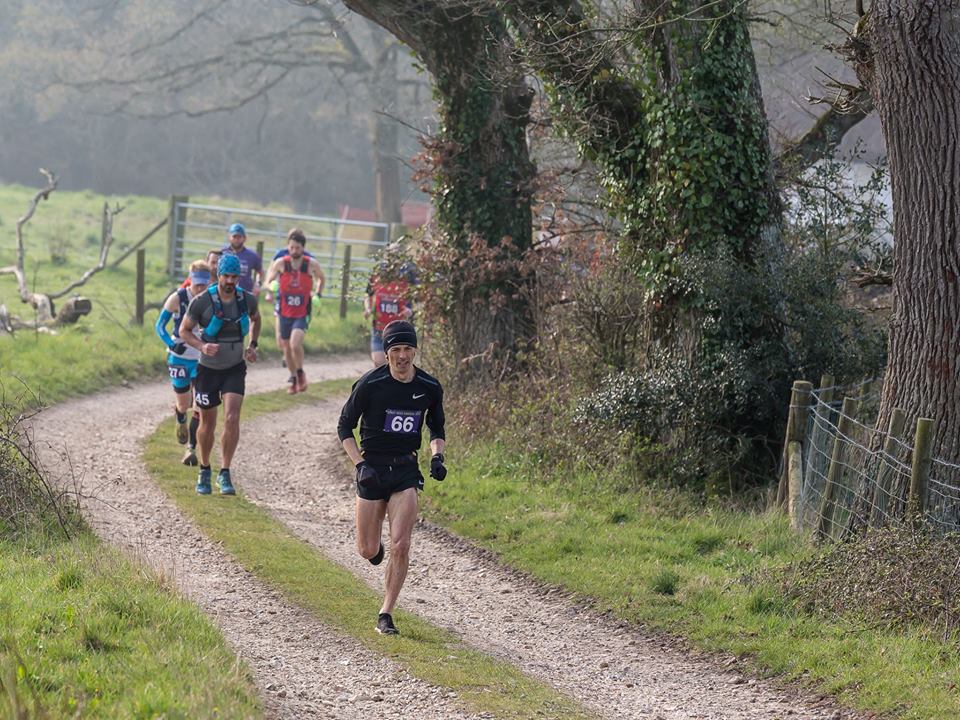 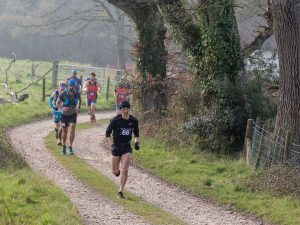 Jacek Cieluszecki takes an early lead in the Dorset Ooser Marathon, a race which runs through the heart of the picturesque Dorset countryside

With hills aplenty, muddy sections galore, several stiles to clamber over and many intricate trails and tracks to negotiate, the Dorset Ooser Marathon sounds like something that would have most runners quaking in their Hokas. Not Jacek Cieluszecki though. That’s his idea of bliss and he was well and truly in his element in those surroundings.

JC wasn’t the only Bournemouth AC member brave enough to try their luck in the Dorset Ooser though. Kirsty Drewett was also in action as well, taking on the Half Marathon. Jacek’s wife Ela, who also ran the Barcelona Marathon with him recently, entered the Half Marathon race as well.

The Dorset Ooser is a put on by Badger Trail Events and takes its runners into deepest darkest Dorset via old tracks, hidden hollows, ancient woodlands and forgotten trails.

The races start from an ancient thatched barn in the tiny hamlet of Turners Puddle, right in the heart of Dorset. It’s straight uphill from the outset, where the route then follows farm tracks through fields and then winding through ancient woodland trails, heathlands and other picturesque hamlets amongst the glorious Dorset countryside.

It’s not all fun and games though and admiring the scenery. The marathon features 13 hills, over 1,000 metres of elevation, some muddy sections, 7 stiles to hurdle and two fords. In fact, such is the difficulty level of the marathon that it carries two UTMB points for anyone accomplished enough to complete it. 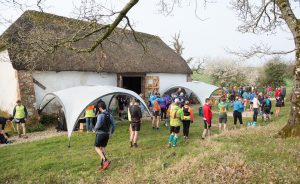 In keeping with the theme of appreciation of the wonderful Dorset countryside and in the spirit of environmental friendliness, the Ooser is a cupless race, meaning no disposable plastic cups will be handed out.

Instead, runners are encouraged to bring their own hydration packs or invest in a super light re-usable folding cup. It’s a theme most European trail races now adopt and more UK ones are now beginning to take on as well. 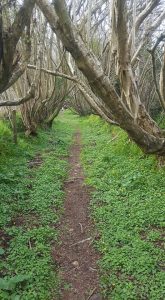 It had only been three weeks since he ran a 2:34 marathon in Barcelona and since then he’d also won the Weymouth Half Marathon as well, but once he gets on a roll, there’s no stopping Jacek. He conquers all in his path with a devastating velocity.

Getting off to a good start and thrusting himself into an early lead, it was all academic from that point on. JC outclassed all his opponents and accelerated further and further away from the rest of the field throughout the run. 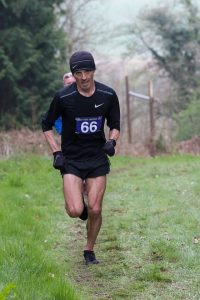 He didn’t even have any water with him, or a cup, but it didn’t matter. Jacek tore round the course at a pace that onlookers could barely believe.

The only slight hiccup was when he got lost for a while on the 25th mile. The route was mostly marked out with small flags, tape or arrows. Unfortunately, Jacek was hurtling down the descent at such a speed that he managed to miss an arrow that was on the gate and ran straight by. 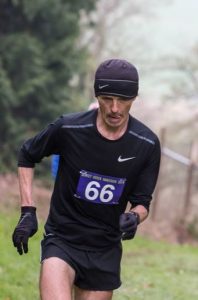 After a momentary lapse in concentration, Jacek went off-track at mile 25 but soon found his way back on route

That cost him around about two minutes before he realised he’d gone wrong and found his way back to the designated route. In some circumstances, that could have been catastrophic. In this instance though, Jacek was almost half an hour ahead of his nearest rival, so there was no danger of him losing the lead.

Crossing the line in a time of 2:53:46, Jacek had ran a brilliant race and the slight detour had brought his total distance covered up to 27 miles. 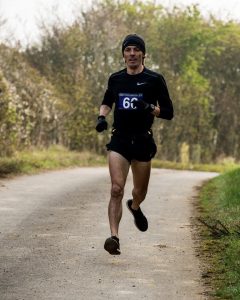 Despite an elevation gain of 2,654ft, Jacek somehow managed to run at an average pace of 6:25 per mile, which is quite staggering really over such a taxing route.

The 2nd placed runner, John Melbourne of Tadworth AC arrived at the finish 27 minutes later, registering a time of 3:20:50, so it was as comprehensive a victory for Jacek as you’re ever likely to see. Paul Russhard took 3rd place in a time of 3:22:50. 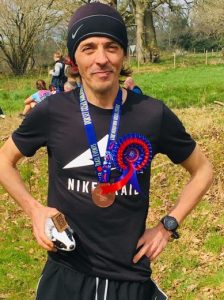 It was another excellent victory for JC with his time of 2:53:46 giving him a huge winning margin of 27 minutes!!

Tracy Cook of Dorset Doddlers was first female over the line and did very well to come in 6th overall in a time of 3:34:51. Jessica Anand was 2nd female in a time of 3:55:04, which put her in 24th place overall, with Charlotte Baker of Gillingham Trotters taking the prize for 3rd lady in a time of 3:59:48.

A total of 247 people completed the race, all finishing comfortably within the eight hour cut off time.

Meanwhile in the Half Marathon race, Kirsty Drewett was having a whale of a time, out there enjoying the start of the British summertime.

Luckily, Kirsty also enjoys the tougher, trickier trail routes and spends a lot of her time over the Purbeck enjoying the fresh countryside air. And running of course.

In fact, she chose the Purbeck Marathon as her first ever attempt at the distance, so that underlines the courageous and adventurous approach she takes with her running.

Since she wasn’t going for any particular time though, Kirsty just treated it as a fun run, admiring the lovely countryside and taking in the views as she went along. 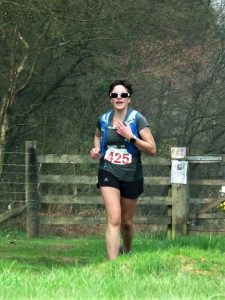 Despite walking up most of the hills and not really pushing herself to the limit at any point, Kirsty still finished in 49th place in the final standings, completing the course in a time of 2:04:07. Not a bad result for a casual morning in the Dorset wilderness.

Kirsty’s elevation gain for the run came to 1,188ft and she finished with an average pace of 9:13 per mile, which isn’t bad considering she walked up a lot of the hills. Jacek’s wife Ela ran well as well, taking 56th place and registering a time of 2:08:31. 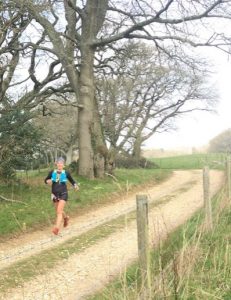 Jacek’s wife Ela also featured in the half marathon race

Former Bournemouth AC man Sean Edwards, now back in Lytchet Manor Striders colours after a brief stint in the yellow and blue, was the only man to complete the half marathon course in under 1 hour 30 minutes.

His time of 1:28:06 netted him the win, with a  margin of almost three minutes over Nicholas Twomey of Ranelagh Harriers who was 2nd in a time of 1:30:53.

Bruce Campbell of Egdon Heath Harriers took 3rd place in a time of 1:35:16. The first female over the line was Caroline Stanzel who was 10th overall, completing the course in a time of 1:38:55. 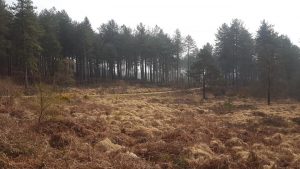 She was followed by Sarah Trim of Running for Time who registered a time of 1:42:31 to put her in 12th overall. Tamsin Neale of Burnham Joggers was 3rd lady, finishing in 1:45:32 which put her in 15th on the overall leader-board.

Next up for Jacek is the Rotary Easter Quarter Marathon in Boscombe which he will complete as part of a longer training run. He’ll then head over to Florida for the Wings for Life Run on 5th May, where he’ll attempt to be the last man standing for the third time in a row. 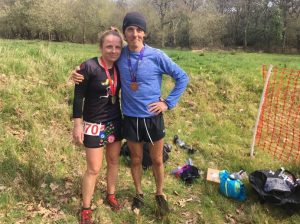