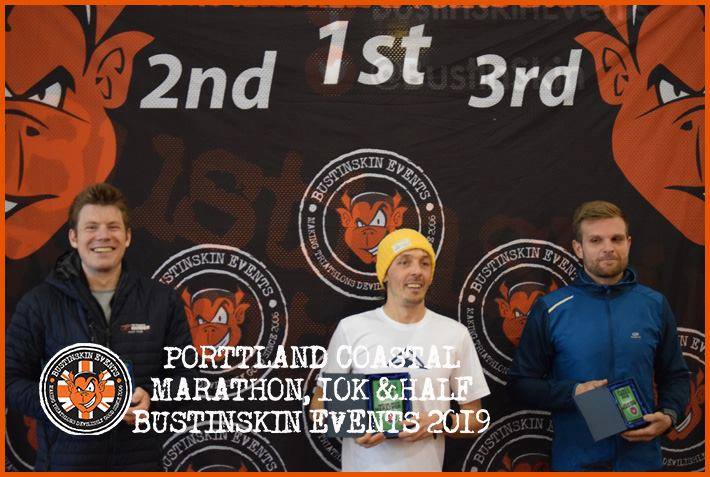 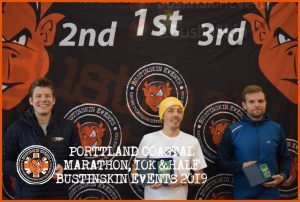 If there’s one thing you can normally guarantee about racing in Portland it’s that you’re going to be in for a rough ride. The quaint little rock is renowned for its unforgiving weather fronts as well as its rugged cliffs and harsh, undulating terrain.

That being said, one man who seems to feel right at home over in Portland is Jacek Cieluszecki. JC has had some emphatic successes there in the past. In 2017 he won both the Portland 10 and the Round the Rock 10k.

Then last year he followed that up by winning the Portland 10 again by an other huge margin and then taking second place at Round the Rock, being narrowly defeated in a sprint finish by Iain Trickett.

Ollie tends to favour the longer races and is something of an ultramarathon specialist. He’s already completed the Country to Capital 45 mile race this year and took part in several extreme distance escapades last year. They included the 7-day, 250km Namib Race, the 89 kilometre 10Peaks Brecon Beacons race, the Chiltern Wonderland 50 mile race and the 68km Monster Ultra.

He’d almost class a 27 mile marathon as a short race, but one thing is for certain… No one would class the Portland Coastal Marathon as an easy race. It features some incredibly tough inclines and an extremely high elevation count. In fact some of the climbs on the elevation graph look like walls rather than hills.

That kind of course suits Jacek pretty well though. His ascending powers are up there with the best of them and with his regular training over the Purbeck, he’s used to steep, uneven terrain and has the strength to drive up virtually any incline at speed.

The route heads the runners off in a clockwise direction for the first loop of the island, past the recently built Osprey Quay and onto Portland Castle. It then follows Merchants Railway to the Verne, with the impressive architecture of The Verne Citadel now being used as a prison.

It then continues behind the back of the YOI and down Goat Hill. It then follows an old railway line to the back of Rufus Castle, with its remains dating back to the 15th century. 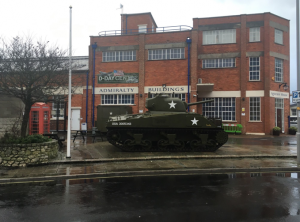 It is then a descent into Church Ope Cove, the only beach on the eastern side of the island. The next landmark of note is Pulpit Rock and Portland Bill, with its iconic red and white lighthouse. The views from the most southerly tip of the island can be spectacular.

After that it is back toward the Sailing Academy where more breath-taking views are evident from the top of West Cliff and back along Chesil Beach and the Fleet Lagoon, the largest tidal lagoon in Britain.

It is then past the ‘Spirit of Portland’ sculpture which depicts and fisherman and a quarryman representing the two main industries of the isle before descending down Lankridge Hill on the Southwest Coast Path towards the Cove Inn pub.

The final section of the loop leads along Hamm Beach before the turning and heading back towards the Sailing Academy. That is only half the route though. The runners then embark upon an anticlockwise loop retracing their steps, only this time going in the opposite direction.

Conditions on race day were not very pleasant at all. In fact, to be fair, they were damn right atrocious, with strong winds and rain and a notable chill in the air.

Rain from the previous day had made some parts of the course extremely muddy, so much so that even for the mighty JC, they were almost un-runnable.

These seem to be becoming the standard sort of conditions for Jacek’s races recently though. It lashed it down when he took part in the 33.3 mile CTS Dorset Ultra on a day that also saw 45 mile per hour winds sweep over the Lulworth Cove.

Then who can forget his horrific experience at the Boston Marathon, where the bitterly cold wind and continuous rain almost brought him to breaking point.

At the Portland Coastal Marathon, some parts of the course had winds of between 30 and 40 miles per hour and the mud was so thick it even had Jacek cursing. 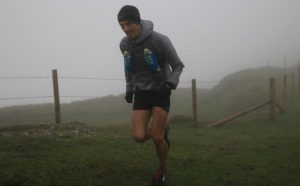 It was another occasion where JC had to battle his arch nemesis. That’s not another runner though, it’s the weather, with high winds and rain making things that much more difficult

Nevertheless though, he managed to work his way through it and was in fact quite a way ahead of the rest of the field by the time he reached the end of his race.

Crossing the line in a time of 3:15:09, Jacek had somehow beaten the course record rather emphatically, sending Jack Galloway’s previous time of 3:28 tumbling into the abyss.

To do that in such inclement conditions took quite some doing, so that was a massive achievement, even by Jacek’s extremely high standards. On a better day, he could have probably gone at least five minutes quicker.

As for Ollie, he struggled a bit in the first half of the race and admits that the awful weather very nearly broke his morale. He’s a very determined chap though and showed great character to persevere.

In fact, he did more than just persevere. He gave it a big push in the second half of the race and managed to move up the field as a result. 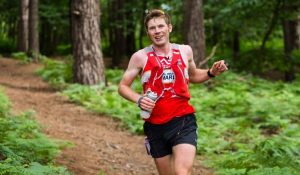 By the time he reached the finish line, Ollie had manoeuvred into second place and sealed the runners spot with a superb time of 3:29:46.

It was a quite magnificent achievement from Ollie and that made it a brilliant Bournemouth AC one-two at the front of the leader-board.

Racking up over 4,000ft of elevation throughout the course of the run, it was a performance he’ll no doubt look back on fondly, although he was suffering rather a lot at the time.

The next competitor to arrive at the finish was Ashley Scott who finished just under three minutes after Ollie, in a time of 3:32:25. 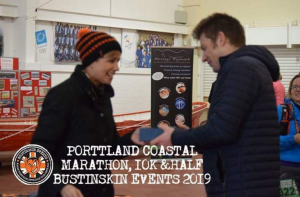 Ollie is awarded his trophy for a well-earned 2nd place, or rather the category often known on the local club scene as “1st runner who’s not Jacek”

Lisa Richards was the first woman over the line, finishing in 4:37:17, just edging out Rachael Moss of Bridport Runners who finished on the same time. The pair were 23rd and 24th overall.

Tara Taylor of Tunbridge Wells Harriers was third lady, clocking a time of 4:40:20 which put her in 27th place overall. A total of 92 participants managed to complete the race in the end and it was great to see the two Bournemouth AC members at the top of the pile out of all those hardy competitors.

Next up for Jacek, he’ll be taking on the Barcelona Marathon on 10th March. At least with that one he knows, the chances of another run in such adverse weather conditions is highly unlikely. You never know, he might even get a bit of sunshine for once! 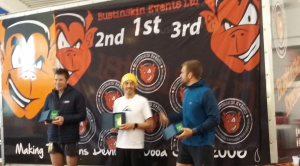