JC, Doc Ollie and Ben Walliman get stuck in at CTS Dorset 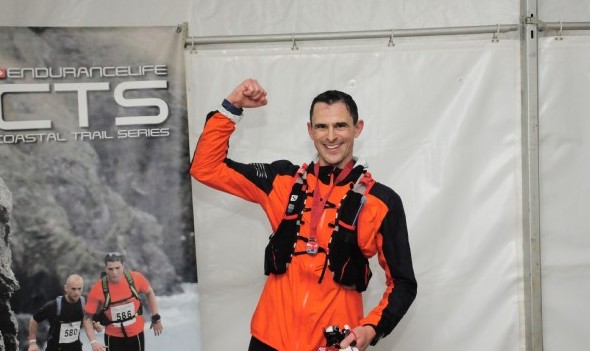 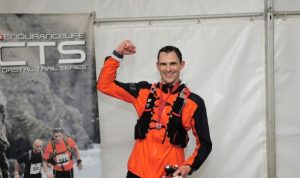 The Endurancelife CTS Dorset isn’t the kind of event you go into expecting an easy ride. The Jurassic Coast Path where the races are stages is renowned for it’s tough, unforgiving terrain, providing hills-a-plenty for the competitors to tackle along the way.

With a “Half Marathon” distance of 16.1 miles and ascents totalling 3,559 ft, an “Ultra” distance of 33.3 miles with 4,910 ft of ascent and an “Ultra Plus” of 45.5 miles and an elevation of 8,040 ft, these races are not designed for the faint hearted, They are difficult and require great strength and stamina, together with an iron will to succeed.

This year though, in addition to all that, the event was made substantially tougher by the inclement weather conditions that gave the athletes a torrid time as they made their way round the course of their chosen distance.

A cold and misty weather front had descended on Lulworth Cove, bringing with it 45 mph winds and sweeping rain that in turn brought about a soggy, muddy surface for the runners to contend with. The thick fog made it difficult at times to even see the path ahead, making it all the more tricky as the participants attempted to battle their way through the severe adversity.

Three brave Bournemouth AC members were in action on the day, with Dr Ollie Stoten taking on the 16 mile “Half Marathon” distance race, as he did in last year’s event. Jacek Cieluszecki opted for the 33.3 mile “Ultra” distance race, with Ben Walliman going extreme to tacked the 45.5 mile “Ultra Plus“.

So how did they all get on? Needless to say, they all found it difficult and had their own struggles to overcome. The original plan for Jacek had been to take on the 45.5 mile “Ultra Plus” distance. After seeing the horrendous weather conditions, he changed his mind though and went for the “Ultra” instead.

That didn’t mean it was going to be easy of course though. He still had a tough 33.3 miles ahead of him that were bound to be challenging.

Jacek was the first man to arrive at checkpoint 1 though, at Upton, reaching the marker in 54 minutes 57 seconds. He was 18 seconds ahead of Tom Le Lievre who was in 2nd at the point. 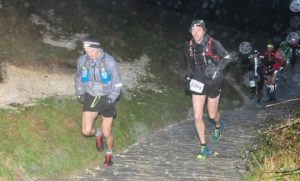 He arrived at checkpoint 2 with an advantage of exactly 3 minutes over Tom, registering a time of 3:19:39 to further extend his lead at the front of the race.

At the next checkpoint, he was still comfortably in front, reaching the milestone in 4 hours and 19 seconds. At this point, he had an advantage of 2 minutes 22 seconds over Tom. The pair were now way ahead of the rest of the field, with the 3rd placed runner arriving over 28 minutes behind JC. 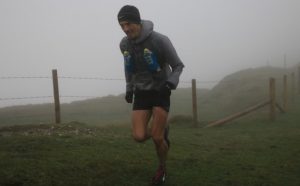 Jacek soon built up a healthy advantage over his nearest rival

At the final checkpoint, Jacek arrived in a time of 4:32:42. Tom followed in 5 minutes and 20 seconds later, meaning it looked like Jacek was well on course to seal the victory. He was now 35 minutes ahead of Mary Menon who was 3rd. 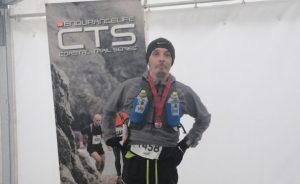 192 people took part in the “Ultra” distance race, with 155 of them making it to the finish. 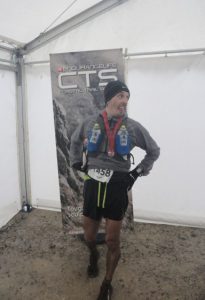 With a winning margin of 8 minutes and 20 seconds, Jacek was pleased with how he managed in the tough conditions he was faced with

Not to be perturbed by the adverse weather, Ben Walliman stuck to his task in the 45.5 mile “Ultra Plus” race and he was determined to get through it. His training had gone well and he’d already put together quite a few long runs along the course which he really benefited from.

Arriving at the first checkpoint in 1 hour 9 minutes and 53 seconds, Ben was in 31st place at that stage. There was still a long way to go though and he knew the bulk of the hard work was yet to come.

By the time the next checkpoint arrived he’d climbed to 26th place, registering a time of 4 hours 27 minutes and 20 seconds. Knowing the course so well did give him an advantage, particularly on the technical descents where he was able to overtake quite a few runners as he knew the best lines. 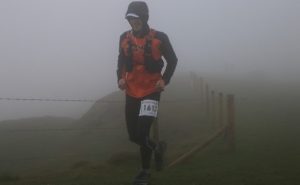 Going through the third checkpoint in just under 5 hours 26 minutes, he was now in 31st place. About 24 miles in he’d hit a tough spot but after a quick call home to speak to his wife and his eldest son who is 2-and-a-half years old, his head was back in the game and he got stronger from that point on.

At the next checkpoint, he was back in 26th place, having been running for approximately 6 hours and 15 minutes. At the following checkpoint, he’d gained a few more places, arriving in 7 hours 4 minutes which put him in 23rd place. 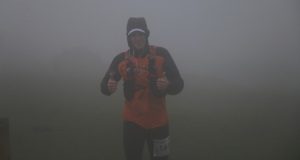 By the time the next checkpoint came round, he was back in 26th place, coming in with a time of 8:18:38. He then went through the final checkpoint in just under 9 hours and 11 minutes, putting him in 24th place.

There wasn’t far to go now and he just knew he had to hang in there. The last 10k loop was the best for Ben and he just about managed to hold off the guy who had been chasing him down for the last mile. It came down to a sprint finish for 24th place, which Ben duly won, crossing the line in a time of 9 hours 47 minutes and 21 seconds.

Ben was overjoyed, not just to finish, but also to meet his target of a sub-10-hour finish

Given that his main target for the race was, firstly to finish it of course, and secondly, to do it in under 10 hours, he’d succeeded on both fronts and was massively pleased with his efforts.

Covering 47 miles in total, Ben had wracked up an elevation gain of 8,159 ft during the course of a race, which gives an indication of how brutally hilly the course was.

A total of 150 people took part in the “Ultra Plus” race, with 94 completing the full 47 mile distance. 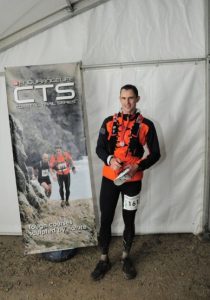 When he looks back on this one, Ben will take immense pride in his efforts, not just because of the extreme distance and elevation but because of the treacherous conditions he did it in

It was a great day for Ben, all things considered and it will serve as a great confidence booster for future longer distances in tough conditions. His next big race is the Isle of Wight Ultra Challenge in May which is 106 kilometres.

In the 16 mile “Half Marathon” race, Ollie Stoten made it to the first checkpoint in 30 minutes and 56 seconds which put him in 21st place.

Reaching the second checkpoint in 1:57:14, he then found himself in 18th place. All that remained after that was the final push for the line.

Arriving in a time of 2:38:48, Ollie crossed the line in 17th place, out of a field of 464, which was a good solid run for him. It was a little slower than the 2 hours 20 minutes he did the year before but as lot of that could be put down to the thick mud and high winds on the day. 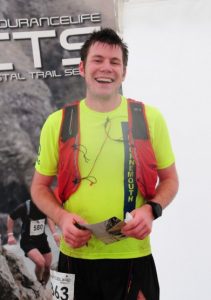 Ollie was pleased with his efforts, especially given that he’d been working nightshifts in the run up to the race and was feeling drained from that

Ollie covered 17 miles in total, so a lot more than would be expected in a traditional half marathon. He also reached an elevation gain of 4,000 ft in the process which gives an indication of how challenging the course profile was. 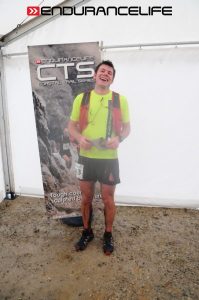