JC leads the way in the CapTEN 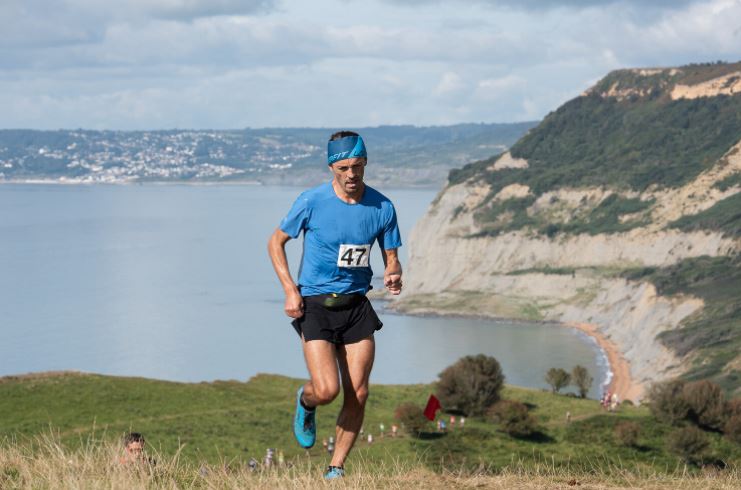 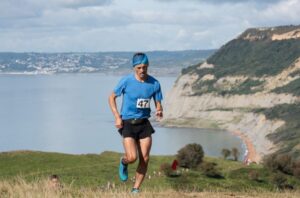 Incorporating the two highest points on the South West Coast – Thorncombe Beacon and Golden Cap – the CapTEN was a race that would have most runners quaking in their trail shoes.

With 2,400ft of climbing to get through over the 10 mile distance it was sure to provide a true test for even the hardiest of trail runners.

The race was organised by Bridport Runners and the route started and finished in Seatown, following the South West Coastal Path over National Trust Land for the most part.

It was essentially a figure of eight course, heading eastwards over Thorncombe Beacon first before looping back on West Cliff above West Bay. Then it was onto the majestic climb of Golden Cap at 626ft and through Langdon Wood before dropping back down to the finish.

To many that would be quite daunting but for Bournemouth AC‘s resident hill specialist, Jacek Cieluszecki, it was something to look forward to rather than to fear.

JC loves a tough climb and really comes into his own on the most challenging of off-road courses. In a race of this sort of profile, there are very few men out there who can match his prowess. 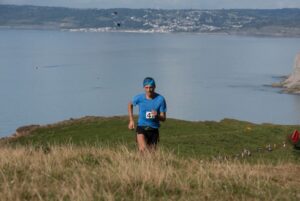 It seems that the steeper the climb the more JC comes into his own
Photo by Sam Rose (samrose.uk)

It was straight into the climbing from the get-go, with the first mile containing 446ft of elevation. Despite the steep gradient, JC managed to get up it at 8:41 minute mile pace and that was enough to put him into the lead.

The second mile was coming back down the hill and that gave Jacek the chance to let fly and extend away, clocking a pace of 5:45 minutes per mile. 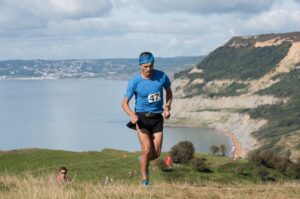 JC was the first man to reach the top on the opening climb
Photo by Sam Rose (samrose.uk)

There was still a fair bit of climbing to do over the next couple of miles but JC amazingly went through those at 6:50 and 6:18 pace before hitting the next big climb on mile five.

That mile featured 405ft of elevation but JC took it in his stride, getting up it at 9 minute mile pace on average. Then it was a fast downhill stretch over the sixth mile before hitting the legendary Golden Cap. 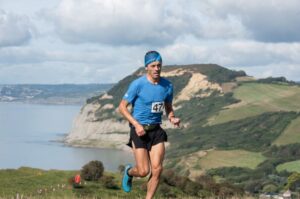 Once he’d taken command of the race there was no stopping JC and his advantage grew from there
Photo by Sam Rose (samrose.uk)

The next mile featured a brutal 570ft of ascent with some hugely steep gradients. JC powered up at an average of just over 10 minute per mile which was mightily impressive.

BAC team captain Rich Nelson went to watch JC in action and he said that Jacek was out in front by a country mile. In fact, when he reached the top of Golden Cap there was literally no one else in sight. Had he not had a number pinned on, you wouldn’t even have known he was in a race. 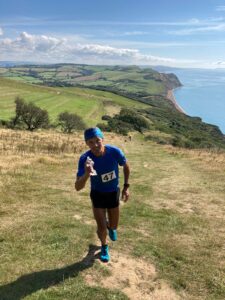 The last couple of miles contained quite a lot of descent and JC tore through those at 6:16 and 5:29 minute mile pace, refusing to let up even though he was so far in front.

That’s one thing you can say about JC. Even if he manages to build up an unassailable advantage in a race, he very rarely goes into cruise mode. That’s how he sets so many course records. He always pushes himself to be the best that he can be, whatever the circumstances. 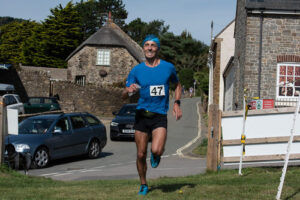 JC comes into the finish looking quite fresh considering the way he tore up the hills
Photo by Sam Rose (samrose.uk)

His finishing time for the race was 1 hour 13 minutes and 29 seconds. It was phenomenal really when you consider that he’d tackled 2,277ft of ascent. His average pace for the run was a flabbergasting 7:21 minutes per mile.

It was a while before anyone else arrived at the finish. Over six minutes in fact. Ben Davidson of Minehead RC took the runner up spot, completing the course in 1:19:50.

Graham Collins took 3rd place in a time of 1:21:41. The first Bridport Runners man arrived in 4th place and that was Jake Hodgetts who reached the line in 1:23:04. 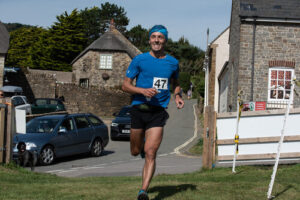 It turned out to be a very comfortable win for JC, demonstrating how strong he is over this sort of terrain
Photo by Sam Rose (samrose.uk)

Becky Tovey of Romsey Road Runners was 1st female, finishing in a time of 1 hour 33 minutes which put her in 14th place overall. The next woman in was Sally Bugler of Bridport who got round in 1:40:30, taking 20th place in the overall standings.

Not only was it a resounding win from JC, it was also a mightily impressive course record which was pretty incredible given that the alterations to the course had meant that an additional hard climb had been added. 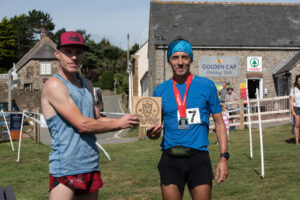 Jacek picks up his trophy for a convincing victory in which he set a fabulous new course record
Photo by Sam Rose (samrose.uk)

It was all in a days work for Jacek though and he saw it as a good training exercise for the tougher races he had in store for the following weekend.

Set to make the trip up to the Scottish Highlands, he would be taking on the Salomon Mamores VK, which was a 5k race featuring a kilometre of ascent over the distance, so it was basically uphill all the way upon very rocky terrain.

Then the following day who would take on the Three Mealls Trail Race where he would tackle a further 2,400ft of elevation over a distance of 18 kilometres.

These were proper fell races that looked just about as tough as it gets, which meant of course that they were right up Jacek’s street.