JC on fire at Hellstone Marathon 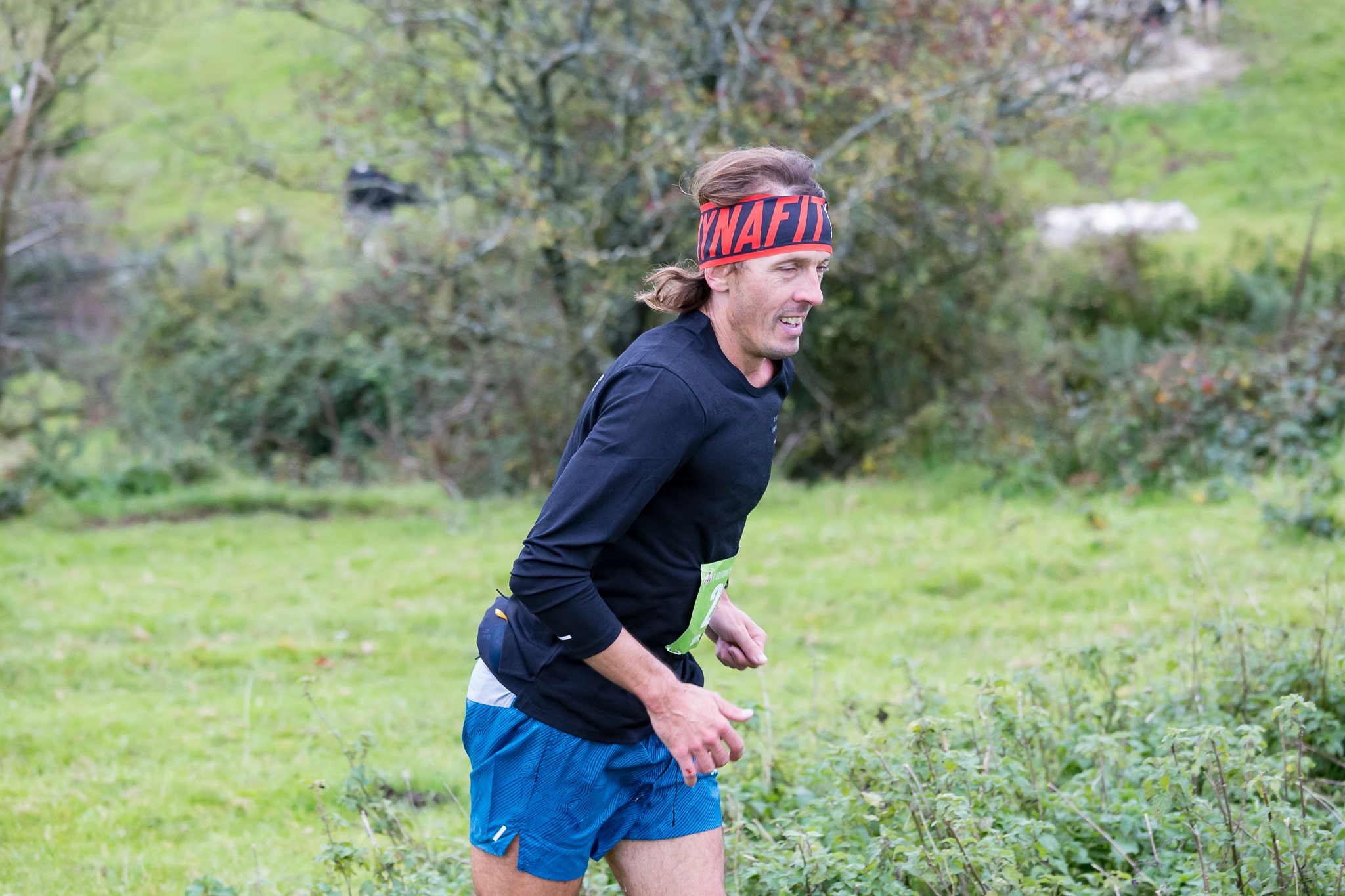 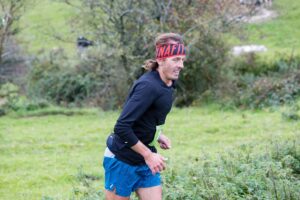 After two wins and two course records in his last couple of races, Jacek Cieluszecki had every reason to be confident going into the Hellstone Marathon

If long, steep, relentless climbs and tough, turbulent, energy sapping terrain is your idea of heaven, then the Hellstone Marathon could be just the ticket for you.

Set in the heart of rural Dorset, the course reveals some of the sensational scenery that the countryside has to offer. It provides challenging yet rewarding proposition for anyone with the courage to take it on.

The wide range of differing terrain across the route certainly keeps things interesting with footpaths, bridleways, farm tracks and fields among the surfaces competitors would encounter along the way.

Tarmac is kept to a minimum with virtually the whole course on trail of some sort. The Hellstone Marathon incorporates 1,169 metres of elevation, so it’s a tough workout for any runner at any level. In fact, it’s challenging enough to earn those who complete it 1 UTMB point.

The event also includes a Half Marathon and, for the first time, it featured a 10k race as well. Staged by Badger Trail Events, the Hellstone Marathon is the sister race of the Dorset Ooser, which was won by Pete Thompson back in August.

That was the second consecutive year that a Bournemouth AC man had claimed victory in the Dorset Ooser Marathon, with Jacek Cieluszecki taking the 2019 win.

This time round Jacek was competing in the Hellstone Marathon and with his track record, or perhaps you could call it ‘trail record’, to be more precise, he was always going to be a leading contender.

Lytchett Manor Striders pair Scott Parfitt and Edward Crawley were also in the mix and there was certainly a possibility they could give JC a run for his money. 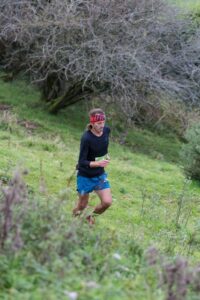 Having completed the Hellstone Marathon in May last year, Kirsty Drewett was back again for more punishment – or perhaps more pleasure – depending on how you want to look at it.

That time she completed the race in just over five hours. This year it was an entirely different proposition though. She hadn’t really been running all that regularly since completing the Larmer Tree 20 back at the end of March. That was just before lockdown came into force and all racing ceased.

Since then she’d only done one run over 14 miles and her total weekly mileage had only twice matched the distance she was taking on in the Hellstone Marathon.

With that in mind she had doubts going into it but she didn’t want to miss out on such a cracking course. Hence, she decided to throw herself into it and see what happened. 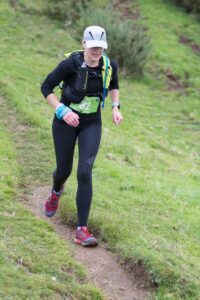 In the Half Marathon race, Helen Ambrosen was flying the flag for BAC. She’d done a fair bit of trail running over the course of the spring and the summer and had really enjoyed it. Hence, she was looking for an event to give her the chance to end the summer on a high and the Hellstone Half Marathon was it.

Coming off the back of two ultra marathon victories, Jacek had been showing some good form going into the Hellstone Marathon. In September he won the EnduranceLife CTS Exmoor Ultra Marathon which was 32.4 miles.

Setting a new course record by over 8 minutes, it was a very successful outing for Jacek in his first race back since the Covid-19 pandemic came into prominence.

He followed that up with another win and another course record in the Exmoor Coast 55km race. That was despite treacherous weather conditions on the day, with high winds and persistent rain compounding what was already a testing challenge.

Luckily it was a much nicer day for the Hellstone Marathon and that would have made it more enjoyable for JC and more manageable for all the participants.

JC wasn’t going into the race with entirely fresh legs though. The previous day he’d been cycling around the Purbeck on a Beryl Bike, following his wife Ela who was competing in the Maverick Jurassic Coast Marathon.

Going through Corfe Castle and onto Kingston, then through Kimmeridge and back to Corfe, he realised that a Beryl Bike was perhaps not the ideal mode of transport for that sort of trip!

Those exertions didn’t stop him going out hard from the outset in the Hellstone Marathon though, despite the difficult climbs he had to face along the way. In fact, the race started with a fairly steep ascent and that was a taster of what was to come throughout.

Considering it was such a hilly route though, JC was still able to go at a remarkable pace. His regular training over the Purbeck is the perfect conditioning for races like this and there are very few men out there who could match him over this sort of trajectory. 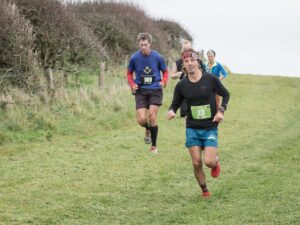 Although it was a very tough course, JC made it look easy as he tore his way round

Those who know JC though will be aware that he often tends to go off track and get lost in these types of races. Usually it’s not his fault though. It’s just that he’d so far ahead of everyone else that he doesn’t have anyone to follow, so if there is a discrepancy with the route somewhere, he is liable to come a cropper.

Sure enough, at the Hellstone Marathon, this was destined to happen again. On this particular occasion, someone had pulled up one of the signs marking out the route and put it in the wrong place, 4 ft away. Then another one had been thrown 50 ft away from its designated post.

Not even a sabotaged course could stop JC though and he still managed to find his way back and make it to the finish line. Even though he’d probably done an additional 1.5 miles, he still ran out a comfortable winner, completing the race in 3 hours 33 minutes and 50 seconds.

That gave him a winning margin of over 7-and-a-half minutes on his nearest rival Scott Parfitt, who finished in 3:41:33. Edward Crawley took third place in 3:45:20.

It was another incredibly impressive display from JC and most certainly a performance to be proud of. Despite an elevation gain of 3,374 ft, he came away with an average pace of 7:18 minutes per mile for his moving time, over a total distance of 28.4 miles. 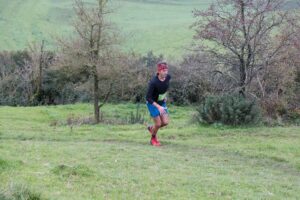 Despite getting lost at one point after some route signs had been moved, JC remained unphased and found his way back

Due to the lack of training and preparation she’d had going into the race, Kirsty wasn’t expecting to produce anything special by her standards. She’d earmarked a sub-6-hour time as a target to aim for.

With it being a trail race, she of course had to concentrate on where she was putting her feet but besides that she found it a sheer joy to be out there. It felt like a wonderful escapism from the reality that is 2020.

The views were epic and far reaching and she encountered a wide variety of livestock and crops along the way, along with obstacles such as gates and stiles. There was certainly plenty to invigorate the mind.

Not only did she make it to the end, Kirsty actually ended up doing a lot better than she’d expected and crossed the finish line in a superb time of 5 hours 10 minutes and 19 seconds. 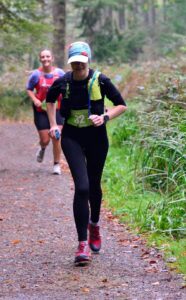 That was enough to put her in 53rd place overall in a field of 108 runners who successfully negotiated the course. That was a fantastic result for Kirsty and it was only 10 minutes over the time she managed last year, despite having done a lot less running than she was back then.

She was 15th fastest female as well and had every reason to be thrilled with that performance. Most importantly though, she had an absolute blast and that’s what it’s all about.

Kirsty felt the organisation of the race and the signage was exceptional, as were the aid stations, and the marshals were hugely energetic and reassuring.

Given her doubts before the race, Kirsty was so pleased that she’d been bold enough to try and do the race. If she hadn’t taken the risk, she would have never known whether she could have done it, so it’s always worth giving it a go. 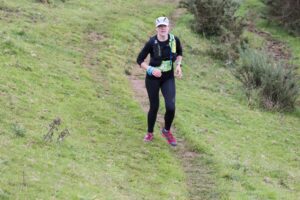 In the mean time, Helen Ambrosen was in thick of the action in the Half Marathon race. She hadn’t run in that part of the countryside before but she was expecting it to be tough – and she wasn’t wrong. At the same time though, it was beautiful and scenic.

She also had to experience the tough uphill start, ascending for the first kilometre before the steep, rough downhill sector that followed. Because of the difficult start, it took Helen a while to get going.

She struggled a bit over the first half of the run but settled down in the second half and was feeling pretty strong by the end. She loved the 1k downhill stretch to finish on, although she wasn’t brave enough to run the steepest bits. 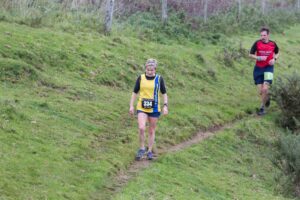 After a good amount of summer training on the trails, Helen Ambrosen was ready for the Hellstone Half Marathon

Completing the course in 2 hours 27 minutes and 26 seconds, Helen came in in 73rd position overall and was 21st female over the line. There were 146 runners in total who completed the Half Marathon.

Andrea Banks of Tynedale Harriers finished in fourth place overall and she was first female as well, crossing the line in a time of 1:42:57.

Helen said she would definitely like to do the event again and it would be good to have experienced the course before and have a stronger run next time. 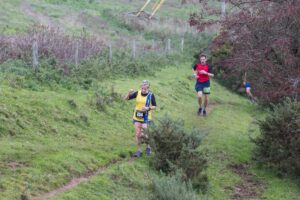 In the 10k race it was Lee Dempster who came out on top, completing the course in a time of 42:54. That was enough to give him a comfortable victory, with Ian Luke of Poole Runners taking second in 46:13.

Once again, huge plaudits have to go to Badger Trail Events for putting on another great race and also to Dorsetbays Photography for capturing the action in all its glory.