JC soars through the dark in Jurassic Coast 100k

Before going into the race, Jacek Cieluszecki had no idea that the Jurassic Coast 100k would prove to be one of his toughest challenges yet

Certainly no stranger to long distance races of a high elevation persuasion, Jacek Cieluszecki has many challenging conquests to his name. He’s tackled the OCC race at the Ultra-Trail du Mont-Blanc, the Eigar 51 Ultra Trail in the Swiss Alps and the Scott Snowdonia Trail Marathon.

In September last year he took on the 7 Valleys 100k in his native country of Poland along a gruelling route that took in some of Poland’s highest mountains. It would be fair to say that he’s more than proved himself in races of this sort of distance across tough terrain.

The Jurassic Coat 100km Ultra was a different proposition altogether though. Starting at 9pm in the evening, the course ran along the South West Coast Path all the way from Chesil Beach in Weymouth to Exmouth in Devon.

Not only was this one of the most brutal routes imaginable in terms of profile, for the vast majority of the race Jacek was running in pitch black with only a head torch to guide him along the Coast Path in the dark. It was always going to be hugely challenging, even for a runner as accomplished and adept as JC.

Nevertheless, Jacek had a race plan and a pace in mind that he wanted to go at right from the start, so as soon as the proceedings got underway, he settled into it. 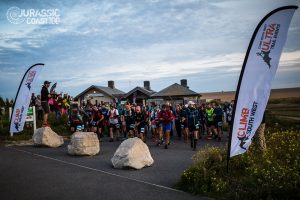 With a massive 100 kilometre slog ahead of them, the runners begin their Jurassic Coast journey, much of which they’d be running through the night

The first eight miles were fairly flat and he was going at between 7:30 and 8 minutes per mile. There was a fairly big incline on the 10th mile but other than that it was fairly smooth sailing up until the 20th mile. That was when the climbing really started.

By that time Jacek had taken command of the race and had already built up comfortable advantage over the rest of the field. It was from that point on though that the challenge really began.

For the rest of the race Jacek was tackling a constant melee of steep, sharp climbs, maneuvering up and down steps, through gates and over stiles.  He found this part of the South West Coast Path was tougher than running in the Alps.

With mountains you tend to get long sections up and then long stretches back down. On the South West Coast Path though the trajectory was constantly changing, with frequent inclines, steep descents, steps and rooted sections. It offered absolutely no respite. And the fact that he was doing all this through the night, in the dark, made it all the more difficult.

One part in particular stood out to Jacek and that was the 7-mile section from Lyme Regis to Seaton under-cliff, passing through Undercliffs National Nature Reserve. It was like an ancient forest and was somewhat mysterious and spooky when going through it in total darkness. They call this section the “Lost World”, although fortunately for Jacek there were no dinosaurs around.

Following the Coast Path signs at night was quite tricky as well and there were some diversions where it wasn’t always clear which way you were meant to go. Luckily Jacek knew the route from Weymouth to Beer, more or less. He did take a few wrong turns over the course of the race but didn’t lose too much time.

Spending the entire race out in front, on his own, it was almost as much of a mental battle as it was a physical one for JC. He showed great intestinal fortitude though to keep pushing and showed astounding strength and stamina to finish the last 10 miles strongly when the undulations eased off a bit.

Reaching the finish line in  a time of 10 hours and 46 minutes, Jacek registered a resounding and dominant victory. Over this type of distance and terrain, there are very few runners out there who could match him. 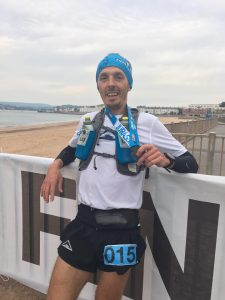 Jacek coasted in for the win, but although he was a long way ahead, it was far from an easy race for JC

Wracking up a total of 9,341ft of elevation, it was one of the most testing courses Jacek had ever encountered and the overbearing feeling after getting to the line was one of relief for him.

52 minutes went past before the 2nd placed competitor arrived on the horizon. That was Martin Hanicinec, who finished in 11 hours 38 minutes to seal the runner up spot. Then a further 32 minutes went by before Paul Dowling came in to take 3rd place in 12 hours 10 minutes. 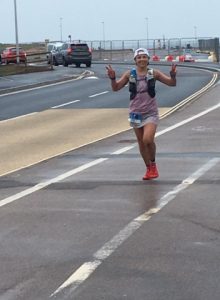 Jacek’s wife Ela also competed, taking on her first ever 100k race. She did extremely well to finish as 3rd lady in a time of 16 hours and 49 minutes. That put her in 21st place overall.

The prize for 1st female went to Sarah Adams who got round in 15 hours and 19 minutes, giving her 10th position overall. She was followed by Carole Loader who completed the course in 16 hours 7 minutes to take 15th place overall. 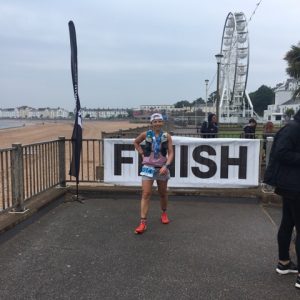 There were 54 finishers in total in the 100k race and making it to the end was an achievement by each and every one of them. A further 15 people failed to make it the end, underlining what a tough and gruelling event it was.

There can’t be too many couples out there who are both capable of running 100k and a double celebration for the Cieluszeckis was certainly in order. They could certainly be forgive for taking some time out to catch up on a bit of sleep first though before getting that party going. 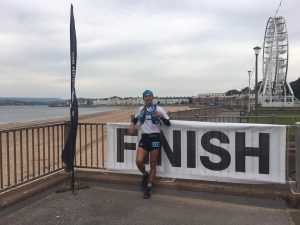 Finishing in 10 hours and 46 minutes, it was a 52 minute gap between Jacek and his nearest rival