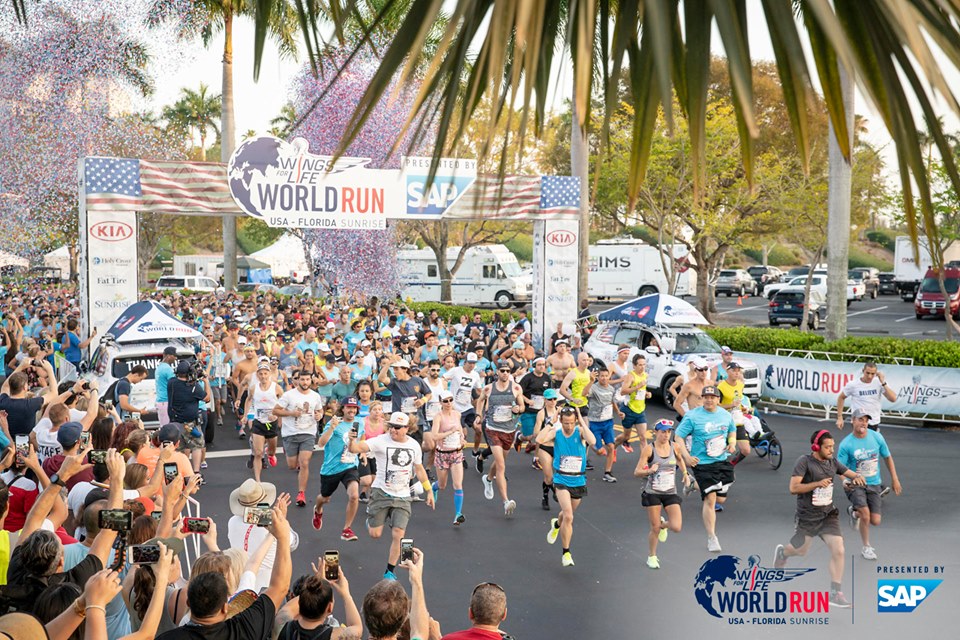 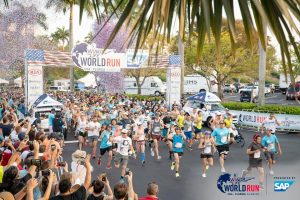 After claiming victory in his previous two outings, Jacek Cieluszecki headed over to Florida for the 2019 Wings for Life World Run

When you think of the world’s greatest car chases, the ones that spring to mind most tend to be from movies. There’s the Fast and the Furious dynasty for example, with it’s ever impressive array of snazzy sports cars. Or there’s been many a classic scene involving the iconic silver Aston Martin driven by everyone’s favourite smooth talking, Secret Service spy, James Bond.

Those of a certain age might also remember Luke and Bo in the General Lee, desperately trying to escape the clutches of Boss Hogg and Rosco in the Dukes of Hazzard. Then there was David Hasselhoff and Kit, his talking car, in Knight Rider. And who can forget the famous black van with a red stripe that harboured the A-Team as they consistently outwitted Colonel Decker and his cronies.

They’ve all provided some exhilarating car chases that make the hairs on the back of your neck stand up. How about we throw a curveball into the mix though? What about the Catcher Car off of Wings for Life World Run rolling after Bournemouth AC‘s resident chase evader Jacek Cieluszecki.

Before 2019’s big showdown, it was two years in the row that JC had ended proceedings as the last man standing in his particular location, meaning he was the one who managed to cover the furthest distance before being eventually caught by the Catcher Car.

It was becoming a bit of a speciality for Jacek. Last year he claimed victory in Melbourne, Australia, where the run happened at night time. Armed with only a head torch and a few gels, Jacek ran for a total of 4 hours and 28 minutes before being stopped, covering a distance of 67.3km (41.8 miles). That was 8th furthest in the whole world that day out of 102,862 people. 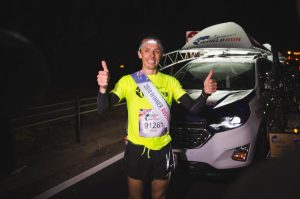 Jacek proved to be the shining star in the night sky at Melbourne last year, winning in emphatic style

The previous year he won at Cambridge in England, narrowly edging out fellow Dorset runner Iain Trickett. Despite being chased by Formula One Grand Prix legend David Coulthard, Jacek managed 68.8km (42.75 miles) that day, running for 4 hours 32 minutes. That put him 12th in the world out of over 86,000 people.

Following up those achievements was always going to tough for Jacek but of course, being a winner in one of the organised location runs, he had free rein of whereabouts in the world he wanted to go for his next one. His choice was Sunrise, Florida. 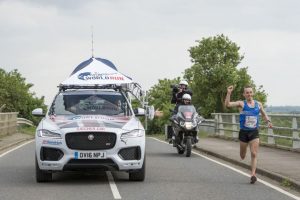 Of course, that gave him and his wife Ela the opportunity to take a vacation in Miami, which was certainly one huge carrot for selecting that location.

On the flip side though, the sweltering heat was liable to make it difficult for all the runners, with temperatures soaring and humidity levels extremely high.

Jacek went out for a short, pre-race jog the day before and it was then that it dawned on him how hot it is. It reminded him of those hot, sticky days we have at the height of summer in the UK.

The level of competition at Sunrise was also looking like it was going to be higher, with the 2019 race attracting several other 2018 winners including fellow Pole Dariusz Nożyński, who was victorious in Poznan, Poland; Karl Aumayr of Austria, who won in Zadar, Croatia and Kleis Mikkel from Denmark, who raced in Aarhus, Denmark.

In a way it was like some of the cream of the crop from last year, coming together to fight it out in the ultimate showdown. Jacek knew he would have his work cut off if he wanted to emerge as the last man standing this time round.

When the gun went off the mark the start of the Wings for Life World Run for 2019, not just in Florida, but in simultaneous locations all around the world, it was Dariusz who assumed the initiative at Sunrise.

Starting off at what appeared to be well under 6 minutes per mile, Dariusz quickly built up a huge gap over the rest of the field. Jacek was in around 6th position in the early stages.

Going at around 6:20 pace for the first 19 miles or so, JC gradually moved up the field until he was in 2nd place. He felt pretty good up to that point. It started to become tough going from then onwards and Jacek’s pace dropped a bit.

The route of the run had taken him onto a lane next to the motorway, with no trees or any kind of shelter from the bludgeoning sun. It was just a long, straight path, with the intense heat sapping away the energy levels.

Despite the treacherous conditions, Jacek demonstrated great spirit to carry on at a pace that was still tremendously quick given that he was going to be surpassing marathon distance quite considerably.

The gap between Jacek and Dariusz was reducing slowly but the advantage he’d taken towards the beginning of the race proved too much in the end.

It turned out to be a Polish invasion of domination in Florida as Wioletta Paduszynska finally got caught by the Catcher Car, taking her place as 1st placed female. Incredibly, she’d finished in 5th place overall at Sunrise. Her distance of 40.49 km put in 27th place in world standings. 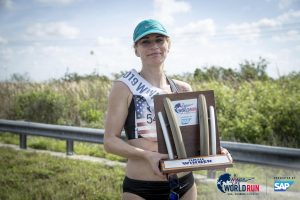 Wioletta Paduszynska of Poland was the female winner at Sunrise, Florida, completing 40.49 km

American Scott Russell was next to be hunted down the Catcher Car, wracking up a total of 41.67 km. That left just three remaining in the race and they were all previous champions from 2018.

The Dane Mikkel Kleis was in 3rd place and he reached 46.94 km before he was eventually reeled in and eliminated. The left just Jacek and Dariusz out on the course.

There was still a gap of over two kilometres between them though when Jacek was finally met his fate. He’d covered an incredible 48.81 km (30.33 miles) and had been running for 3 hours and 25 minutes.

It wasn’t as much as he’d managed in previous years but the speed of the Catcher Car had changed with the regularity of the increases being cranked up. That meant the results were not comparable to previous years.

To be fair though, even if the Catcher Car had gone along at the same pace, with the conditions as they were, Jacek would have been highly unlikely to have reached anything close the distances he did at Melbourne and Cambridge.

Picking up a tremendous victory at Sunrise, Dariusz managed 51.10 km (31.75 miles) before he was finally caught by the Catcher Car, bringing the race in Florida to an end. 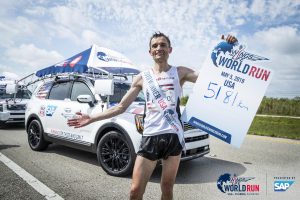 With the conditions as they were in Florida, that did not lend itself to the front runners at Sunrise matching up well against others from around the world. It was simply just so much tougher than in most other locations.

In spite of that though, Jacek had still finished in the top 100 in the world, taking 90th place. Although he was a outright winner at Sunrise, which is one of the most popular locations worldwide, Dariusz only finished 60th in the world, which speaks volumes about how difficult it was in that kind of climate.

It was an enthralling race between the main contenders from around the world though, the Ivan Motorin of Russia eventually running out the global winner. He was running at Izmir in Turkey and covered a grand total of 64.37 km (40 miles).

That was enough to see off competition from the German pair David Schönherr and Florian Neuschwander who were having a great battle for supremacy in Munich.

Schonherr took 2nd in the global rankings, managing 62.88 km with Neuschwander close behind in 3rd with 61.59 km. Two of the pre-race favourites Andreas Straßner and Luis Barboza, both running in Rio de Janeiro finished in 4th and 5th, with Straßner wracking up[ 61.25 km and Barboza 59.93 km.

In fact, it was a double whammy for Russia as Nina Zarina took the women’s global title, running in Zug in Switzerland. She finished with a total of 53.72 km, ahead of Polish lady Dominika Stelmach who was running in Rio (53.46 km) and Nikolina Šustić Stanković of Croatia (52.97 km) who was running in Munich.

Although he had to settle for 2nd place on this occasion, which he doesn’t normally have to do, Jacek had every reason to pleased and proud of his efforts. With an average pace of 6:44 for the 30.33 miles he covered, it was still a mightily impressive run in conditions that are simply not conducive to running those kind of distances.

There were 2,320 runners taking part in the event at Sunrise, Florida, this year. Jacek’s wife Ela also ran, covering 20.45 km (12.71 miles) before being eliminated. She finished 236th at Sunrise and was 62nd female. Globally, she was ranked as 2,416th female.

The Wings for Life World Run is fast becoming the biggest mass participation sporting event in the world. This year over 82,000 people took part and the best thing about it is that it is so inclusive. Anyone can take part, whether running, walking or in a wheelchair.

You can even get the app and run on your own, being chased by a virtual Catcher Car that goes at the exact same pace is all the physical Catcher Cars. Every single result is counted in he global rankings.

It’s a charity event as well and all the proceeds go to Wings for Life Spinal Cord Research Foundation. They then use the money to help develop ways to enable people with spinal cord injuries or disabilities to walk again, or perhaps even walk for the first time. 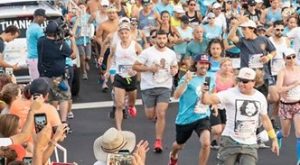 After a gruelling 48.81 kilometres in the blazing Florida sunshine, Jacek was finally stopped by the Catcher Car, taking a superb 2nd place