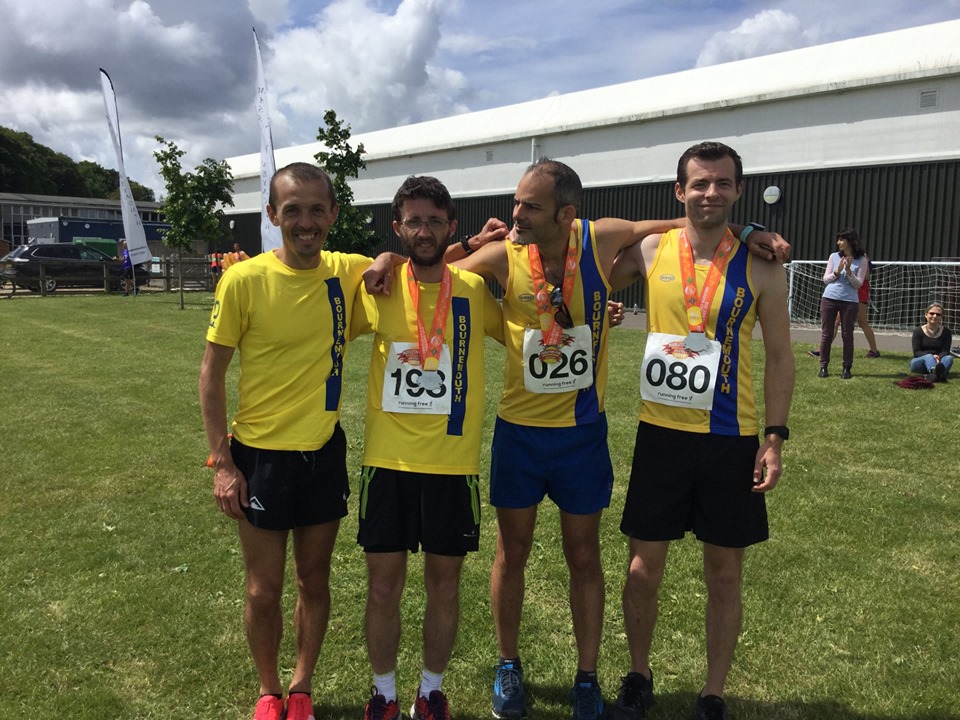 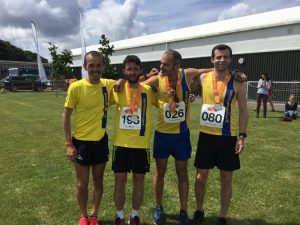 Jacek Cieluszecki, Tom Paskins, Rich Brawn and Matt du Cros were amongst the small team of Bournemouth AC men who made it to the Puddletown Plod Half Marathon

With race entries capped at 300 for the Puddletown Plod Half Marathon it was always going to prove tricky for Bournemouth AC team captain Rich Nelson to get a competitive team together for the sixth fixture of the Dorset Road Race League season.

After a fair bit of toing and froing and some neat juggling though, Rich did manage to assemble a reasonable team as the club continued their challenge for men’s Dorset Road Race League First Division title.

Jacek Cieluszecki and Josh Cole had been drafted into the line-up to add some much needed steel to squad which also included Rich Brawn, Tom Paskins and Matt Du Cros. After Ian Graham pulled out, Wayne Walford Jelks had also taken a last minute entry to complete the team for BAC. 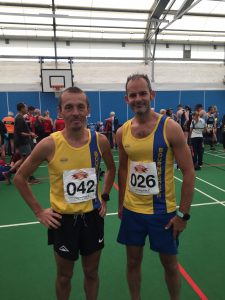 Unfortunately on this occasion there was no Bournemouth AC ladies present so this was going to go down as a throw-away fixture for them. That’s not a total disaster though as the Dorset Road Race League is decided on the best 7 of 12 races, so there is room for a few nil pointers in the season. 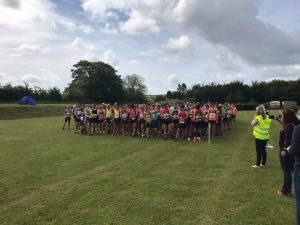 When the race got underway, a lead group of three was established, consisting of JC, Josh Cole and Lee Dempster of Lytchett Manor Striders. Behind them were a few Egdon Heath Harriers, along with Chris Wood of Wimborne. Then slightly further back there was Rich Brawn and Joseph Sherwood of Littledown. 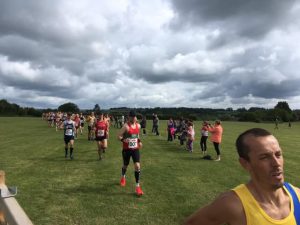 Jacek was one of the main contenders to get the win

Due to work commitments, Josh Cole has been forced to do the bulk of his training over two sessions per week so it was always going to be difficult for him to be at his best over a hilly half marathon route.

As consequence, he was dropped from the lead group, leaving just JC and Lee Dempster out front. They were together for the first four miles, then on the fifth mile, Jacek began to flex his muscles a bit and accelerate away from Lee. From that point on, it was all academic really, as once JC takes the lead in a race, he invariably doesn’t give it up.

Having not really trained much for a half marathon race, Rich Brawn was hoping that he’d be able to tap into the fitness gains he’d made whilst training for the London Marathon. He’d done a couple of long runs the week before but wasn’t sure if it would be enough to see him out for the full 13.1 miles.

High on confidence though after a recent parkrun PB and a 5-mile best in the last Dorset Road Race League fixture, the May 5, Rich started off quickly but knew there was a good chance he’d struggle to maintain the pace in the latter stages. 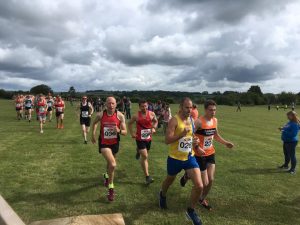 The course for the Puddletown Plod features some good downhill stretches over the first few miles. The kicker is though, you then have to go back the hills over the last few miles, which making it a very testing out-and-back course.

About 6 miles in, Rich was joined by Neil Sexton and John Towner of Poole Runners who had caught him up. Rich has had some good tussles with Neil in recent races so he wasn’t surprised to see him arrive.

The three of them ran together for the next couple of miles but Rich was starting to struggle a touch. The heat was starting to get to him and the relentless hills were quite energy sapping. He could tell from the way Neil and John were running that they were feeling strong.

After about 8 miles, Rich knew he wouldn’t be able to continue at that pace for another 5 miles so decided he’d have to let Neil and John go. As they began to edge away from him, Rich cracked. It was like a cyclist in a grand tour when they suddenly crack in the mountains and get left behind by the group. He felt like he had no fight left in him. 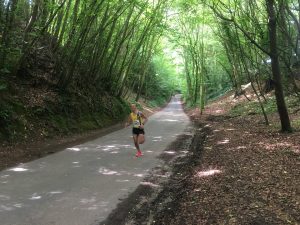 Meanwhile at the front of the race, JC had ran superbly over the first 9 miles at around 5:35 pace, extending his advantage over Lee as the race went on. The real climbing started on the 10th mile and continued up to the end of the 12th mile. 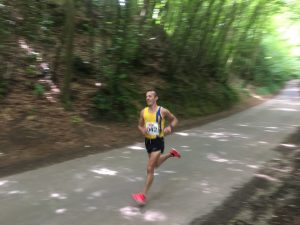 For JC though, the hills were meat and drink and he powered up them well, leaving him with a 1-mile burst to the line. Finishing in a time of 1:13:19, Jacek sealed a strong and convincing victory. Lee came over the line 1 minute and 22 seconds later to take 2nd place in 1:14:41. 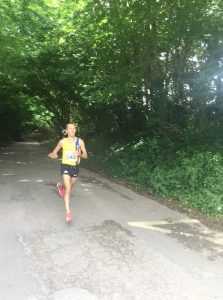 Josh Cole had ran well to hold on to 3rd place, finishing in 1:17:46. Unfortunately he had picked up an injury during the race though which left him limping over the line. It felt like a bad one as well and may potentially keep him out of action for quite some time. 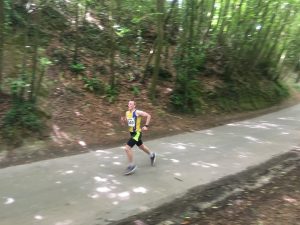 Josh Cole races through for a good 3rd place finish 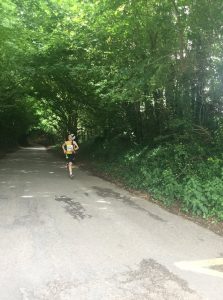 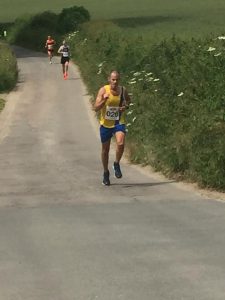 Neil Sexton had had cracking run to take 11th place, recording a good PB of 1:21:50. His Poole Runners teammate John Towner crossed the line in 12th, exactly a minute later. 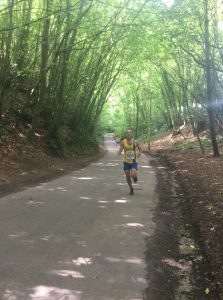 Rich nears the end of a very challenging race

Rich Brawn had found the hills over the last section of the race tough to contend with, particularly the long stretch up from miles 11 to 12. 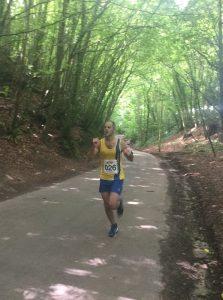 Rich presses on toward the finish in a race that would, in the end, bring him a decent new PB

He mustered up a bit of strength for the last mile though and managed to hold onto 13th place, securing himself a decent new PB of exactly 1 hour 23 minutes. That beat his previous best from the Berkhamsted Half Marathon by 40 seconds. 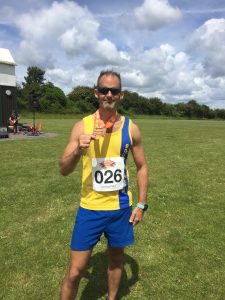 Tom Paskins had been suffering from a bit of a hamstring injury which had prevented him from going as quickly as he might have liked during the race. He’d also been struggling with hay-fever, which was causing him some breathing difficulties and the Puddletown Plod course is generally quite unforgiving for an infliction of that sort.

As a result Tom was well below what he would usually be capable of in a half marathon, crossing the line in exactly 1 hour 27 minutes, putting him in 28th place. Unfortunately, three more Egdon Heath Harriers had come in in the three minutes between 1:24 and 1:27, as well as four Littledown Harriers. 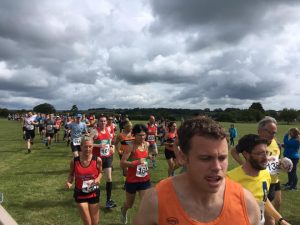 That saw Bournemouth AC pushed down to 3rd in the Dorset Road Race League, with Egdon taking out the win and Littledown sneaking in for a surprise 2nd place. It certainly not the result the BAC team had been expecting.

Having not run a great deal since his North Dorset Village Marathon, the Puddletown Plod wasn’t exactly a race that Matt du Cros was relishing. He’s aiming to complete all 12 of the Dorset Road Race League fixtures this season though so, having completed the marathon, he wasn’t about to let that record slip. 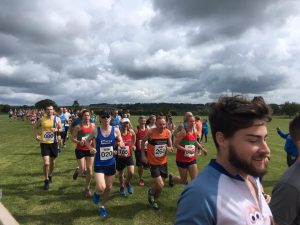 An ever-present in the Dorset Road Race League thus far, Matt du Cros (080) had a record to keep up

As a result, his aim was simple and that was just get round unscathed. Starting the race off very conservatively, he began to grow in strength as the race continued. Over the latter stages, he found he had a lot more energy left, finishing with a strong last few miles that propelled him up the leader-board. 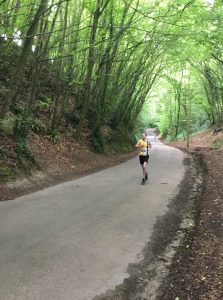 Matt was feeling strong toward the end of the race

Reaching the line in 1:35:13, Matt ended the day as 5th scorer for Bournemouth AC, taking 49th place overall. After the race he couldn’t help feeling that he should have gone off harder in the early part of the race. Since he’d had so much left at the end, he knows he could have done better if he’d got the strategy right. 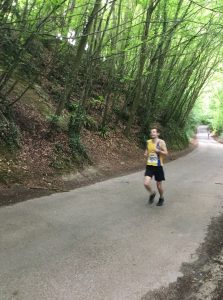 In the women’s race, it was Isobel Rea of West 4 Harriers who took out the win, crossing the line in 1:27:38. That put her in 30th place overall. Alexandra Door of Egdon Heath Harriers found an opening to take 2nd place in a time of 1:32:50, putting her in 43rd place overall.

That meant current league leaders Poole Runners found themselves languishing in 4th position for that particular fixture. They still of course had a commanding lead over the season thus far, with Egdon Heath remaining in 2nd and Bournemouth AC staying in 3rd, just above Littledown. 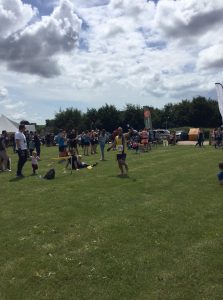 Although he found it a struggle with minimal training behind him, Wayne Walford Jelks still managed to make it round, crossing the line in 2:08:05 to put him in 215th place overall. It may not have been one of his fastest races but it will serve as a good starting point for Wayne in his bid to recover his fitness. 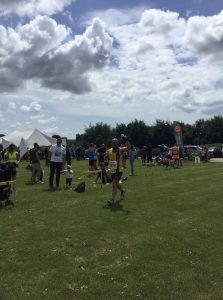 It was a tough race for Wayne but he got through it, giving himself a good base to build from for future races

In the league standings for the Men’s First Division, that win had brought Egdon Heath Harriers level with Bournemouth AC at the top of the table. It is looking increasingly like they will provide a strong challenge to BAC throughout the season so it should be an enthralling battle between the two for the coveted Dorset Road Race League title.

That also meant it would be all to play for in the next league fixture, the Pubeck 10k, with each race potentially proving vital in deciding the who will emerge as this year’s champions. 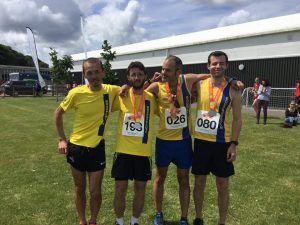