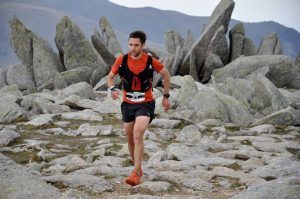 The Berghaus Dragon’s Back Race is regarded as the world’s toughest 5-day mountain running race covering a total distance of 315 kilometres and featuring 15,500 metres of ascent.

This was the task that Jez Bragg faced as he set off early Monday morning for the first of five gruelling stages of running, or in some cases climbing up the mountainous spine of Wales from the north to the south of the country.

It was an event that would test the resolve of even the very finest runners and adventurers who dared to take on the challenge. With some of the route across dangerously high and rocky terrain, sometimes with very low visibility, it was a race designed to push the competitors to the very limit of human capability, both physically and mentally, as well as technically.

The first stage was the shortest of the five, although it doesn’t sound short, with 52km to cover but with the highest ascent of any stage at 3,800m. Jez got off to very solid start, completing the course in just under 8 hours and 29 minutes which put him in 5th place overall. out of the 223 competitors who started the race. 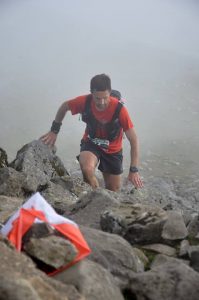 Jez scales the rocky mountains from northern to southern Wales

The second stage was 58km with the 3,600m ascent. Jez had an even better day on this one, completing the course in the 3rd fastest time of anyone, 8 hours and 46 minutes.

Day 3 looked on paper the toughest stage, with a distance of 71km and an ascent of 3,500m. Again, Jez kept it steady, finishing in 5th place with a time of 9 hours 36 minutes on a day where only 6 minutes separated Jim Mann who was 2nd fastest on the day to Jez in 5th. 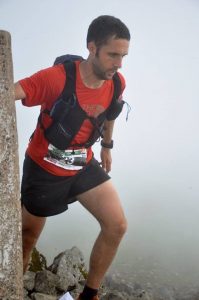 Day 4 was another mammoth 71km stage but the was less of ascent on this one of just 2,400m which meant that, although there was a few days of mountain fatigue in the legs, it could still be completed a little quicker than the previous day. Jez clocked the 6th best time of the day in 8 hours and 51 minutes.

On the 5th and final stage, which was the flattest and fastest of them all and was a staggered start according to the overall time gaps of each competitor. This meant that whatever position they crossed the line in on the day would be their placement in the final standings. 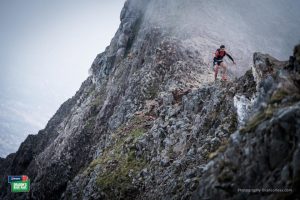 Unfortunately Jez slipped a little from the extremely high standards he had set in the previous four stages, finishing 14th quickest in just under 8 hours 27 minutes. It didn’t matter though as he had an advantage of over 2 hours on the next placed runner.

This meant Jez finished in a magnificent 5th place overall, with a total time of 44 hours, 10 minutes and 15 seconds. In such a high standard field, this was an incredible achievement from Jez and one he will no doubt look back on with tremendous pride. 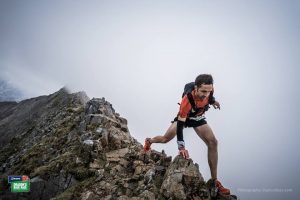 Only 127 of the 223 that started actually managed to complete the full race, which gives an indication of the unfathomable difficulty that it presented, even to the most experienced and accomplished ultra runners.

Not only did Jez complete it though, he excelled in it, proving what a phenomenally talented and fiercely determined distance runner he is.

An amazing 5th place finish overall for Jez made the most extreme and brutal journey well worthwhile, as did the breath-taking scenery