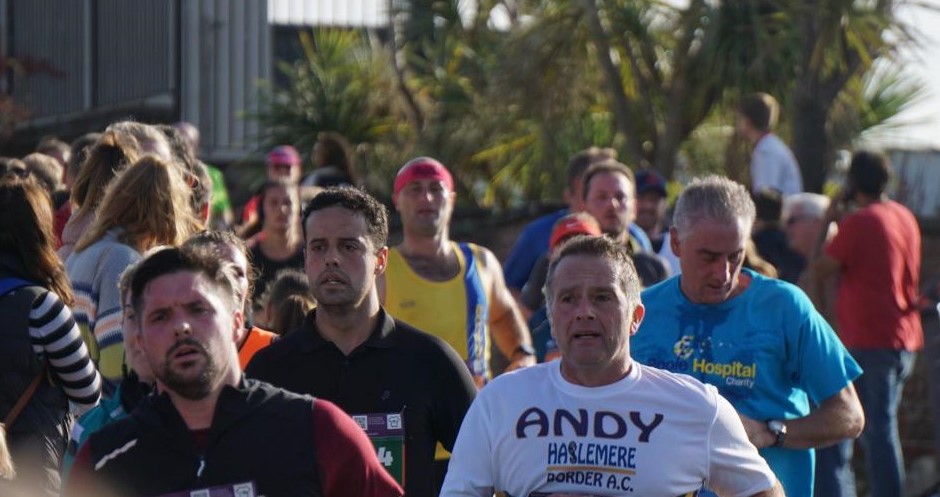 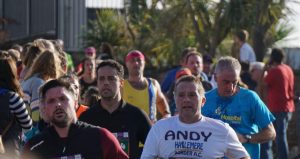 John Preest and Stephen Ross were amongst over 2,000 runners who lined up for the full Marathon at the 2019 Bournemouth Marathon Festival

The showpiece event of the Bournemouth Marathon Festival weekend itself was of course the Marathon itself. Just as the Half Marathon does, the route starts off from Kings Park and heads over toward Southbourne and down to Hengistbury Head before directing toward Boscombe.

Some sections are on the Overcliff and some along the promenade as the route eventually leads over to Bournemouth Pier where the runners cross the finish line for the first time.

They haven’t finished the marathon yet though when they do that. That’s only 18 miles in and they still have to conquer the BIC Hill and some ups and downs around West Cliff and Alum Chine.

It ends by heading over to Sandbanks before turning back for the last stretch along the promenade to Bournemouth Pier where the runners then reach the finish. 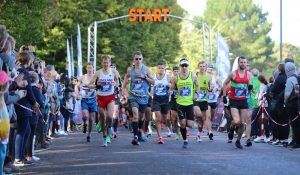 It was a testing route with some difficult hills, as well as a noticeable headwind on certain sections of the seafront. The only official Bournemouth AC representative was John Preest, who completed the full 26.2 miles in a time of 4 hours 13 minutes and 16 seconds.

That was a minute-and-a-half quicker than he ran in the Brighton Marathon in 2018 so all things considered it was a good result for John. His time put him in 797th place overall and he was 112th in the Male Over 45 category.

Also taking part in the BMF Marathon was Stephen Ross, who regularly trains with BAC on the Tuesday night interval sessions. He wasn’t doing it with intention of running as hard as he possibly could though. He was doing it primarily to raise money for charity and just to have run really.

Dressed up in the iconic image of Forest Gump, when he was on his famous run across America in the film, Stephen coasted along looking very strong and controlled throughout the race.

The speed he was going at wasn’t particularly quick by his standards but it was still a tough marathon to complete and still a good achievement from him to finish in a time of 3:35:32. That put him in 247th position overall, not that that really mattered to him much though. 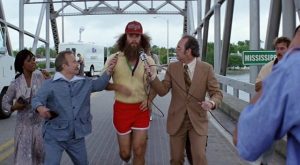 Stephen Ross took inspiration for his costume from Forest Gump in the famous scene where he runs across America. Run Stephen run!!

Stephen has since officially joined the club and found himself running in the Hampshire League Cross Country fixture at Kings Park, where he did very well to finish as fourth scorer for the team. And that was despite having a full marathon from six days prior in his legs.

Several other Bournemouth AC members were out on the course supporting, popping up in various places from time to time. Chris O’Brien ran the last 6-and-a-half miles of the course with a friend of his from Verwood Runners.

Rich Brawn joined his friend Sophie Routledge, who runs for his former club Dacorum & Tring, for a substantial part of the race. Despite having already covered 7 miles to get to Kings Park twice and run with Raluca for part of her race, Rich was with Sophie for the first 6-and-a-half miles.

He was intending on meeting her just before she hit Boscombe Gardens on mile 12 as well but he arrived too late and missed her, deciding to then rendezvous with her on the promenade instead when she came back down. 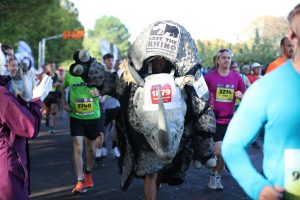 One of the famous rhinos often seen participating in marathon events was present, raising money for the Save the Rhino charity

He ended up accompanying her on the latter 12 miles of her run as well which brought his total mileage for the day up to almost 26 miles.

Unfortunately, Sophie was suffering from a knee injury which reduced her to a run/walk approach for the last 10 miles or so. She still ended up finishing in a time of 4:15:37 though which was only 26 seconds off of her PB.

The first female over the line was Gill Bland who finished in 2:59:36, putting her in 34th place overall. Then it was Jen Granger who completed the course in 3:00:30, giving her in 36th place overall. Juliet Champion took the title of 3rd lady, clocking a time of 3:02:57 which put her 43rd in the overall standings. 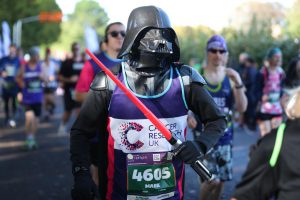 Darth Vader was also out there, using the force to get round the energy sapping course

A total of 2,131 participants successfully completed the BMF Marathon, in what seems like it may have sadly been the last year for that particular race. The Bournemouth Marathon Festival event has been rebranded as Run Bournemouth for 2020 and will not be featuring a full marathon.

What really made the Marathon and Half Marathon races special though was the incredible support out on the roads and along the seafront for all the runners taking part. That would have made a huge difference to them, particularly in the marathon where it tends to become a bit of a struggle over the latter stages of the race.

It’s an event that demonstrates what a true sense of community there is throughout Bournemouth and with so many people coming out to cheer the runners on on every section of the course, the atmosphere was electric all the way from start to finish.