Jon Sharkey competes for his country over 100k, North Dorset Village Marathon, Parkruns and the BAC vest in Spain 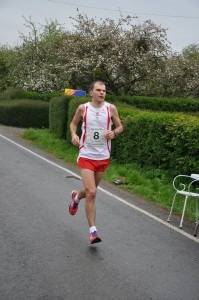 Jon Sharkey competes for England in the Anglo-Celtic 100k Plate

For the second year running, Jon Sharkey was a member of the winning England team competing in the Anglo-Celtic 100k Plate competition which, this year, took place at Redwick, Wales on Saturday 2 May. Jon has quickly established himself as one of the country’s leading athletes at this distance, a journey which started with a 50k run in late 2013 to gain a qualifying time for consideration for last year’s Anglo-Celtic Plate, which he succeeded in doing despite minimum training, and, of course, selection for the England team for 2014 followed. Jon’s time last year ensured his selection for the competition this year on 2 May, when he finished an excellent fourth, in a time of 7.15.35, a ‘B’ standard for GB’s World Championship Team, and knocking some 8 minutes off last year’s time.  Jon is one of BAC‘s band of international athletes, the others being Steve Way and Pat Robbins, and we are very proud of Jon and all that he is achieving. 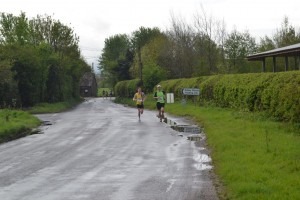 Nikki Sandell on her way to a win in the NDVM

The next day, Sunday 3 May, the North Dorset Village Marathon took place, and congratulations to the two BAC ladies who competed, namely Nikki Sandell and Caroline Rowley.  Both Nikki and Caroline had run a week earlier in the London Marathon, and Caroline less than a week before that in Boston, thus completing three marathons in less than two weeks!  This means that Nikki‘s achievement in winning the ladies’ (all the ladies – not just the Vets!) race is all the more remarkable, Nikki‘s time being 3.16.04 in 18th overall position (Nikki‘s PB in London was just over three hours).  Caroline, having run just over 3.30 in both Boston and London, was surely pleased with her 90th position (of a total of 275) and time of 3.50.58.  BAC‘s men, also, put in good performances with two PBs.  Ben Walliman was the first of our men to cross the line, 22nd in 3.20.28, and in 46th was Tony Hunt in 3.36.45 and 96th was Steve Cox in 3.53.46.  Both Steve and Tony ran PBs. 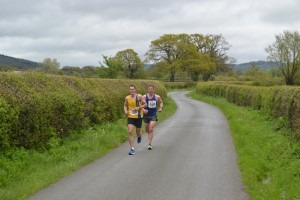 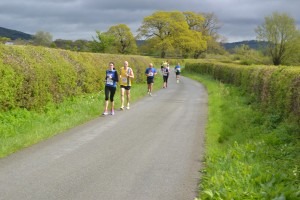 Tony Hunt approaches a PB in the NDVM 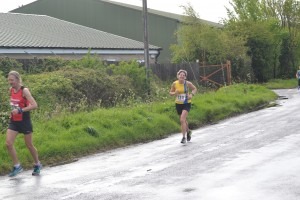 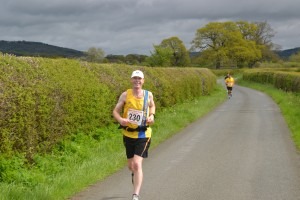 Steve Cox on his way to a PB in the NDVM

Back to 2 May, and Billy McGreevy, recovering from his London Marathon run, was second in the Bournemouth Parkrun, in which Jud Kirk, Joe Price and Eddie Suthers (one of our youngsters) also ran.  Anthony Clark also appears to be recovering from his excellent London Marathon run, finishing 6th in the Poole Parkrun, with Ross Smith 8th and Paul Consani 9th.  Parkrun numbers are huge these days, with 390 finishing in Bournemouth and 634 in Poole. 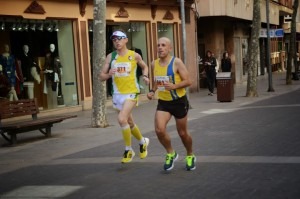 Antonio Ruiz runs in a ‘carrera urbana’ in Ciudad Real

Meanwhile, Antonio Ruiz, who ran for BAC a year or to ago, and helped with the Junior Development Group Wednesday evening training, continues to display his BAC vest in Spain.  Recently, proudly wearing the vest, Antonio ran 36.44 in a 10k race in Ciudad Real.