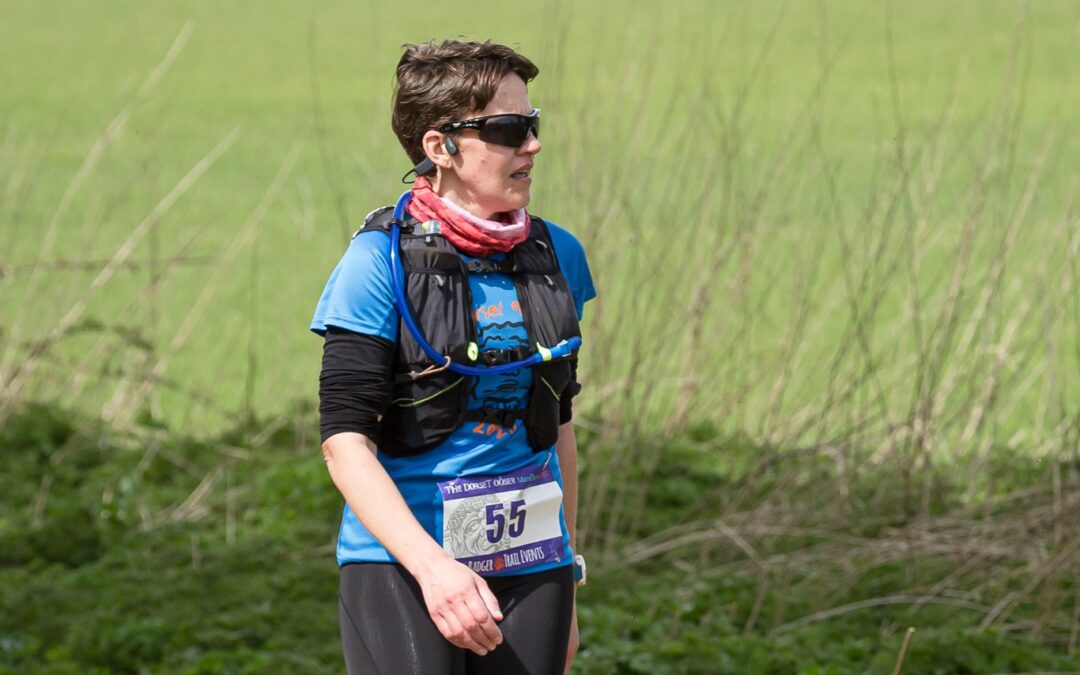 Going into the event off the back of a fairly low mileage, due to being post-virus, Kirst Drewett‘s expectations for the Dorset Ooser Marathon weren’t high. Her aim was simply to enjoy herself and she was prepared to pull out once it started to become hard work.

The Dorset Ooser Marathon starts and finishes in an ancient thatched barn in Turners Puddle – a small hamlet in the heart of Dorset. The course takes the runners along a lovely, scenic, countryside route following farm tracks, fields, trails through ancient woodlands and old hidden holloways. Passing through picturesque hamlets, managed woodland tracks and heathland, it really encompasses all that the Dorset countryside has to offer.

What’s the catch? Well there are 13 hills to get up and over on the marathon route, amounting to around 1000m of elevation. Plus seven stiles to negotiate, two fords to cross and usually a fair bit of mud to slip and slide through.

It’s a race where Bournemouth AC runners have traditionally performed well in, with Jacek Cieluszecki winning it in 2019 and Pete Thompson prevailing in the 2020 edition.

Knowing it was organised by Badger Trail Events was a comfort to Kirsty because she knew it would be a great route but also that the race HQ and the signage would be good and that she’d get the support she needed whilst out on the course. That made her feel safe enough to get out there and give it a go and in the end, she was very glad that she did.

It wasn’t Kirsty’s first time doing a race of this sort though. She did the Hellstone Marathon last October which is another Badger Trail Events one. She’s also done the Dorset Ooser Half Marathon before back in 2019, so she pretty much knew what she was in for.

The hills start immediately and they don’t really stop until you reach the finish. It was a beautiful day and Kirsty had the most enjoyable run she’s had in a long time. She just bimbled along and immersed herself in the surroundings.

There was an equestrian event on in the same area and she walked a bit when she came across a few riders on a narrow bit of track. In general though, she felt okay. 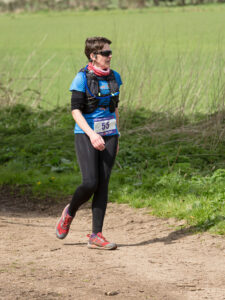 Thanks to Dorsetbays photography for capturing the action so brilliantly

For the last nine miles though, she felt strong and was working her way through the field. It was definitely the best she’d done in judging her effort over that distance and it was very rewarding.

Completing the course in 5 hours 17 minutes and 16 seconds, Kirsty was 89th out of 159 who successfully completed the mammoth marathon mission.
That made her 24th fastest female. It was just one of those days where everything falls into place and she hit an absolute purple patch.

Matthew Bewley of Zoom Triathlon Club was the winner, getting round in 3:23:22 which out him six minutes ahead of Kevin Drayson of Westbourne who was second in 3:29:21.

Patrick Kingston of Ealing Eagles took third place in 3:42:50. Virginie Morris of Dorchester RIOT was first female, coming in 9th overall with her time of 3:51:25.

Kirstin Hay of Poole AC was the next woman over the line, taking 14th place overall in 4:00:52. She was followed by Karen Mitchell of Dorchester RIOT who was third female and 25th overall in 4:14:51.

Kirsty’s total elevation for the run reached a massive 2,785ft which illustrates how tough this race actually is. That’s what Kirsty loves about running though. She enjoys a tough route that is going to take her to the limit and the Dorset Ooser Marathon certainly does that.