In her last big race of the year, Linn Erixon Sahlström was in Wales for the Beacons Ultra – a 50 mile race that she astonishingly classes as a “fun run”

How do you follow up a 123.4 kilometre TDS race that forms part of the famous Ultra-Trail du Mont-Blanc event, featuring an elevation gain of 6,800m? It’s not easy because the UTMB is the very pinnacle of the ultra-distance, mountain running realm and once you’ve been there and had that experience, there are very few races that can provide that same buzz, or even anything close to it.

Linn Erixon Sahlström had found it difficult to mentally recharge from the TDS, which she completed two-and-a-half months ago and consequently her training since then has been pretty minimal.

She had hoped that with the prospect of her next race on the horizon, she’d be able to get herself in gear and find that motivation again but it hadn’t happened. It was a good job then that her next conquest was only a “fun run”.

Well, I say “fun run”, by that I mean 47 miles through the Brecon Beacons!! In the crazy, extreme distance, ultra-running world that Linn has become a part of, that does almost qualify as a “fun run”.

By virtue of the fact the Beacons Ultra was ‘only’ a 47 mile race, Linn knew it was going to be a fast one in comparison to the TDS and some other of the other longer races she’s done such as the Jurassic Coast 100 miler that she completed back in June.

Originally her aim was to get a top three finish but seeing as she’d only ran a total of 50 miles over a two week period in the lead up to the race, she was forced to reassess her aims and switch the target to just completing the course. With minimal training behind her, that alone was going to present enough of a challenge.

The longest training run she’d done in preparation for the event was a 10 miler, so once she got beyond that in the race, it started to hurt. Managing to tap into the ultra mindset, she managed to push through the first loop of the two loop course, arriving at the half way stage in just over four hours. That was actually bang on target for Linn and put her in 55th place overall.

At that stage she felt like dropping out though. She wasn’t enjoying it and was finding it difficult to stay motivated but she had no real reason to drop out. She didn’t have any injuries and the aches she did have were manageable. Plus her crew told her that abandoning the race was not an option.

She went out for the second loop knowing that she would actually finish. It was now just a case of embracing the run and enjoying the wonderful scenery that comes with it. The sun was out now as well and some of the views were sensational. 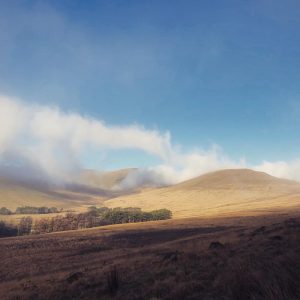 Although she was in a bit more of a positive frame of mind by this point, there were a few sluggish drags that were very mentally draining. She also fell over a couple of times because of fatigue, which is something that very rarely happens to Linn.

She managed to dig deep though and summon up her Viking spirit to help her get through the tough moments. She even managed to pick up some speed over the last 15 kilometres and finished strongly, crossing the line as the winner of her own battles.

With a finishing time of 8 hours 45 minutes and 41 seconds, she took 51st place in a field that to begin with contained 241 runners. Only 209 of those runners successfully completed the race, which gives some indication of how tough it was and how much character and tenacity it takes just to get to the finish line.

Linn arrived at the finish in 51st place overall and she the 6th woman over the line, clocking a time of 8:45:41

Considering she wasn’t really in the right place, either mentally or physically, for this race, Linn actually did really well. She was the 6th woman over the line, which was a commendable result, and she’d racked up 5,564ft of elevation throughout the course of the race.

The top ladies in the race were all renowned for their speed and all five of them were under the age of 30 as well, which made Linn feel pretty good for finishing where she did, even though she wasn’t sufficiently trained for the task.

Races of around the 50 mile mark tend to favour the young, or the former marathon runners, as they have the speed to get round quickly. Linn knows that her main strength lies in endurance, rather than speed, hence she tends to fair better in longer races.

It does sound strange in a way to think of 50-mile races as being short and fast but that’s where Linn is at in her running. She favours races that are much further in distance than that, such as the 100 kilometre and 100 mile variety.

That said, it can be an exciting challenge for Linn to do one of these “fun runs” as she calls them, ever once in a while, just to get those legs spinning a bit faster. Next time she’ll do it a bit earlier in the season though.

She’s made a mental note not to do any more races in November again as her body and mind both need a break from running competitively. Those are the learnings she will take back with her from her Beacons Ultra experience.

That’s it for Linn now. She’ll be signing off for the season now, allowing herself some time out to rest and reflect on what has turned out to be an excellent season for her, all things considered. Then it will be time to make some exciting plans for next year’s adventures. 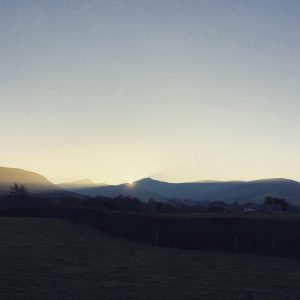 As the sun sets on her season, as far as competitive races go at least, Linn can look back on her year with immense pride at what she’s accomplished