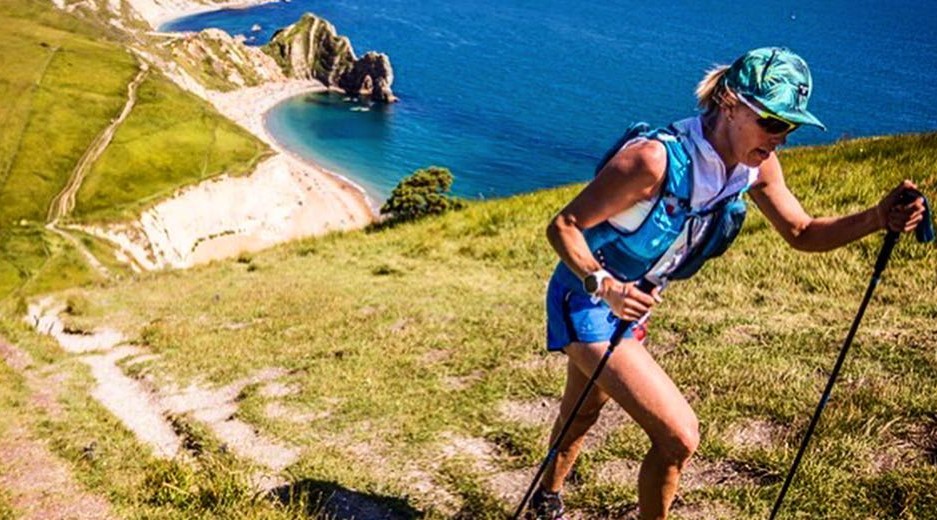 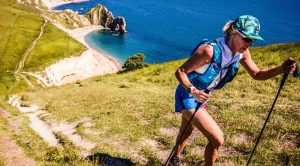 All that stood in the way of Linn Erixon Sahlström reclaiming her Jurassic Coast crown was a measly 110 miles of Coast Path and 15,800ft of elevation. What could possibly go wrong?

Defending a title you won in the previous year of a really big race is always difficult. It’s always a danger that if you anything less than a victory could seem like a disappointment. However, every race is a new journey and a new experience and that is what matters most to Linn Erixon Sahlström. It’s not all about the end result.

She wanted to go back to the Jurassic Coast 100 Mile Ultra and possibly have a stab at beating her previous best time but above all she wanted it to be a less painful experience. She wanted to smile more and cry less and generally just enjoy it more.

She knew someone would have to try and break the time of 27 hours and 46 minutes that she registered in last year’s event. She wanted to improve on that, as opposed to just racing for 1st place.

It’s difficult though as, once the race gets going and the adrenaline starts pumping, you tend to get caught up the spirit of the competition and that instinct to be the best takes over.

From the start of the race, it was Karen Fronteras who took the bull by the horns, setting off at a blistering pace, despite the fact that it was a hot day and she had a gruelling 100-mile run ahead of her.

Linn could only try her best to stay close behind her but that almost killed her over the first 10k. She realised she was going to have to let her go and wish her all the best. If she was able to sustain that crazy pace throughout the race she would be a worthy winner, no question about it.

Karen even ran up all the hills from the beginning which is something that is not recommended unless you’re a super elite athlete.

Needing to calm her heart rate down somewhat, Linn tends to struggle a bit in the heat. Luckily she found a guy to trot with whom she’d met during training and they ran at a nice equal pace for three to four hours.

At around the half way point, Linn accidentally passed Karen who had gone the wrong way. At the Chesil Beach checkpoint, which was around 45 miles in, Linn had a freshly made burger from her lovely crew who served her food throughout the run since the food stops from the race organisers offered next to nothing. 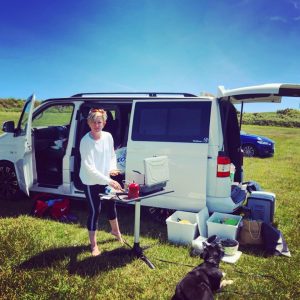 Linn waited until Karen left and then followed her straight out to see what sort of pace she was going at. After 500 metres though, Linn had to go past Karen after she stepped aside on the trail, clearly beaten by the heat and all of her previous exertions.

As she went past, Linn could feel Karen chipping at her heels and she had to get her game face on and show determination not to let Karen pass. The victory was hers to take and as they reached the half way stage, it was very much game on.

After that Linn began to pull away from Karen and a gap opened up between them. The problem now for Linn was that she didn’t know how far behind her Karen was so she couldn’t really afford to let up at all. In a way that was kind of a fun situation to be in in a 100 mile race.

In the middle of the night, whilst passing through Charmouth, Linn heard some people shouting and it sounded like they were screaming her name. As she got closer though, it turned out they were off their heads and one of the guys lashed out at her on the street, hitting her with both hands in a total rage.

Linn blinded him with her head torch and he tried to hit her again but missed, only making contact with her backpack. She waved her poles in desperation but after almost 15 hours of running she was feeling a little dazed so her reactions were quite slow.

It was a scary experience for Linn and to make matters worse she destroyed her head torch afterwards as well whilst trying to put it back on, probably in state of shock. Luckily they carry spare head torches though to account for occurrences like that.

The good thing was, she was now not scared of going through the under-cliff from Lyme Regis to Seaton, or the “Lost World” as they call it. That was a 6-mile stretch across rooted ground, rather like a rainforest. Last year that section freaked her out a bit but this time she was more confident and feeling stronger in the legs.

With around 20 kilometres to go Linn picked up Darren Curtis-White  who, much like her, was going through a rough patch. It was Darren’s first 100 miler and he and Linn both benefited by helping each other out over the latter stages of the race.

Usually Linn tends not to stick with someone for long periods of time. She likes time on her own. However, when you meet someone who is good company and makes you use your best engine, you stick with them.

Crossing the line together in joint 6th place overall, Linn and Darren finished in a time of 26 hours and 37 minutes. She had successfully defended her title and once again finished as 1st female which was a great feeling for Linn. 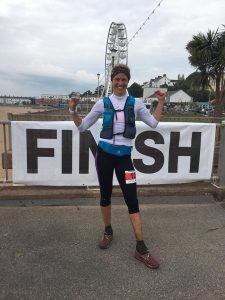 She did it again!! Linn ran out as 1st female, conquering the 110 mile route over an hour quicker than she did last year

Arriving 1 hour 45 minutes later, Karen came through to take the runner up spot, finishing 10th overall in a time of 28 hours 18 minutes. Then, a further hour behind her, Simone Durry came in to take 3rd place in the women’s race, with a time of 29 hours 22 minutes.

Feeling strong throughout the race, Linn had loads of running in her legs and had a beautiful day and night out on the trails, smiling and enjoying it for the most part.

What’s more, she beaten her time from last year convincingly, shaving 1 hour and 9 minutes off her time. That was quite some achievement.

By the end of the race, Linn had covered over 110 miles and had reached an elevation gain of 15,810ft. It was an obscenely tough race, make no bones about it but Linn is becoming such an accomplished ultra runner in the way that she handles the extreme challenged that races like this present. 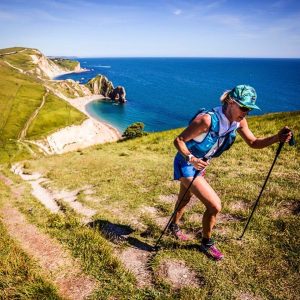 Linn was eternally grateful to her partner Shelley Davies, who logistically aced the race navigating a van around the small country roads through day and night. She not only provided Linn with electrolytes and water but also a freshly barbequed bacon sandwiches and burger.

It wasn’t just a win for Linn personally, it was really a team effort and she thoroughly appreciated the support she got from her crew.

The overall winner of the race was Daniel Miller who went over the line in 21 hours and 24 minutes, taking victory by quite a considerable margin. Euan Ross took 2nd place, arriving three hours later to register a time of 24:28 with John Howard taking 3rd in 24:59.

Linn is now recovering but is slowly building up to this year’s big adventure which is going to be the Ultra Tour Monte Rosa. That is another 100 mile race, featuring over 11,500 metres of elevation and an average altitude of 2,000 metres.

That means it’s back to the dreadmill and the Purbecks for Linn and this time with a weight vest and a training mask in order to simulate running at altitude. 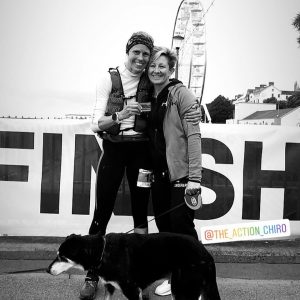 Linn celebrates her remarkable run with Shelley and Sir Tabor, the dog