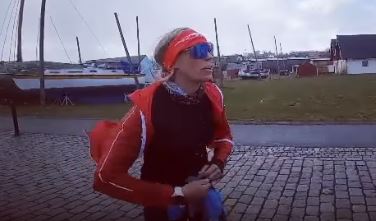 With the prospect of her forthcoming South Downs Way 100 mile event looming large on the horizon, Linn Erixon Sahlström continued her race prep by heading back home to Sweden for the Österlen Spring Trail 60km Ultra.

It was only three weeks after she’d completed her Lulworth Cove Trail Challenge 54km race so she hadn’t had a lot of recovery time and wasn’t fully fresh for it. 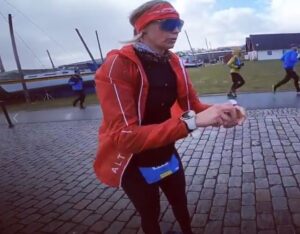 It was the first time she’d raced in Sweden since 2011 so there was always a possibility that the weather would enhance the challenge somewhat by placing her in conditions she hadn’t been used to of late. And that was indeed how it panned out.

The route was actually fairly flat for the first 7 or 8 miles. But it was over sand and water as well as being into a headwind. Linn’s legs were already shot after the first 10km. The rest of it was a battle of will where she tried with all her might to keep smiling and keep going but it was a tough old journey.
From the 16th mile onwards there were plenty of hills to contend with and it all pretty gruelling from that point on.

The conditions were typically Swedish April fools’ type of weather with hail and snow on the agenda along with some stormy winds. And the temperature was absolutely freezing as well, registering a -2 degrees on the feels like scale.

One saving grace for Linn though as that she did have friends and family out there crewing for her and helping to get her through it.
Knowing what the hardcore Swedish ultra runners were like, Linn was expecting to be some way down the pecking order but her aim was to get round in between 6 and 6-and-a-half hours. 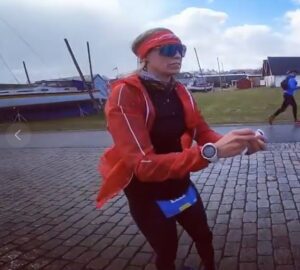 She fulfilled those expectations, crossing the line in 6 hours 27 minutes and 51 seconds. That put her in 64th place overall out of the 280 who successfully made it to the end. There were a number of retirements as well out of those who started the race, emphasising how brutal it was.

In the F45-49 category, Linn was third fastest, which wasn’t a bad result in a race where she was up against most Swedish competitors who would have had more experience at running in those kinds of conditions. 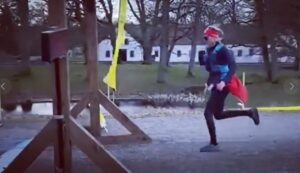 The top female in the race was Lena Trillelv of Team Salomon and she got round in 5 hours 10 minutes and 2 seconds, putting her in 5th position overall.
Then it was Lisa Eneroth of Malmö Löp who completed the course in 5:45:41 and came 22nd overall. Erika Frick was third female and 24th overall in 5:49:11.

The overall winner of the race was Christian Mahlström of Team Blekringe who finished in 4:43:52. Then it was Patrik Nilsson taking second place in 4:57:41. Henrik Molin was third in 5:00:32. 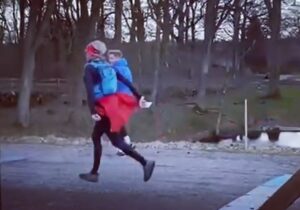 There were some learnings to take out of it for Linn and one of them was that three weeks isn’t really enough time to recover from a tough hilly ultra, or at least not enough time to be feeling fresh and ready for the next one.

She also may prefer to do her own training runs next time as opposed to using races as training runs as she feels that isn’t really the right approach for her. 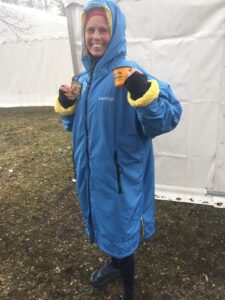 The experience she’d had at the Österlen Spring Trail 60k had even left her questioning whether she’d lost her inner Viking. The answer to that question is of course no though. Having spent all these years in a milder English climate though and doing all her training in those kinds of conditions, it’s going to be hard when you get exposed to the rougher Scandinavian weather.

A true Viking doesn’t throw the towel in though and Linn didn’t. Even though it was exceedingly tough, she stuck at it and saw it through till the end and having this run her belt can only server to make her stronger going into her Centurion Running South Downs Way 100 mile race.