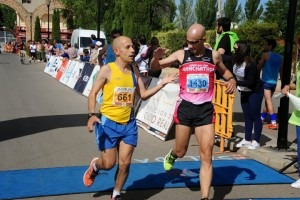 Steve Way, as reported in the Evening Echo, continued with his preparation for the Commonwealth Games in Glasgow, soon to be upon us, with a win at the Littledown Marathon on Sunday 15 June. This event takes place at the Littledown Centre, Bournemouth, and consists of 26 laps of the 1 mile loop marked out in the Centre grounds. Despite its unusual format, the race attracts an increased entry each year, with 69 finishing in 2014. Steve‘s time of 2.27.10, which was some three minutes faster than he had intended, was a new course record, breaking the record which Steve himself set last year. Also completing the marathon was Club Captain Billy McGreevy, finishing in 7th position.  Speaking of course records, we omitted to mention previously that Emma Dews‘ PB run in the Bournemouth Parkrun on 14 June was a new course (female) record.
At the Upton House Time Trial on 6 June, the second of the summer series organised by Poole Runners, BAC were represented by Peter Thompson, 5th in 20.06, Billy McGreevy, 6th in 20.21 and Tom Paskins, 15th in 21.46. Peter won the first Time Trial in 18.32 so was clearly not on top form on 6 June, but overall leads his age category, with Billy second.
Meanwhile, Antonio Ruiz, who ran for BAC and also helped out with coaching during a recent stay in Bournemouth, continues to fly the BAC flag in Spain. Recently, proudly wearing his BAC vest, Antonio finished the Argamasilla de Alba 10k in 37th position (of about 800 total) in a very respectable time of 37.14. Antonio clearly continues to benefit from his BAC training! 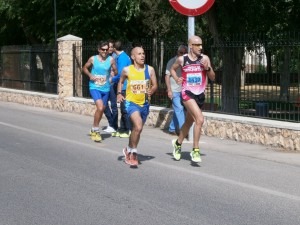 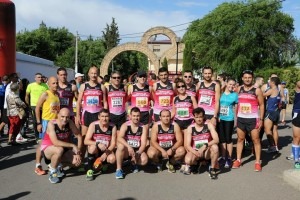 Antonio Ruiz with his Spanish team-mates