London 10k and Parkruns and Update 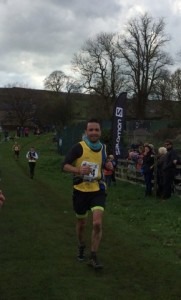 After the amazing weekend of Steve Way‘s new 100k British Record (and subsequent selection for the England Marathon Team in the Commonwealth Games) and Steve‘s and Jon Sharkey‘s part in the England win in the 100k Anglo-Celtic Plate, followed the next day by BAC medals and team wins in the North Dorset Village Marathon, led by Toby Chapman and Jez Bragg as gold and silver medallists respectively, the next two weekends have been relatively quiet, but Club Captain Billy McGreevy ran well on Sunday 25 May in the BUPA London 10,000 (10k), finishing 250th (of literally thousands) in 36.23.  Although this is 2 seconds slower than Billy‘s Christchurch 10k time, because he is now one year older, his age-grading for the Championship Table is actually increased .05% to 73.98%! The previous week saw a battle between outgoing and incoming club captains in the Poole Parkrun on Saturday 17 May, with Simon Munro finishing 3rd in 17.13 and Billy 4th in 17.17! Only slightly further down the field (which totalled 625) there was another BAC battle, with Sanjai Sharman and Billy Nixon finishing 12th and 13th respectively, separated by 2 seconds! On the same day in the Bournemouth Parkrun, three BAC athletes achieved PBs for the course, with Paul Consani 4th (of 208) in 18.46, Jud Kirk 7th in 19.50 and Steve Cox 11th in 20.17. Jud was one of 120 brave souls who turned out to run the Bournemouth Parkrun the following week, Saturday 24 May, in torrential rain, and was joined by Damian Boyle, who was 3rd in 18.41, and also by Parkrun regular Joe Price.

It turns out that Billy McGreevy wasn’t the only BAC athlete competing in the BUPA London 10,000 (10k).  Also running, and running well, was Rob McTaggart who finished 53rd in 32.24, 2 seconds outside his PB and his best time since 2012, and not far behind was Karl Welch, 217th in 36.46.  That was 25 May.  One week earlier, on Sunday 18 May, Mark Hargreaves and Roy Long were running in the Netley 10k, Southampton, with Mark finishing (in a field 500) 16th, and 1st M50, in 36.24, followed in 20th position by Roy, 36.49.  Going further back, 17 years in fact, in 1997 three BAC vests were on display in the Yorkshire Three Peaks race, worn by Ian Graham, Nick Kenchington and Neil Schofield, on the occasion of Ian‘s 50th birthday, which fell on the day of the race.  In 2014, the BAC vest could again be seen in this race, occupied by Damian Boyle, who completed the course in 4.22.59 and was 305th of 704.  This is a fell race taking in the three Yorkshire peaks of Pen-y-Ghent, Whernside and Ingleborough and is marathon distance.  Damian‘s time was ranked ‘second class’ of the classifications ‘elite’ (there were very few ‘elite’ runners), ‘first class’, ‘second class’ and ‘standard’ so Damian‘s run was highly creditable on a tough course very different from our normal competitions.  As it happens, the Yorkshire Three Peaks race was during the same weekend and in the same area as the 100k Fell Race, in which Jez and Gemma Bragg competed (see earlier report), so BAC vets could be seen all over that part of Yorkshire!  There is also another race involving BAC athletes, which Peter Thompson won and in which Billy McGreevy came 5th (despite getting lost!) and Billy will be sending in details………………………..