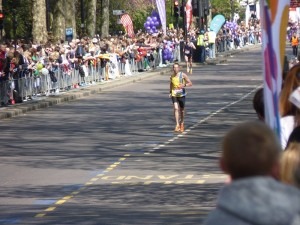 Are there sufficient superlatives to describe Steve Way’s achievement in the London Marathon on Sunday 13 April 2014?  His PB of 2.16.27 resulted in a finish in 15th position overall (1st of the ‘non-elite’ runners), 3rd Briton (after Mo Farah and Chris Thompson) and a qualifying time for the Commonwealth Games in Glasgow later this year.  Steve will be running for England in an International 100k in three weeks time and has his eye on the 100k World Championships, and was originally planning to run a paced 2.30 London Marathon.  But he felt he was in the form of his life and posed an ‘Ask the Audience’ question on Facebook – in these circumstances, should he ‘go for it?’  The overwhelming majority of the more than 100 responses was that he should – which really confirmed what Steve was going to do anyway!  The outcome showed that this was exactly the right decision, particularly as, as Steve said, he has never felt stronger after a marathon than he did following Sunday’s race.  Steve was picked up by the BBC as he approached the finish with the commentators quickly looking up his statistics and reporting on his previous PB and also mentioning his club.  The Times, in one of their reports on Monday 14 April, talked, of course, about Mo Farah, and then said “it was a good day for the other Britons in the elite mens’ field”.  They then mentioned Chris Thompson (2.11.19), and Ben Livesey and Scott Overall, to both of whom Steve had shown a clean pair of heels, their times being 2.17.44 and 2.19.55 respectively.  So Steve is now officially the third fastest marathon runner in the country, and is ranked No 1 V35 at the marathon distance.  There is no doubt we have a National Treasure in our midst and we are very, very proud.

Of course, Steve was joined in the marathon by numerous club-mates, and there were particularly solid runs by Jacek Cieluszecki (24th 2.27.45) and Peter Thompson (76th 2.34.16).  For some reason it takes ages for the club positions to be announced, but a look at the results seems to indicate that Kent AC may have won, but, thanks to Steve, Jacek and Peter, BAC is vying with Serpentine for silver and bronze.  Next to finish was Graeme Miller, with a massive PB and achieving his objective of sub 2.45 comfortably with 2.43.44.  Sanjai Sharman was wearing his BAC vest for the first time, and it clearly suits him and his running, with a very respectable 2.56.20.  Sanjai is a welcome addition to the club.  We don’t see much of Paul Chapman in training, but training he obviously is, with a time of 3.04.03.  Simon Way was unfortunate enough to sustain an injury in the first few miles, which meant some walking and 30 minutes for the first 5k!  Simon kept going however and there are many who would have been very pleased with his time of 3.09.43.  Duncan Wells’ time of 3.11.54 was a PB but Duncan wasn’t too happy with that and probably it won’t remain his PB for too long.  Richard Nelson felt before the race that he wasn’t really in top form and had decided that he was going to run well within himself from the start, and was content with finishing in 3.15.04.  We all know Paul Consani is capable of better than his time of 3.24.24, this wasn’t really Paul’s day.  Similarly, Caroline Rowley declared herself not entirely content with 3.42.33, but nevertheless Caroline looked very relaxed at the Red Lion pub, where everyone met after the race!  Andy Gillespie was very disappointed with 4.11.54 after much hard work and good training, but well done to Andy for finishing at all, considering he pulled a calf muscle at 5k, making the rest of the course painful and uncomfortable.  Don’t forget Andy was raising money for the National Autistic Society and donations can still be made to www.virginmoneygiving.com/AndrewGillespie.  Tim Dence, having watched his daughter’s successful run earlier (see below) went on to run his first marathon in 4.32.15 – will there be another?   Peter Gaze, at 70+, continues to astonish.  He ran London in 4.46.18, and this certainly won’t have been his first marathon of the year!

Earlier in the day, Bridget Dence ran in the U15W 3 mile race of the Virgin London Mini-Marathon.  These races are by selection, so you have to be talented just to be selected.  Not only was Bridget selected, but she was 33rd of 282 in her race which she ran in 18 minutes exactly.  Well done, Bridget! 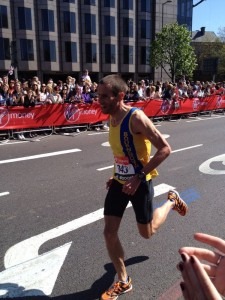 Steve Way – is that a smile? 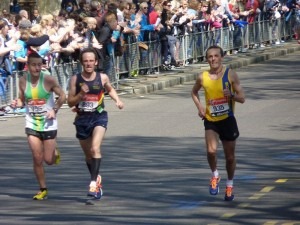 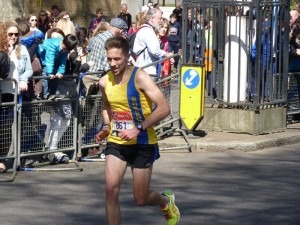 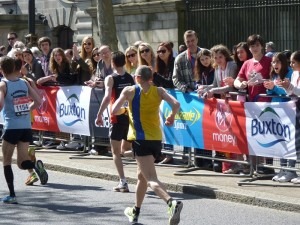 Graeme Miller – running too fast for the camera! 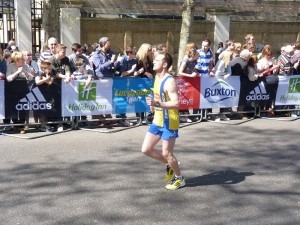 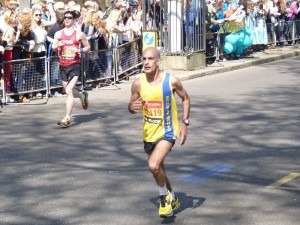 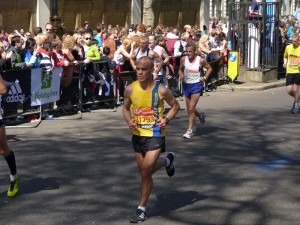 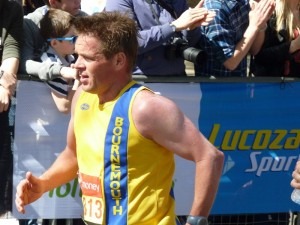 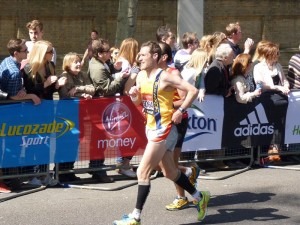 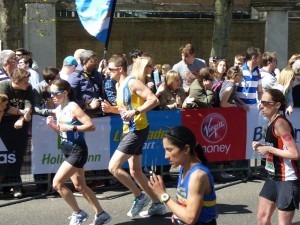